Harps impress in first home game of the season 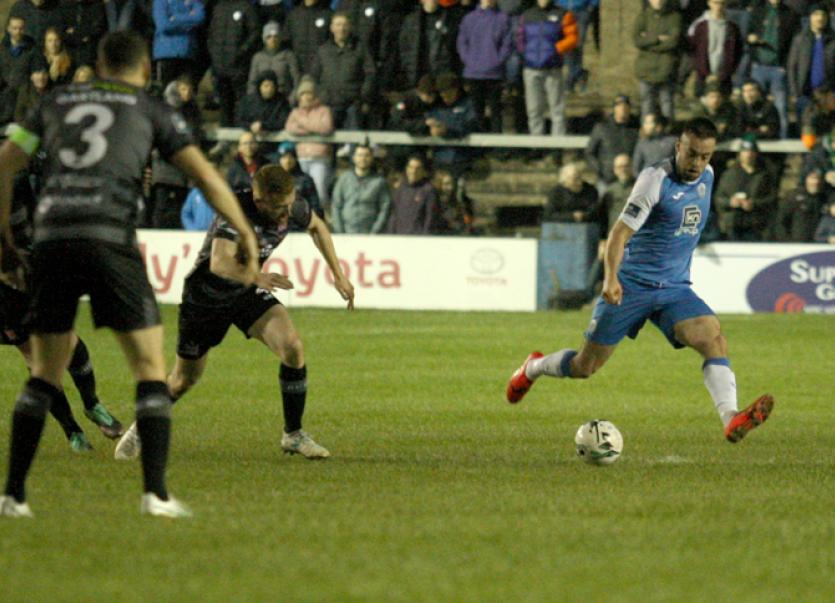 Champions Dundalk had to settle for a point as Ollie Horgan’s new-look Finn Harps upset the odds in a rip-roaring encounter at Finn Park on Friday night.

Harps were good value for the draw. They put in a huge shift over the 90 minutes and defended ever so well against a Dundalk team who have had little trouble against the Donegal side in so many of their previous meetings.

But Harps were up for this one and in new signing Raff Cretaro, they have a player who belied his 37 years with an outstanding display. He was involved in almost everthing that was good about this Harps performance and he rightly received a standing ovation when eventually called ashore late  in the second half.

It was from his corner that Harps stole the lead just before half time - Keith Cowan marking his return to the side with a brilliant headed opener.

And while Harps conceded an equaliser with 20 minutes left, they weren’t exactly hanging on at the finish as Dundalk ran out of momentum and ideas.

The Harps team showed three changes from the side that lost in Dalymount Park last Friday night. Mark Coyle and Cowan both started as did striker Sean Boyd who signed on loan from Shamrock Rovers on Wednesday evening.

They started well and had Dundalk on the back foot in the early stages with Cowan going close with a header from a set-piece early on.

But Dundalk soon found their rhythm and with Michael Duffy seeing a lot of the ball on the left wing, they began to impose themselves.

Duffy forced the first save from Harps keeper Peter Burke on six minutes and the Harps stopper had to be alert to deny Dean Jarvis soon after.

As the half progressed, Dundalk continued to press and Patrick Hoban got his first sniff of an opportunity on 20 minutes when he showed wonderful improvisation, executing an overhead kick from close-range but the ball sailed wide of the post.

Dundalk came closer again on 32 when Dean Massey’s wonderful free-kick struck the crossbar and minutes later Dean Jarvis saw his goalbound header strike a Harps defender and loop up and over.

It seemed only a matter of time before Dundalk’s pressure would count. Which made the Harps goal on 42 minutes all the more surprising.

The home side enjoyed a good spell of possession and as was the case in the opening minutes, the Dundalk defence were looking nervous under pressure from the Harps frontline.,

Harps’ perseverance paid dividends when they won two corners in quick succession and it was from the second set-piece that Raf Cretaro’s delivery was powered home off the head of Cowan.

The expected onslaught from Dundalk after the break never really happened and if anything, Harps were the better side for the early stages of the new half.

In one brilliant break, Nathan Boyle’s pass picked out Cretaro at the end of the box and his effort on goal was beaten away by Rodgers.

Cretaro was excellent in his first home appearance and he almost slipped Boyd through after another lightning attack from the home side.

Both teams made changes after the hour with Mikey Place coming on for the tiring Boyd and Daniel Kelly replacing John Mountney on the right for the visitors.

Kelly was quick to get involved and he delivered a lovely inviting cross which was crying out for a touch., Minutes later he won the corner that led to Dundalk’s equaliser - Michael Duffy’s delivery headed in by Brian Gartland.

Harps regrouped and they almost got their noses in front again when substitute Niall McGinley ran onto a clearance but as he bore down on goal, he took too long in possession and  a Dundalk defender was able to intervene.

The visitors, try as they might, just couldn’t find a second and Harps deservedly held out, meaning the champions remain without a win after two games.