FORWARDS SHOW THE WAY WITH SOME GREAT POINTS 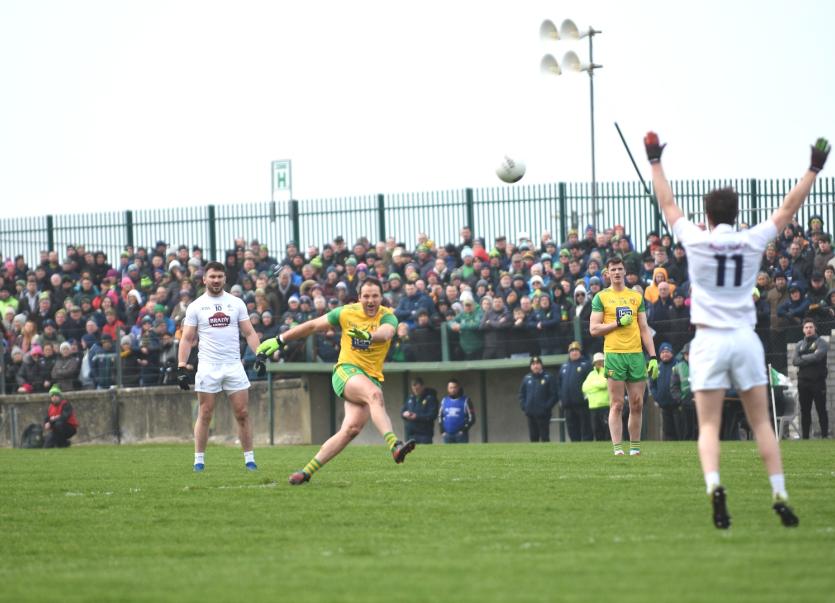 Michael Murphy has a shot at the Kildare goals Picture: Geraldine Diver

Donegal are back in the top flight of Gaelic football after a convincing victory over Kildare in Fr Tierney Park, Ballyshannon.

Donegal never looked in trouble, putting in their best shift of the year against a disappointing Kildare side in front of an attendance of 3,520.
The strong wind was a major factor but there can be no excuses for Kildare as Donegal were superior in most areas of the field and especially in the forward lines where young players Niall O'Donnell and Oisin Gallen impressed.
Donegal had the advantage of the very strong wind in the first half and they took full advantage, hitting some great long range points.
They were 0-13 to 0-1 ahead when Paddy Neilan sounded the half-time whistle with eight different scorers in a dominant first half.
Just like in Cork the previous week, Jamie Brennan had the opening point with just over a minute on the clock. After that the points flowed. By the 11th minute Niall O'Donnell, Oisin Gallen, O'Donnell again, Michael Murphy (from a '45' and a free) had stretched the lead out to 0-6 to no score.
Kildare had a chance but a Kevin Feely free came back off an upright. The Lilywhites recorded four first half wides as well, and all at the same post at the Rock Hospital end of the ground.
The impressive Oisin Gallen, Hugh McFadden and Jason McGee added to the Donegal lead before Kildare's only point of the half when Neil Flynn converted a free in the 24th minute.
Donegal kept up the pressure and further points from Niall O'Donnell (with his left), Gallen, Dáire Ó Baoill and Ryan McHugh put the Donegal men into a 12 point interval lead. Some of the points came after some great moves with Leo McLoone pivotal to a number of those attacks.
It got worse for Kildare at the start of the second half as they lost Eoin Doyle to a black card and then Kevin Flynn picked up another black, followed by a red, as he was yellow carded in the first half.
They did get the first point of the new half from Paddy Brophy but Donegal hit back with points from Oisin Gallen and Michael Murphy. Adam Tyrell and Ryan McHugh traded points before Jason McGee put Jamie Brennan through and he found the Kildare net on 47 minutes to stretch the lead to 1-16 to 0-4.
Kildare did get a few points thanks to substitute Adam Tyrell, but Jason McGee fisted one for Donegal at the other end.
Neil McGee was introduced to a great roar to equal the Donegal appearances record of Colm McFadden on 173.
Ryan McHugh first timed the 18th point for Donegal before Adam Tyrell had his fourth of the half for the visitors.
There were a few other big cheers as well with the return of Frank McGlynn for his first game of the year while Michael Murphy powered over a point against the wind with a minute left.
Kildare did create a goal chance right at the death but Chris Healy was denied by a great save from Shaun Patton.
It was a comfortable victory for Donegal as they go back to Division One for next season.