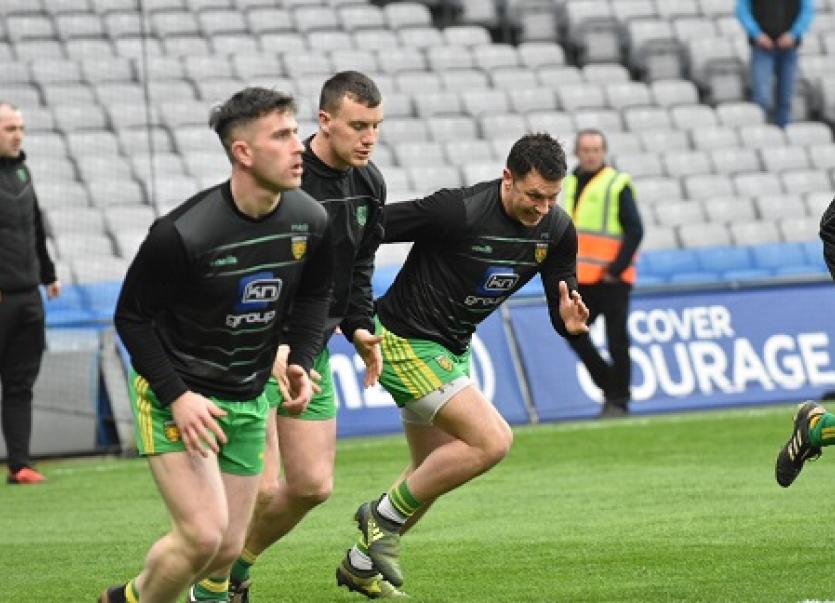 The famous “Grandstand” in Donegal’s greatest Gaelic Amphitheatre was really rocking after they saw one of the finest contests in Towney for many years.

This was a glorious Good Friday, a kissing wind with the breath of summer, especially for Kilcar, and the magnificent Patrick McBrearty who had one of his finest ever hours.
McBrearty hit 0-10, but more importantly was at the hub of all that was good about this impressive Kilcar side that prevailed in the absence of the injured Eoin McHugh, Mark McHugh, Barry Carr, Aodhan McGinley and Andrew McClean.
And they lost Stephen McBrearty at half-time with a thigh strain which puts this victory firmly in context.
Neighbours Naomh Conaill also richly contributed to this cracking encounter with a real championship edge by refusing to yield and hammered in two late goals to set up a frenetic finish where efficient referee James Connors played 11 minutes of extra time as the sun began to set on the bay.
It looked really black for Glenties when Kilcar’s athletic Matthew McClean kept his eye on a high hanging McBrearty lob and punched the ball to the Naomh Conaill net in the 45thminute to put Kilcar into a pretty unassailable lead of 1-18 to 1-10
But Glenties threw on the towering Kieran Gallagher and peppered the Kilcar goalmouth with high balls that yielded two goals, from Leo McLoone and Gallagher who turned McLoone’s low hard cross to the net to narrow the gap to 1-21 to 3-10 with five minutes to go.
Glenties threw everything into attack, but McBrearty played a “Michael Murphy” role, dropping back to midfield to win vital possession over the next fifteen minutes.
And he was ably assisted by that darting dervish that is Ryan McHugh, Ciaran McGinley and Brian O’Donnell as Kilcar held on for a deserved victory in a truly thrilling affair.
The game began at a cracking pace with Kilcar fastest to settle as they sprinted to a 0-3 to 0-0 lead by the 6h minute.
Glenties spurned two easy chances of points in this period, before Stephen Molloy got them off the mark.
And that set the tone for a real cracker with some heavy hits, great moves and a few exquisitely crafted scores from both sides.
McBrearty was deadly accurate from frees while Ciaran Thompson and Eoghan McGettigan were driving forces for Glenties who have a tough few days ahead with clashes with St Eunan’s on Sunday and Gaoth Dobhair on Wednesday.
But it was Kilcar who were firing on all cylinders as they eased into a 0-9 to 0-4 lead thanks to a soaring point from Ryan McHugh which some Glenties fans claimed was wide.
It was that sort of frenetic old- style attacking game, with both sides determined to outscore the other and both benches gave referee James Connors some vociferous and prolonged advice.
Brendan McDyer injected some real drama when he scythed through the Kilcar defence and hit a cracking goal to leave just two points between the sides.
Still, the home side were always able to get the scores when they needed them, and they were well worth their half-time lead of 0-12 to 1-6.
That set up an equally memorable second half and a great advertisement for Donegal football.