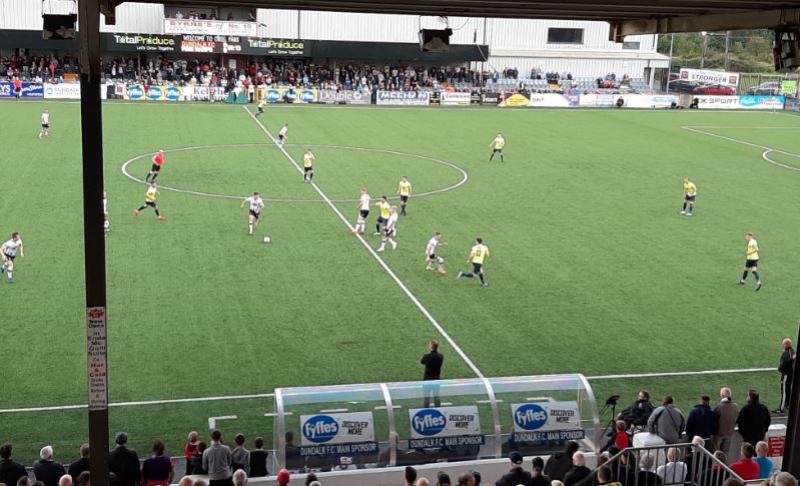 Ten man Finn Harps were outclassed by classy Dundalk as the champions romped to a comfortable 5-0 win at Oriel Park on Friday evening.

Treble-chasing Dundalk showed just why they are the best team in Ireland as they brushed aside Finn Harps in style at Oriel Park in front of an attendance of 2,217.

Harps trailed 1-0 at half-time but the dismissal of Mark Russell was costly and it was backs-to-the-walls stuff in the second half for Ollie Horgan’s charges.

But ultimately the gulf in class was just too much as Dundalk tore Harps apart, to move 39 points ahead of the Donegal club who remain second bottom.

Harps showed four changes from the side that lost against Shamrock Rovers last week, with Jacob Borg, Keith Cowan, Nathan Boyle and Mikey Place starting while Colm Deasy, Josh Smith, and Raffaele Cretaro dropped to the bench, with Mark Timlin not involved.

Sam Todd, the Inishowen 21-year-old, was named as captain as Horgan continued his recent policy of rotating the armband.

Dundalk made six changes from the side that made its exit from the Europa League qualifiers on Tuesday, with Burt’s Georgie Kelly named in the starting line-up by manager Vinny Perth.

It took the Lilywhites some time to get into their stride but they gradually began to wear down the stubborn Harps defence.

Sean Hoare, Sean Murray and Chris Shield had opportunities before Patrick McEleney clipped the crossbar as the half-hour mark approached.

Sean Murray was becoming increasingly dangerous and on 36 minutes he was involved in the build up that let to Daniel Kelly creating space inside the box and letting fly with a cracking shot to the back of the net that gave Mark Anthony McGinley little chance.

And Harps’ task was then made all the harder when Mark Russell (pictured) was sent off on 39 minutes, harshly as a second yellow was brandished just in front of the Harps dug-out.

Harps finished the half on a more positive note with Harry Ascroft twice causing bother in the home defence with two efforts that both resulted in corners.

Dundalk began the second half on the front foot with a number of pots on goal, including one from Georgie Kelly who was denied by the advancing Mark Anthony McGinley who spread himself well to save.

And McGinley had to be quick to get down and put a McEleney shot around the post in the 52nd minute and made further saves to thwart Hoare and Murray and Daniel Kelly .

But a mix-up in the Harps defence on 62 minutes led to the second Dundalk goal. Substitute Joshua Smith played a ball short and Georgie Kelly nipped in to force it past the advancing McGinley.

And Patrick McEleney pounced from close range to make it 3-0 in the 64th minutes as he got onto a Cameron Dummigan cross.

Jamie McGrath nipped in to make it four on 75 minutes with Harps being stretched to the limit.

And Dundalk could have had more with Todd clearing a Patrick Hogan effort off the line and several other chances going abegging including one from Hoban when he somehow put the ball over the bar when it looked easier to score,  a shot from Daniel Kelly that flashed across the face of goal and wide, and a curling McEleney shot that was saved by McGinley.

Dundalk felt they should have had a penalty when Hogan went down under a challenge from Smith.

But McEleney eventually got his second and the fifth for the Louth side as he curled the ball home to cap a fine personal and team performance by rampant Dundalk who are firmly on course for another league title.

On the eve of the club’s 50th anniversary of its first senior game as a League of Ireland club, this was a heavy defeat for Harps, with the only consolation being the news that the side below them in the table, UCD, were thumped 10-1 by Bohemians at Dalymount Park.

Harps remain six points above the students, with a far superior goal difference although the students do have a game in hand.