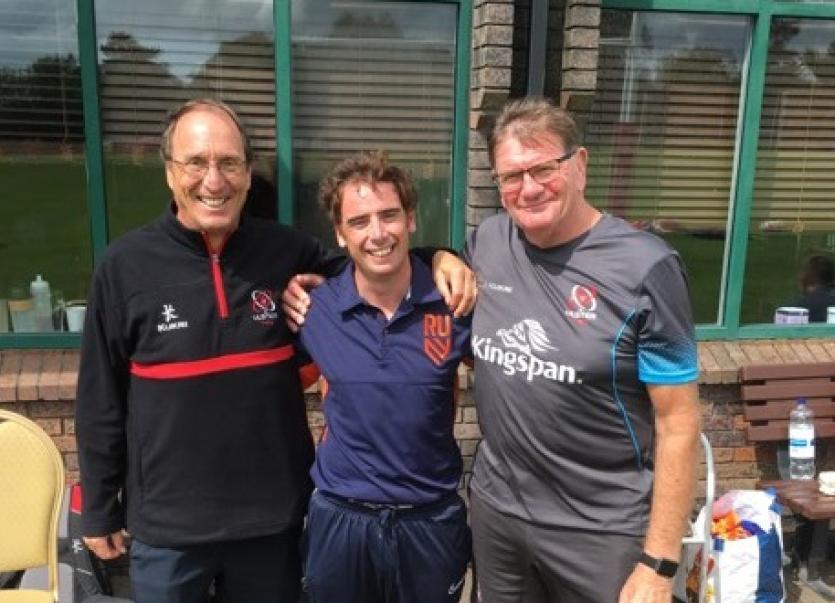 Ballyshannon's Simon Gillespie has taken a new career course in New York - switching from GAA to rugby, after being announced as the new team manager and assistant coach of Rugby United New York (RUNY), the first professional rugby team in the Big Apple.
Rugby United New York is a professional rugby team who joined Major League Rugby as an associate member in 2018, playing a brief, but successful exhibition season. Their first full MLR schedule will take place in 2020.
The two big player names who have signed for the coming season are former England full-back Ben Foden and French centre Mathieu Bastareaud.
Gillespie has worked for a number of years as Games Development Officer with New York GAA and although this will be a completely new departure, he will not be lost to the GAA.
"This will be absolutely new for me and there will be many back in Ballyshannon wondering about my rugby coaching skills," laughed Gillespie, when contacted this week.
"I will not be beaking my links with the GAA. I will just return to being a volunteer like everyone else. I am still the only qualified tutor in New York and I will be helping out in any way I can."
But as and from this week the O'Neills round ball will take a back seat and it will be a Gilbert of Canterbury that will take its place.
The former Aodh Ruadh player and coach is looking forward to what will be a completely new challenge. The chance came about after an invitation from the new rugby franchise owner, James Kennedy, a Limerick man, to give a kicking and blocking coaching session.
"I had played a bit of rugby with Ballyshannon RFC from U-14 up to senior and also at college in Limerick, but not to a high standard.
"Rugby is the fastest growing sport in America and I was delighted to get the opportunity to be involved," said Gillespie.
Rugby United New York is the first professional franchise in the city and they will join 11 other franchises split into an Eastern and Western Conference. The league season does not begin until February 9, 2020, but Gillespie's work as manager and Academy coach begins right away.
He already has spent a week's placement at Gloucester where he came under the tutelage of former Ireland outhalf David Humphries, and a further period was spent with Ulster Rugby.
"I was surprised to find that Humphreys had a house in Donegal and that Willie Anderson could talk about all the great beaches in Donegal like Rossnowlagh," said Gillespie, who said he was surprised to meet former Tyrone strength and conditioning coach, Peter Donnelly, at Ulster Rugby, where he has now taken up an appointment.
"There is a lot of transfer between GAA and rugby, a lot of crossover in the skills of the game."
Gillespie's role will be mostly in the management area, organising the logistics, and with a lot of travelling to places like San Diego, Atlanta, Toronto, Houston, etc., it is going to be a busy time.
Along with the managment side, Gillespie has a role of skills coach and will also do video analysis for the franchise.
"We have eight full-time staff but all have multiple tasks." The franchise does not have a home as yet and are planning to move their home games around from New York to Connecticut to New Jersey. "It will be an opportunity to showcase the franchise and give people the opportunity to see the game of rugby."
Gillespie will also lead the RUNY grassroots program as the Academy Director. Managing logistics, identifying up and coming talent, as well as creating new rugby programs in local communities are among the duties that Gillespie will be performing.
“Simon is a highly skilled and experience coach, with an impressive resume in sports development in New York,” stated James English, General Manager, RUNY. “He brings a wealth of knowledge and a fresh perspective that will be a great asset to use as we look to support and further promote rugby in the Tri-State area."
Up until this departure Simon Gillespie primarily been involved with the GAA in New York from 2010 until this year where he has focused his coaching efforts on Gaelic football.
The 2020 Major League Rugby season is set to kick off this February. Rugby United New York are placed in the Eastern Conference with fellow 2019 playoff-side Toronto Arrows, as well as the NOLA Gold, and expansion franchises New England Free Jacks, Old Glory Washington DC, and Rugby ATL (Atlanta).
The Western Conference is headlined by back-to-back champion Seattle Seawolves, back-to-back playoff side San Diego Legion, rounded out with the Glendale Raptors, Utah Warriors, Houston Sabercats, and Austin Elite.
It is a major new adventure in professional rugby in the USA and Simon Gillespie is very happy to get the chance to be involved. Apart from the two well-known players in Foden and Bastareaud, there are quite a number of Ireland U-20 and Munster and Leinster Academy players signed up.
The rugby league is in its infancy in the US but keep an eye on it as it is likely to grow quickly in the next few years. With Gillespie involved, the interest in rugby down The Abbey in Ballyshannon is also set to expand.