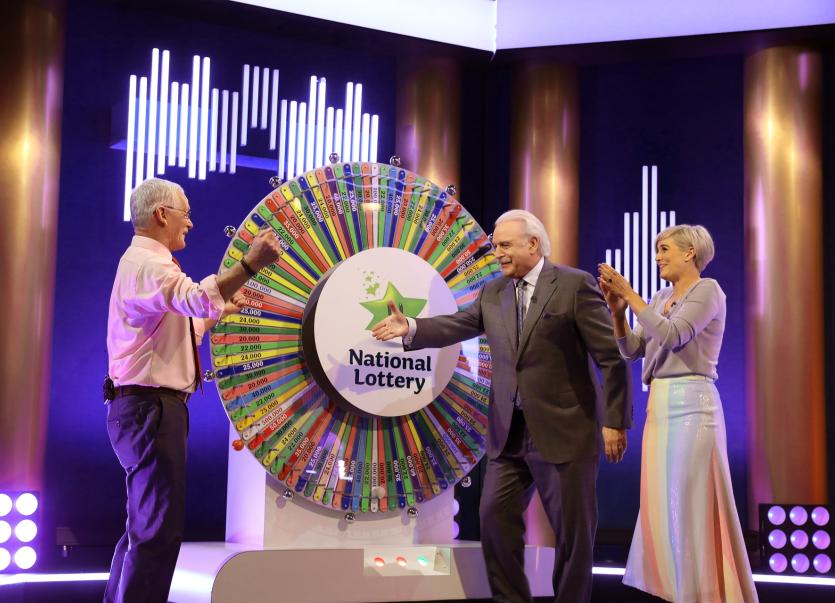 A B&B owner from County Donegal spun the Winning Streak Wheel on Saturday night’s show and won €100,000 bringing his total haul from the National Lottery TV game show to €163,000.

Hilary Keller from Buncrana, navigated the game show, on RTÉ One, to perfection, winning an impressive €60,000 in cash from the show as well as a holiday to Venice, Italy worth €3,000. Hilary’s luck did not end there as he ended up being the lucky player that got the chance to spin the iconic Winning Streak Grand Prize Wheel.

His spin resulted in the ball landing in the €100,000 segment after it took a few bounces either side, as the RTÉ studio audience fell silent in anticipation.

Hilary spoke of how last weekend, while watching the show, he was left with his head in his hands as his wife, Margaret danced around the sitting room in excitement last Saturday evening as they watched on as Hilary’s three-star scratch card was pulled from the drum by Marty Whelan and Sinead Kennedy to appear on the show.

Hilary and Margaret run the Clock Tower B&B in Buncrana. The couple, who are well travelled people, have three children living all over the world and even welcomed their daughter and grandchild home from Abu Dhabi for the Winning Streak occasion.

Their daughter Louise, who works in Abu Dhabi, was so excited at her dad’s Winning Streak appearance that she booked a flight to come home to cheer him on from the audience alongside her son, Oliver. Hilary’s two sons Declan and Gerard were watching on the RTÉ player from their respective homes in Cape Town, South Africa and Perth, Australia.

Hilary also has five grandchildren: Oliver (who watched on from the audience), Niamh and Eamon (who watched from South Africa) and Lily who watched from Abu Dhabi and Mia who is only a few weeks old in Perth. As well as his own children spread across the globe he also has sisters (Margaret and Genevieve) in London and Florida.

Hilary and Margaret have run the Town Clock B&B in Buncrana for the past 27 years which is hugely popular in the peak summer months. The couple met in London, with Hilary moving across when he turned 16 to work in London. The pair returned to Ireland in 1977 to live in lovely Donegal.

Hilary spent six years in South Africa as a child where the family moved when his father, a chef, got a job in a town called Hermanus. As fate would have it, his own son Declan now lives just a few miles from that town with his family. Hilary was reared in a town called Downings in Donegal but was born in Belfast.

With his winnings from the show, Hilary and Margaret plan to do some more travelling and think Route 66 in the US may be on the cards.

The National Lottery game show is co-presented by Marty Whelan and Sinead Kennedy and features some perennial favourite games including Play or Pay, Roll for Riches, WinFall and Electric Dream – where one player will win an electric car worth €25,000.

As ever, one of the lucky five players will get the chance to spin the wheel and win up to €500,000. An exciting element of the show is that one €100,000 segment will be added to the Grand Prize Wheel every show if less than that amount was won in the previous show, improving players chances to win a massive prize.