Ireland beat Samoa to march on to quarter-finals 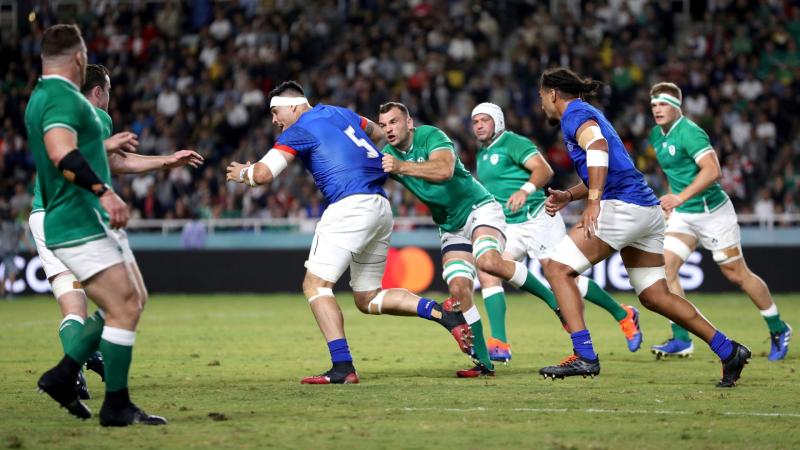 A rejuvenated Ireland secured the bonus-point victory that ensured their qualification for the quarter-finals, despite playing the final 52 minutes with only 14 men after centre Bundee Aki became their first player to be sent off in a RWC match.

After confidence-sapping performances against Japan and Russia, Ireland needed to put down a marker ahead of the quarter-finals, where New Zealand or South Africa await. It took them only three minutes to show their intent.

Captain Rory Best found Iain Henderson with a lineout throw close to the Samoan line and then got himself on the end of a rolling maul the underdogs couldn’t cope with. Johnny Sexton kicked the extras from the touchline and his team had the emphatic started they needed.

The Samoan cause was not helped when hooker Seilala Lam was shown a yellow card on six minutes after a shoulder hit to the head of Jacob Stockdale, with referee Nic Berry only reducing the sanction from a red because the Irish winger was bent low when the contact was made.

Sexton, who was controlling the game beautifully, converted from the 22m line and then turned try-scorer on 20 minutes when set free by an electric Jordan Larmour line break.

With Paulo back on the pitch, Samoa finally fired a shot, with captain Jack Lam forcing his way over following a lineout. It was a reminder of the Samoans’ physicality and power and gave the underdogs a glimmer of hope.

Three minutes later Berry pulled the red card from his pocket and there were gasps around a stadium full of Irish fans.

The first hit of trouble came when Robbie Henshaw fired a ball over Stockdale’s head. In the ensuing scramble Aki – who is of Samoan descent - hit the ball-carrier UJ Seuteni high and hard with a shoulder that sent him crashing to the turf, clearly concussed.

While the tackle was poorly executed rather than malicious, this time the official could find no mitigating circumstances.It was only the third red card received by an Irish player in the professional era and the first since June 2016, when CJ Stander was sent off against his native South Africa.

Any fears that Ireland might being unravelling were put to bed two minutes before the interval when Sexton again exposed hesitancy in the Somoan defence to run in the bonus-point try and give his team a 26-5 lead at the interval.

After that, it was just a case of how many more tries Ireland would add and Conor Murray’s brilliant cut-out pass on 48 minutes sent Player of the Match Larmour in for the fifth. Sexton converted and was promptly withdrawn, with his half-back partner Murray quickly following as Ireland’s thoughts began moving to Tokyo next weekend.

Replacement flanker Peter O’Mahony almost provided the sixth but the TMO could see no grounding. No matter; Stander bulldozed his way over after intense Irish pressure.

Andrew Conway came off the bench to pounce on replacement fly-half Joey Carbery’s grubber kick and scored the seventh try and his third of the tournament. It was all too easy, but Ireland will not complain. They are back to something close to their best form and move into the last eight with their confidence restored.