Three hour journey for Donegal soccer team to play a game within their own county!

You could fly from Dublin to Rome in the same time 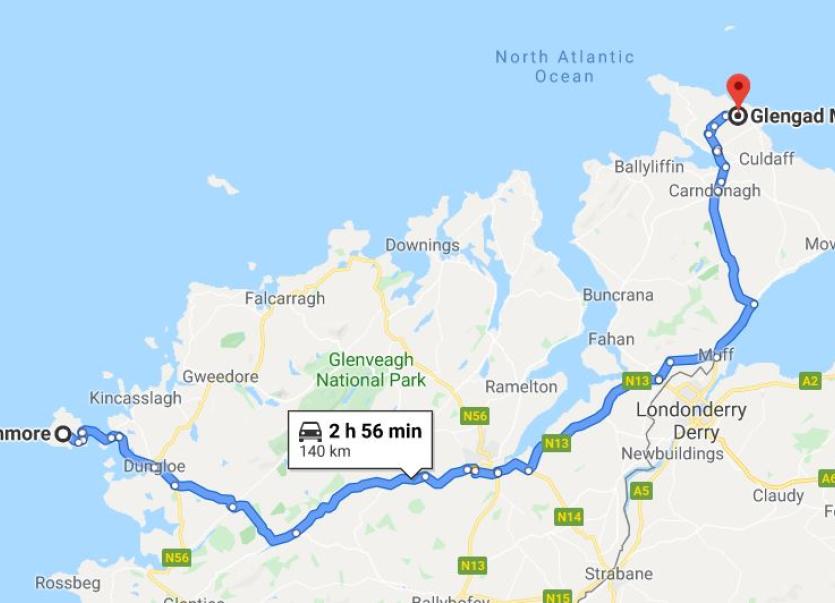 “It’s time to get up lads - you’ve a 7.45 am ferry to catch” - that will be the message before the sun rises over the Atlantic for the players, management and supporters of defending Ulster FA Junior Shield champions Arranmore United this Sunday.

The west Donegal side will have to be up before dawn to get ready for what will be a three hour plus trip to face another side in the county, namely Inishowen League outfit, Glengad United Reserves.

It could hardly be a worse draw in terms of travel, as Ireland’s only island-based soccer team has to make the long trek to what is the country’s second most northerly club.

A quick check on google maps reveals that it is a 140km trip from Arranmore to Glengad, with an estimated time of two hours, 57 minutes. There is also a note that states “this route includes a ferry.”

To put it in context, the trip is a similar length to travelling from Bundoran to Athlone, or time-wise, flying from Dublin to Rome.

“We’ve got the match brought forward to 12 o’clock,” explained Arranmore PRO Frankie Early, who added that they will be away on the 7.45 am ferry.

The bus from Burtonport will then stop off en-route to collect some more players in Letterkenny and it will probably be after five before those on board from the start will get back to the island.

Arranmore have won two out of their six games so far in the Glencar Inn Saturday League Division One.

As is often the case, they have had to grapple with the loss of some players since the previous campaign. Indeed, the whole midfield from last season is gone. Training on the island during the week can often comprise of just a handful of players. While there are players from Lifford, Ballyshannon and Castlefin in the panel, it remains essentially a team of native islanders, although there are well scattered. A good chunk of them are in the Letterkenny area, but others are dotted around the country (main attending third level colleges), and the trip home for the weekend frequently involves lining out in the orange and black colours.

Early, along with captain Michael McHugh and regular goalscorer Gavin McGlananaghy, are calling the shots from the sidelines these days.

While they have not set the league alight, Early points out that in three of their games to date they lost by the odd goal while they were well understrength when they got heavily beaten by Keadue on the opening day of the season.

He notes that against top of the table Donegal Town it was only a stunning late strike that finally sunk them.

Looking ahead to the rest of the league campaign, he says: “We will hold our own.”

Glengad United Reserves play in the Strand Hotel Division One of the Inishowen League, and have lost just once in eight league games and currently lie second.

It will be a tough game for Arranmore, but no doubt they will be determined to defend their title, which they won back in April when they defeated Cockhill Celtic Youths 3-1 after extra-time.