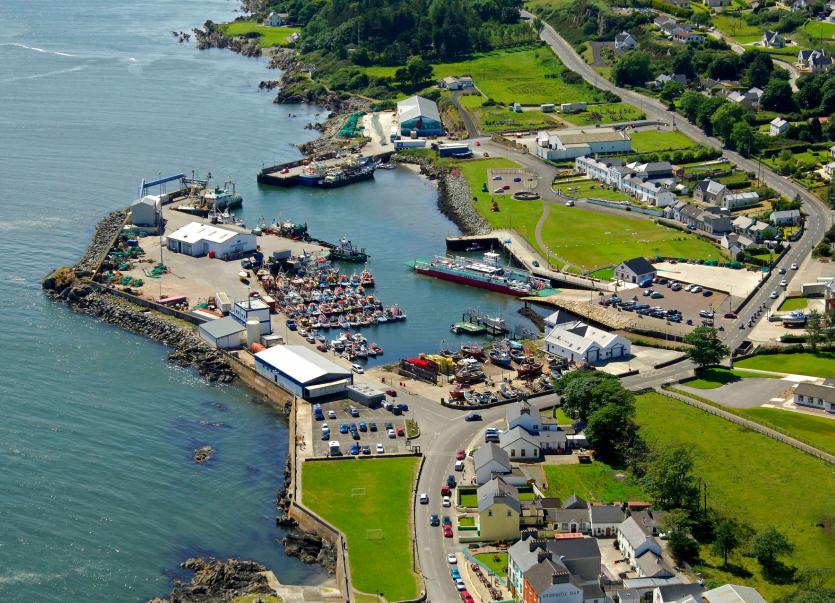 A Greencastle Harbour Users' (GHU) presentation to Donegal County Council's Fisheries Committee has been described as “excellent” by an Inishowen councillor.

Cllr Bernard McGuinness said his subsequent proposal the GHU presentation be endorsed by the Fisheries Committee had passed unanimously.

He said: “On Monday, the Fisheries Committee voted to endorse the GHU proposal, which has also been presented to the Department of Agriculture, Food and the Marine's (DAFM) recently established Seafood Sector Taskforce.”

The remit of the Seafood Taskforce is to make recommendations to DAFM Minister Charlie McConalogue on measures to mitigate the impacts of the fish quota share reductions, arising from the EU / UK Trade and Co-operation Agreement, on the Irish Fishing industry and on the coastal communities that depend on fisheries.

Cllr McGuinness said: “GHU made an excellent submission. It was comprehensive, covering as it did everything that needed to be covered in relation to Greencastle Harbour, starting off with the completion of the Breakwater, to enable the harbour to function properly. It has been 10 years now since the Breakwater Project was halted, because of the economic situation of the time.

“GHU also addressed dredging and the fact that fishermen will now be forced to diversify. I think it is really sad that fishermen have been forced into this position but that is the result of Brexit, a last minute decision in the Brexit negotiations. There was very little consultation, particularly with fishermen, on the effects Brexit would have on their livelihoods.

“I have to commend GHU for making the point that Brexit is affecting Greencastle more than any other fishing community in Ireland. We have spoken to the Minister about this and, hopefully, all of these things will help him to fight the case in Government.

“Greencastle is just one of the concerns I have. I also have serious concerns about the smaller fishing harbours around Inishowen, including Culdaff, Glengad, Malin Head and Urris. They too will be affected terribly. We have discussed this at the Fisheries Committee before.

“We met with the Minister and we explained to him our concerns about this. I am of the opinion that the Department of the Marine is out of touch with the fishermen on the sea, because the responsibilities are broken up between so many Departments.”

Seamus Bovaird who is the Secretary of GHU said completion of the Greencastle Harbour Breakwater Project would deliver a safe harbour for the fishing fleet.

He said: “It would also allow for the development of a marine leisure and tourism sector and an offshore services centre supporting evolving offshore energy projects.

“There have been delays in accessing funding to complete the breakwater due, amongst other things, to a lack of clarity on which government department is responsible for maintenance and development of Local Authority harbours.

“If this was resolved, then Brexit Adjustment Reserve (BAR) funding could be combined with other EU funding streams to complete harbour development plan. Phase 1, €15 million, total project €35 million.

“BAR is the EU’s financial response to the challenges posed by the UK’s departure from the EU. Ireland's current allocation from the BAR was €1.05 billion but it is under threat from competing demands from France.”

According to GHU, the existing marina is at full capacity.

The group is proposing pontoon capacity be increased to accommodate the increasing marine leisure and cruising trade. It would also allow for the improvement of the existing cruise liner traffic entering Lough Foyle.

Port Ellen, on Islay, is six hours’ sailing from Greencastle. In cruising terms that is a daysail, in sight of land all the way, which puts Greencastle as the next stop on a cruise down the Western Isles, making it an ideal stop-off harbour for cruise tourism linking the Irish and Scottish sailing routes being developed.

“In Greencastle, the extra space gained could accommodate a boat hoist for boat repairs / anti-fouling / rudder and propeller servicing.

“The BAR fund could be used to supplement funding from the Rural Regeneration Programme, the 'Shared Island' initiative and other funds to create a regional maritime hub in Greencastle.

“GHU also proposed that training facilities in Greencastle Fishery College be enhanced to accommodate the needs of the offshore energy and marine tourism industries.

“The project for a new Sea Survival training facility in Greencastle Fishery College should be re-initiated.

“Where possible, the training needs of those forced to leave the fishing industry should be addressed at local level. When drift-netting for salmon was closed on Lough Foyle, a fund was established which helped the salmon fishers to get training to help them in future job opportunities.

“The Greencastle Community Centre organised courses which brought qualified tutors into the centre to deliver courses at times that suited the participants.

“This meant one tutor travelled to meet 10 students, not 10 students travelling to meet 1 tutor, keeping costs down and participation up.”

At that time, Greencastle Community Centre was delivering navigation classes, VHF courses and ISA and RYA certification courses, two miles from a National Fishery College, which, according to Mr Bovaird, “was not allowed to deliver them”.

GHU believes a bursary should be agreed for each redundant fisherman, or woman, to be spent against receipted, recognised courses to suit the person's individual needs.

The monetary value should be set as part of an overall compensation package recommended by the Taskforce.

“Should decommissioning become inevitable,” Mr Bovaird said. “GHU believes Government should look at options which would allow Sea Fisheries Administration to retain a government pool of sea-fishing capacity to be used to benefit new entrants to the fishing industry in the future.

“This may mean that the Government has to buy tonnage and power with its own money.

“This capacity should to be retained in State ownership but be available to lease out to new entrants, to allow them to get started and to give them time to buy replacement capacity on the open market.”

Mr Bovaird said: “The main power line from Sligo to Donegal is due for an upgrade. We should future proof all coastal power grids to be able to accommodate the reception of offshore energy when it comes on stream.

“Inishtrahull Sound has been identified as the second-best site for offshore power generation in Ireland. Malin Head is 50 kilometres from the ESB’s power station, in Coolkeeragh.

“The electricity grid should be enhanced so that offshore power coming ashore at Malin Head can be delivered to Coolkeeragh, connecting with any wind farms along its route.

“Offshore wind energy will be coming ashore at other points in Donegal as more offshore generators are deployed. Aranmore and Tory Sounds are identified as good sites for tidal current generation and offshore floating wind farms will have good wind and wave climates off Donegal.

“Any underwater collection grid will want to have the benefits of scale to collect power from all offshore sources to deliver the power to the shore grid. Donegal could have 3 offshore grids coming ashore along the coast,” Mr Bovaird said.

Foyle Co-op is currently working on a project to have a test platform incorporated into the completed breakwater.

This is designed to accommodate prototype tidal current generators during their testing phase and, eventually, to have a permanent generation unit installed.

The Co-op is also looking into the introduction of a bio-digestion system to handle its fish waste and to produce power or gas for Co-op equipment.

GHU said both of these developments would feed green energy into the harbour estate to the benefit of everyone working there.

“Any excess could be delivered to Coolkeeragh by an enhanced grid from Greencastle to Culmore,” concluded Seamus Bovaird.
GHU estimated Donegal will suffer the loss of 70% by value and 80% by volume of Ireland’s total loss from the effects of Brexit on Irish fishing effort.

Donegal has already suffered from the government of Scotland’s unilateral closure of fishing ground around Rockall to non-UK fishing boats.

This is an international jurisdictional issue, not a fishery issue, but Donegal will bear the brunt of the resulting loss of fish.

The BAR rules state that the fund “will provide support to Member States, regions and sectors, in particular those that are worst affected by the adverse consequences of the withdrawal of the UK from the Union, mitigating thus its impact on economic, social and territorial cohesion”.

The Fund rules also state: “An additional amount will be allocated to reflect the losses that some Member States will suffer from the limitations in accessing the UK waters for fishing activities.”

GHU is arguing the allocation from the BAR to Donegal should be pro rata to the loss suffered.

Mr Bovaird said: “We are calling for support for this pro rata division. We also see the BAR funding as leverage for other EU funds to support fishing communities and to complement contributions from the Rural Regeneration Programme and others.”