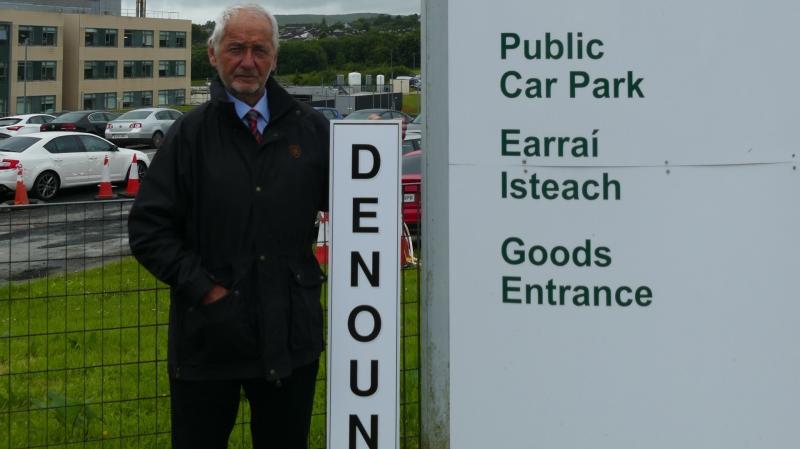 The review was carried out by the National Director of the HSE's Quality Assurance and Verification Division. Its aim was to ensure recommendations made in the Ombudsman's 'Learning to Get Better' report were being actively implemented in the Donegal hospital.

The review came in the wake of a complaint made by Mr Enda Craig to the Ombudsman regarding the “abusive behaviour” he received from a staff member in Letterkenny University Hospital's emergency department and a hospital consultant's “cover up” response to his initial complaint, previously reported in detail in this paper.

The full 'Review Report Complaints Management Process - Your Service Your Say - Learning to Get Better Recommendations, Letterkenny University Hospital' can be read HERE.

Speaking to the Inish Live, Mr Craig, who is from Moville, said: “A senior hospital consultant to set out to deliberately vilify and destroy my good name and character by inventing vilifying CCTV images, falsifying a Clinical Incident Report; making uncorroborated statements and unfounded allegations; and threatening to apply a 'Hazard Flag ' against my medical file on false security grounds.” 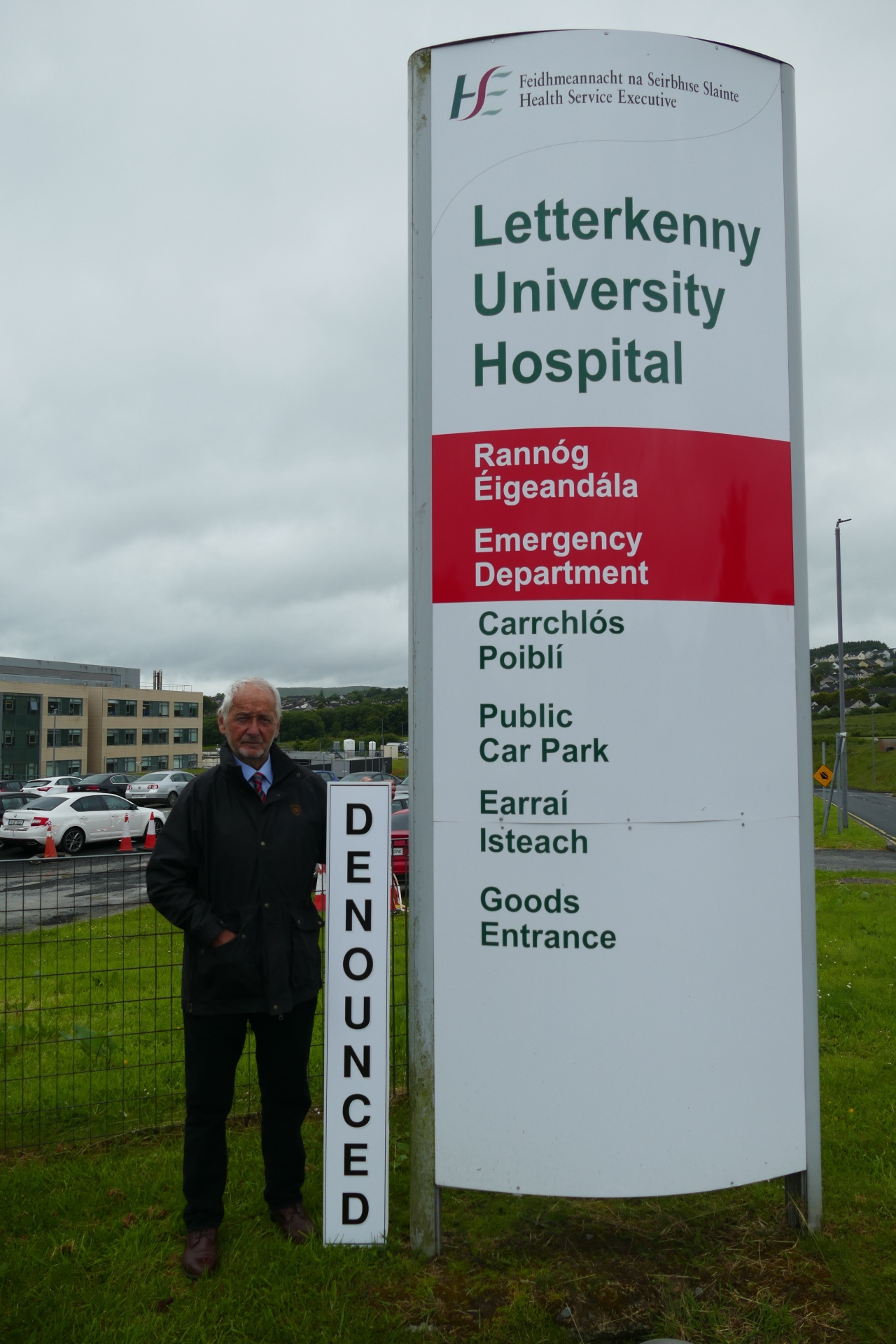 The Ombudsman not only upheld Mr Craig's complaint, he ordered Letterkenny University Hospital to apologise to him in writing.

Mr Craig received the 36-page report of the HSE review “after much persistence” following his submission of a Freedom of Information request. It was published internally by the HSE on March 31.

Mr Craig said the review report was a damning overall assessment of what was being portrayed as an official complaints process by Letterkenny University Hospital.

He added: “Essentially, the review showed there were systemic failures across the complaint processes in Letterkenny University Hospital. It stated in black and white: 'The Complaints Management System (CMS) and its reporting functionality was not utilised in the hospital'.

“For example, on page eight of the report, in the Review Assurance Levels, Letterkenny University Hospital receives the worst possible designation in relation to its complaint handling processes.

“It is actually highlighted in the red box as 'unsatisfactory' meaning: 'There are weaknesses in the system of governance, risk management and controls, which create a serious and substantial risk that the system will fail or has failed to meet its objectives. Urgent action is required to improve the adequacy and/or effectiveness of the system.'

“In addition, the Key Audit Findings in the review report highlighted how completely 'off the rails' the system was. They outlined nine serious maladministrations in relation to prescribed HSE complaints protocol.”

The official protocols being ignored by Letterkenny University Hospital included: the requirement for those involved in the complaints process to update their formal training on the 'Your Service Your Say Policy', its related guidance and materials available; and the requirement to identify the processes under which the issues involved in a complaint will be investigated, to advise the complainant accordingly and to clearly set out the review rights applying to each process. The use of the standardised letter and reporting template suite was not utilised.

Mr Craig said: “The review report also stated Letterkenny University Hospital ignored the 'requirement to clearly segregate responses for issues examined under separate processes and outline what review rights, if any, apply to each. The standardised letter and reporting suite was not utilised.'

“In addition, it highlighted: 'None of the complaint files examined set out clear recommendations with evidence of agreed recommendation action plans. The standardised letter and reporting suite was not utilised' and concluded there had been 'limited evidence of learning or sharing from complaints'.

The National Complaints Governance and Learning Team made 23 recommendations to address the “alarming defects”, Mr Craig's words, it had identified, and to bring Letterkenny University Hospital's complaint processes back into compliance with Part 9 of the Health Act 2004 and the Health Act 2004 (Complaints). 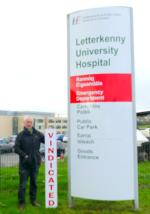 Mr Craig added: “These Acts seek to ensure the fundamental right for people to voice opinions, provide comments and complain is to the fore, with the focus on creating a positive environment and culture to encourage and learn from all feedback, especially complaints, in hospitals.

“Seven of the recommendations were designated as 'High Risk', the highest ranking in seriousness, while the remaining sixteen were considered in the medium range.

“One of the 'High Risk' recommendations which the General Manager of Letterkenny University Hospital must immediately implement is: 'By adhering to the 'Your Service Your Say' policy on managing complaints containing 'Your Service Your Say' and clinical issues, complainants will understand how their complaint is being managed and under what process and what options are open to them should they be dissatisfied with the outcome.'”

“They were replaced by an on-site, made up plan, designed to suit the hospital's own agenda,” he added.

“It would seem, any patient courageous enough to make a complaint was subjected to an agreed, collective response from senior management, who simply denied all allegations against the hospital and its staff and responded with a fabricated version of their own, designed to undermine the patient's version of events.

“This strategy was designed to turn the tables on the patient and paint them as a liar and a thug.

“While this report and its findings are welcome many questions must surely be asked: What and who allowed the Letterkenny University Hospital complaint processes deteriorate to such an abysmal state in the first instance? How come there was no sign of any periodical checking of the system to make sure the complaints process, as laid down, was properly working?

“Also, when did this complaints system start to go ' downhill' and how many patients have found themselves on the receiving end of abuse and false and unfounded allegations against their good names for simply challenging out of control staff who believed they could and did act with impunity?” he said.

The Moville man said the HSE should not under estimate the psychological trauma that is caused to a patient who is deliberately and wrongfully accused of such dreadful behaviour by vindictive senior staff.

He added: “Why has the Donegal public not been told what sanctions, if any, have been applied against the rogue members of staff who by their obscene abuse of position and trust have cast a shadow over the rest of the staff and the Hospital as a whole?

“This is a catastrophic failure by senior management who did not heed the warnings and seemingly were content to let this abuse of patients continue on the basis of presenting both hospital and staff in a good light.

“It would seem this is just another example of the lack of accountability from the perpetrators or indeed those in management whose job it was to make sure sick and vulnerable patients were treated with the care and respect they were entitled to.

“The least the HSE should do, in an effort to convince the public at large that they are serious in attempting to put things right, is to take on board the following recommendation from the Ombudsman: 'Each hospital group should provide a six monthly report to the HSE on the operation of the complaints system detailing the issues giving rise to complaints and the steps taken to resolve them and the HSE should publish an annual commentary on these six monthly reports'.

“There are serious questions that need answering by senior management of Letterkenny University Hospital who allowed this type of obscene behaviour to occur in the first instance and were unwilling to address it when it was brought to their attention. This report addresses only half of the problem,”