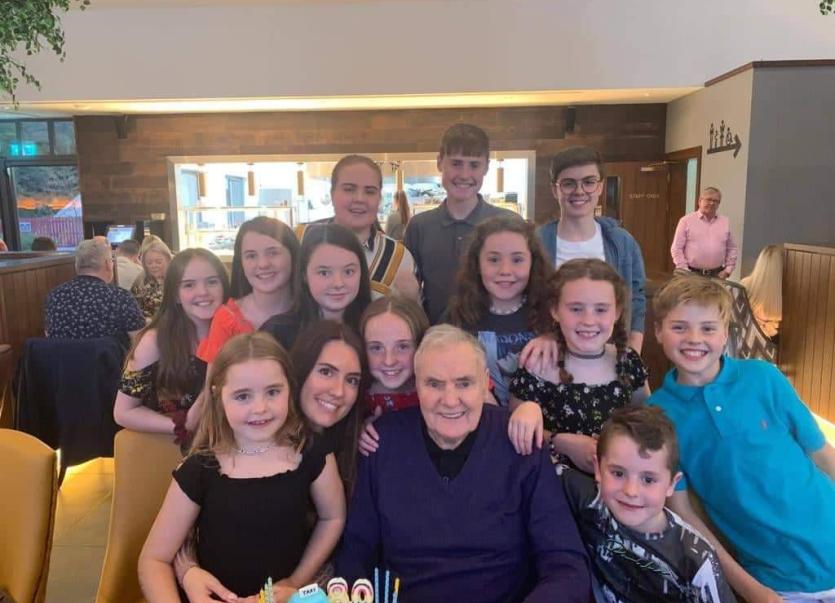 The late Tony Reddin with some of his grandchildren

A big-hearted Inishowen woman has organised a fundraiser for the Irish Cancer Society in memory of her recently deceased father.

Speaking to Donegal Live, Aine Reddin, from Drumacross just outside Muff, was well on track to meet her € 2,500 target, for the organisation, which provided a night-time nurse for her father, Tony Reddin.

Aine was inspired to set up the fundraiser following a prompt from Facebook.

She said: “My Birthday was coming up and Facebook prompted me to create a Birthday Fundraiser. I checked what organisations I could fundraise for and the Irish Cancer Society was on the list.

“I just thought, 'That is great timing.' Daddy had just passed away with cancer and had availed of Irish Cancer Society services, so it was a perfect fit.

“The Irish Cancer Society provided us with a night-time nurse for daddy, for two nights. Daddy was under palliative care and we were totally unaware of the services available. Anyone who has not gone through it or needed it, just wouldn't be aware of what services are out there or what services they might even need. The Palliative Nurse requested a night nurse for us and the Irish Cancer Society provided it.

“The Irish Cancer Society provide night-time nurses for families or people who need it for up to 10 nights and that service is provided totally from donations,” said Aine.

Tony, who was well known as 'The Voice' of Foyle Taxis, got a night-nurse for two nights.

Aine said: “We got an Irish Cancer Society night-nurse for two nights and he was just fantastic. He really, really was. He just gave us peace of mind.

“He came to the house at 11.00pm and stayed until 7.00am. He checked on Daddy and made sure his medication was OK. At this stage Daddy was sleeping a lot of the time. He had the driver in at this stage and he was waiting on.

“Daddy's heart was very strong in the end that’s why he lasted as long as he did. The first night that the nurse was there, he said ‘He’s not going anywhere tonight.' That gave us the peace of mind to go and have a sleep. And then the second night, he wasn’t quite so sure. He knew it was closer. Daddy didn’t go that night. He still lasted until the next afternoon.

“So, the Irish Cancer Society was on the list of charities and and I just thought I’ll do the fundraiser for them. They have been more than good and whatever I could raise would be greatly appreciated by them,” said Aine.

Visibly touched, Aine added: “I have just been blown away by people’s generosity I have nearly exceeded my target.

“Facebook don’t charge any fees. It covers all fees, so there are no fees if the fundraiser is for a non-profit organisation. I really like the fact that all of the money raised goes directly to the charity and I don’t have to deal with the money.

“A couple of days into the fundraiser, the Irish Cancer Society commented and thanked us for the donation. They thanked us for thinking of them. People have just been absolutely amazing, fantastic.

“Daddy (Tony) was a dispatcher for Foyle Taxis in Derry for many years. He was very well known. A lot of people had stories of Daddy always making sure they got home safely They knew to go to Daddy for their taxi. He was known as Tony 'The Voice' Reddin. My mammy, Margaret and all of my brothers and sisters would just like to thank everyone who has donated to the Irish Cancer Society fundraiser,” said Aine.