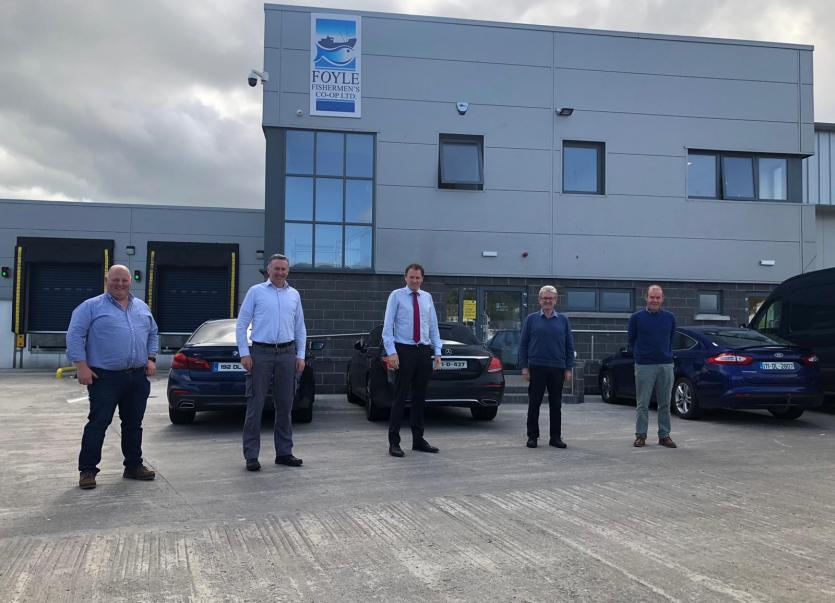 Minister for Agriculture, Food and the Marine Charlie McConalogue meeting fishermen at Greencastle

The disputed ownership of Lough Foyle has caused “very significant problems” according Charlie McConalogue, Minister for Agriculture, Food and the Marine.

In an extensive interview , Minister McConalogue described the issue as “long-running and difficult”.

Mr McConalogue said: “The disputed ownership of Lough Foyle, between the Irish and British Governments, has caused very significant problems over the years. It has meant the regulation, particularly of aquaculture, on Lough Foyle, has not been possible because there is no legal clarity or agreement in relation to responsibilities for oversight.

“There has been ongoing engagement between the Irish Government and the British Government for a number of years now to try and resolve the situation.

“A committee has been established, under the jurisdiction of the Minister for Foreign Affairs, and is meeting at Irish Government level to move the issue forward in terms of engagement with the British Government. However, there has been very limited progress in recent times.

“The situation is something that, as Minister for Agriculture, Food and the Marine, I will be pressing and trying to ensure we do all we can within our power to try and progress. Obviously, it is not something that can be done unilaterally. It is going to require agreement with the British Government,” said Mr McConalogue.

Mr McConalogue traced the disputed ownership of Lough Foyle back to the foundation of the State.

He added: “Obviously, it is also complicated at the moment  by the Brexit talks. There was a similar situation in Carlingford Lough but there has been long-standing agreement there that each state has responsibility for oversight on its own side of the midway line.

“Such an agreement has never been possible to achieve in the Foyle. The situation remains that there is no clarity or jurisdiction for either the Irish Government or the British Government to oversee aquaculture, in particular. The matter needs to be clarified in order for the appropriate, standard regulation and oversight of aquaculture to be in place.”

In relation to Brexit and the ensuing trade negotiations, Mr McConalogue highlighted a “good outcome for fishermen” as essential.

He added: “It is crucial, in terms of the ongoing Brexit trade negotiations with the British Government, we achieve a good outcome in relation to fishing.

Minister McConalogue said he had also prioritised Inishowen's Greencastle breakwater for attention during his tenure in office.

He added, the completion of the breakwater was an important project for the whole of the peninsula.

Mr McConalogue explained: “The completion of the breakwater at Greencastle is a project I have been pushing over the last number of years. Since taking up my ministerial role, I have met with the harbour committee and the fishermen and I will now do all I can to try and progress the project.”

Turning to the controversial issue of penalty points for fishermen, Mr McConalogue said Ireland had EU obligations on the matter.

He said: “If Ireland was not compliant to EU directives, if we did not carry out our obligations on the matter, we would loose out on EU funding, which would mean a significant loss of tax payers money. That is a situation that would be tolerable from a national point of view.

“As a member state of the EU, Ireland has to oversee the implementation of appropriate fishing regulations in Irish waters. We have to ensure that Irish vessels and international vessels fishing in Irish Waters comply with all EU fishing regulations.

“As interim Minister for  Agriculture, Food and the Marine, Micheál Martin, brought forward a Penalty Points Statutory Instrument, which incorporated two of the amendments put forward following consultation with the fishing sector. There were other amendments considered, however, it was found, following legal advice from the Attorney General's office, the remaining amendments would have left Ireland non compliant to EU directives.

“The Penalty Points system which has now been introduced is the best that can be achieved. It has taken on board the views   expressed by the fishing sector, while ultimately ensuring we become compliant to EU obligations,” concluded Mr McConalogue.