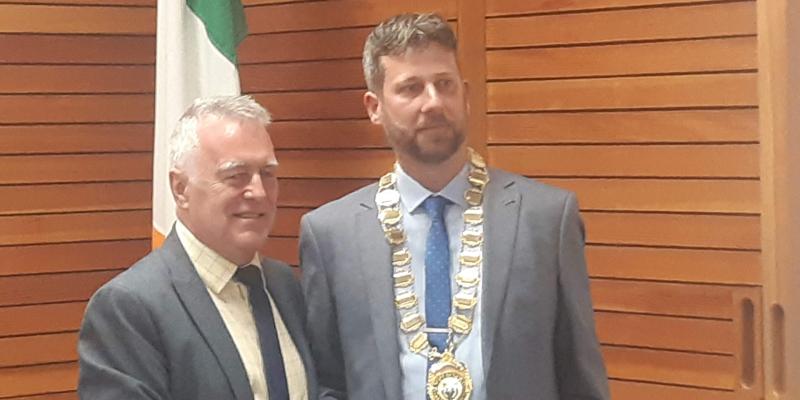 The new mayor of the Letterkenny-Milford Municipal District, Cllr Donal ‘Mandy’ Kelly, has paid an emotional tribute to his late brother, Manus Kelly, who died just weeks after taking up his seat on Donegal County Council.
The Fianna Fail councillor was elected mayor of the municipal district on Tuesday night, taking over from Fine Gael councillor Jimmy Kavanagh.
He had been co-opted onto the seat won by the brother Manus in 2019, just a month before he was killed while taking part in the Donegal International Rally as a driver. His election as mayor comes just ahead of the third anniversary of his brother's death. The father of five was killed in a crash at a stage on Fanad Head during the final day of the 2019 event.
Cllr Kelly was co-opted onto the council in September 2020 after the resignation of his father Donal senior, who had been co-opted to take the seat of his late son the previous November.
Speaking after his election as mayor, Cllr Kelly said it was surreal to be elected mayor on top of following his brother and father on to the council.
Surrounded by members of his family - including two sons of his late brother - in the council chamber at the Letterkenny Public Services Centre, he said it was a very proud and honourable day for him and his family.
The Newmills-based farmer said: “Helping get Manus elected was one of the happiest and proudest moments of my life.”
He said that after lifting his brother on his shoulders when he got elected, “little did I know that within a month later he would be back on my shoulder under surreal circumstances”.
“I know after lowering him that final time off my shoulder, no doubt that there are many times he has whispered in my ear to help me through the tough times.”

He said he wanted to dedicate the honour of becoming mayor to his father and his late brother.
There is no doubt his brother would have been an outstanding councillor, “but the man above had different plans for Manus,” he said.
Cllr Kelly said he was very proud of his father when he took over his late brother’s seat and had shown “the drive, the passion and the nerve to step in to honour your son”. “You have shown what a strong man you are.”
He also paid tribute to the strength of his mother Jacqueline and thanked her for her support.
Cllr Kelly thanked his wife Aislinn, son Donal, Aislinn’s family and his brothers and sisters for their support.
His party colleague Cllr Ciaran Brogan was elected as deputy mayor, taking over from Sinn Féin councillor Gerry McMonagle.
Cllr Kelly said the construction of houses would be one of his priorities during his year as mayor.
He said mica is the biggest crisis to hit the county and he would continue to push and lobby to ensure 100% redress is delivered.
Lobbying for his local areas including Newmills, Churchill and Gartan, will also be a priority.
As a farmer, he said he would continue to engage with agriculture minister Charlie McConalogue on behalf of farmers.
In Letterkenny, he said there are a lot of positive things happening and he will work hard to ensure as much is delivered as possible.