Residents have objected to an extension at a house in Letterkenny which is to be used for student accommodation, saying they are 'deeply concerned' about the possible impact 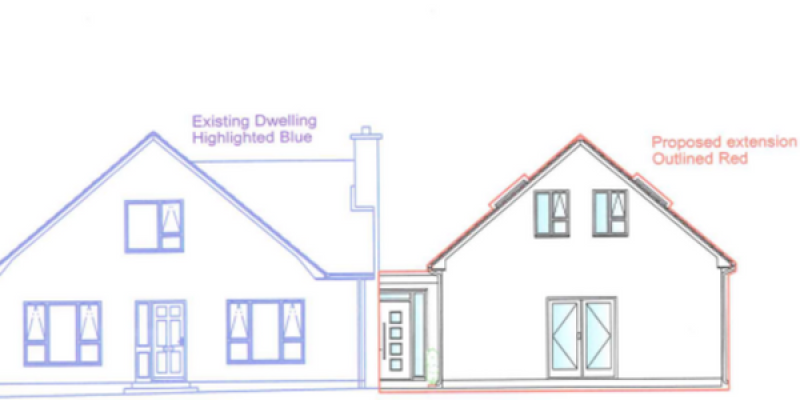 The existing development and proposed extension as shown in plans.

Some residents in Letterkenny have lodged an objection to An Bord Pleanála after Donegal County Council granted planning permission for the development of an extension to a dwelling for use as student accommodation.

Residents in the Ballyraine area have appealed against the development, arguing that an extension of such a scale would give rise to antisocial behaviour.

Following initial objections to plans for an extension to consist of 10 ensuite bedrooms, there was what was described as a ‘significant reduction in the scale and density’ of the proposed development.

Six months after undergoing rotationplasty surgery, Nikki Bradley - who hopes to have a full prosthetic fitted by early October - took part in her first race event since when doing 7km at the Donegal Half Marathon on Sunday.

However, on August 4 notice was given that residents have appealed the decision to An Bord Pleanála.

Donegal County Council had laid down ten conditions, including that revised plans were submitted to the Planning Authority for written agreement, that the proper be used and sub-left solely for the purposes of student accommodation and that the developer provide covered and secure parking for five bicycles.

Further, the development was to pay a contribution of €1,520.

David, Anne and Jean Stevenson of Ballyraine are listed as one of the of the appellants in the case.

“We remain deeply concerned about the potential antisocial behaviour which could arise as this large extension could create a meeting place for large gatherings,” they say in documents lodged with An Bord Pleanála.

“This large extension has the potential to be used for other purposes which are also no in keeping with this residential area.”

Issues over what they say is an ‘unsafe’ narrow alleyway and car parking have also been highlighted.

Objectors have also queried what they claim is an incorrect address on the application. The proposed development is listed as being in Oakland Park and the objectors argue that it is in Gortlee.

“We want to know yet again why we have not been given an explanation about the address stated on the plans and site notices,” they write.

They contest that the size of the development ‘is totally inappropriate for a residential area’.

“The entire house would become more than twice its present size,” they write. “If the proposed new extension was to go ahead, there would be accommodation for 16 people in total.

“A building of this size could encourage large gatherings.”

Another appellant, Anne O’Kane and others (a total of five householders in Ashlawn) have also appealed against the County Council’s decision to give the go-ahead.

They raise questions over an ‘invalid address’, ‘public safety and traffic management issues’ and ‘residential amenity’.

“Families occupy the majority of the surrounding area and their needs should therefore remain the priority for this well-established residential area,” their appeal says.

An Bord Pleanála say the case is due to be decided by December 6, 2022.