Six months after undergoing rotationplasty surgery, Nikki Bradley - who hopes to have a full prosthetic fitted by early October - took part in her first race event since when doing 7km at the Donegal Half Marathon on Sunday. 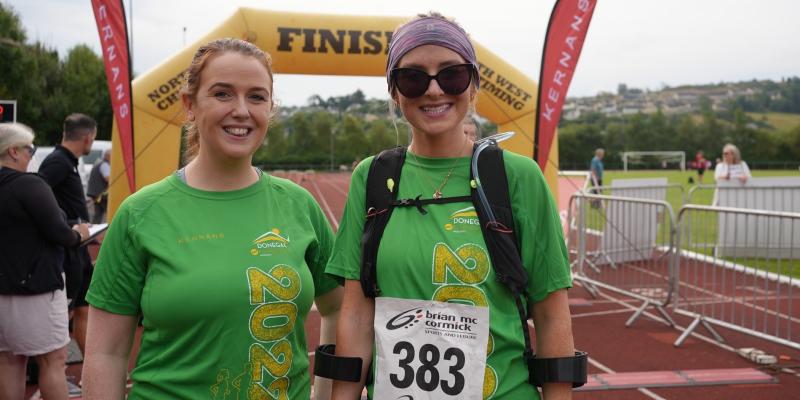 Nikki Bradley (right) with Michelle Rainey after crossing the line at the Donegal Half Marathon.

Sunday’s Donegal Half Marathon marked a significant milestone in her journey.

Last week, Nikki had her leg cast and is hoping to have a full prosthetic fitted by early October.

“It feels great, I did about 7km,” Nikki told Donegal Live at the finish line at the Aura Leisure Complex.

“It was so good. The atmosphere was lovely. I have to say a big shout out to all the stewards and volunteers who gave up their time. To be so supportive is amazing.”

Last August, Nikki announced that she would have rotationplasty surgery.

In February, she underwent a nine-hour procedure at The Royal Orthopaedic Hospital in Birmingham.

The middle part of her right leg was removed with the lower leg reattached at the thigh - but rotated 180 degrees. Her ankle will act as her knee once a prosthetic is fitted.

The 36-year-old, who lives in Milford, took part in Sunday’s race in the company of her cousin, Michelle Rainey.

“It was absolutely brilliant to cross the line,” Nikki sad. “I’m definitely ready to sit down for the rest of the day.”

Nikki has completed some staggering feats, including abseiling off Fanad Lighthouse, climbing the Sólheimajökull glacier in Iceland and completing the 4 Peak Challenge inside 32 hours.

Nikki, who was diagnosed with Ewing’s Sarcoma, a rare bone cancer, when she was 16 years old has been working closely with the Letterkenny-based No Barriers in recent months.

“It’s all good,” she said. “I’m at the first stage of getting the prosthetic done. I should have the full prosthetic by early October so it’s a very exciting time. I’ve been waiting on it for a long time now.”