Local restauranteur says of of a foul odour emanating from the wastewater treatment plant: “At times it is so bad that, if you had a weak stomach, you wouldn’t eat your dinner at the time.” 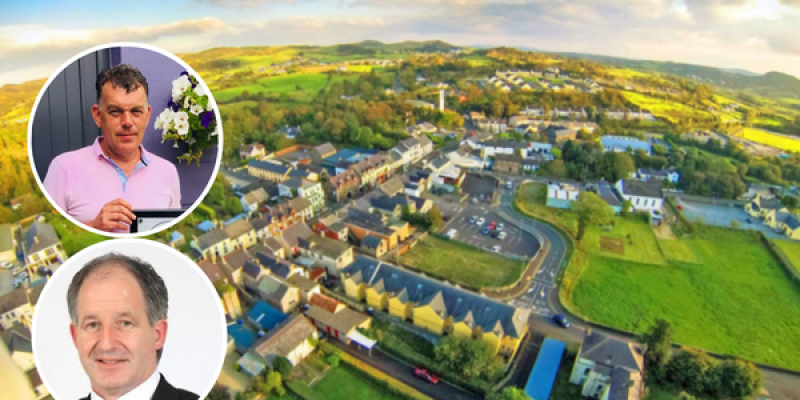 Milford has been blighted by a foul odour from the wastewater treatment plant and (inset) Michael McBride and Councillor Liam Blaney.

Residents and business owners in Milford are being blighted by a persistent foul odour hanging over the town.

The issue is stemming from the Milford wastewater treatment plant located close to the centre of the town at the rear of the Public Services Centre.

An ongoing issue for several years now, the problem became noticeably worse during this summer.

“You would think that the whole sewer was opened up at times,” Michael McBride, the proprietor of The Traveller’s Inn, told Donegal Live.

“It is desperate when that smell pops up. If a farmer was doing this, he would be told to stop.

“At times it is so bad that, if you had a weak stomach, you wouldn’t eat your dinner at the time.”

“This has been going on a good while,” Mr McBride said.

“It was really bad this year. We had outdoor music this year on Friday and Saturday nights and there were times when it felt like someone was spreading slurry in the beer garden. It was just such a raw, rough stench.

“You’d notice it getting worse after 9 o’clock at night, it would just come whiffing up.

“Last summer, we had outdoor dining only and that was difficult enough for us, but this smell just added to that and it was definitely worse when it was warmer.”

There are 19 people employed at the popular The Traveller’s Inn, a bar and restaurant on the Main Street.

“You’d notice customers just sitting in now, the smell is just terrible,” he says. “People have nearly begun to accept that that is how it is, but it has become worse and worse recently.

“You have had people here who’ve had to bring their washing in and do the wash again.”

Donegal County Council has confirmed that its Environment Section has received ‘ongoing complaints’ from residents and also from staff working at the Public Services Centre.

Irish Water says that it is working alongside Donegal County Council to investigate the matter.

“We would like to acknowledge the co-operation and patience of the local community in Milford while we continue to investigate the causes of the odour,” an Irish Water spokesperson told Donegal Live.

“Our local operations team is in the process of making process and operational changes including sludge management improvements, which should assist in the control of odour at this location.”

Irish Water says that it hopes to secure planning permission for the Ramelton, Milford and Rathmullan Sewerage Scheme.

“This project involves the construction of a number of elements including a new wastewater treatment plant at Tirroddy that will serve a population equivalent of approximately 5,500.”

While these proposed works - which it is hoped will be completed by 2026 - will include the decommissioning of what Irish Water admits is the current ‘underperforming’ plant in Milford, Fianna Fáil County Councillor Liam Blaney insists that the people of Milford cannot be forced to wait for four years.

“You couldn’t ask them to wait another day for this to be sorted out,” he said.

“It is disgusting. This is ongoing over years, but it has been terrible for the last number of months.

“The plant’s capacity is not fit for what’s coming into it. Even to just drive through the town at times, it’s disgusting.”