The Island of Inis Bó Finne has really captivated the hearts and minds of locals and tourists alike in recent months.

The island is a Wild Atlantic Way Discovery Point just 3 kilometre off the Donegal coast. It has a significant bird population and is a sanctuary for the corncrake, barnacle geese, choughs, Arctic terns and peregrine falcons.

Very few people live on the island all year but people often return to fish or holiday. The views from the island are spectacular and it has a breathtaking beach facing Tory Island.

News of the public convenience was welcomed at a recent meeting of Glenties Municipal District.

Sinn Féin Councillor John Sheamais Ó Fearraigh praised the work on the facilities on the island and said that the official opening would take place in the near future.

"A lot of work has been done on the island recently," he said.

Donegal County Council’s (DCC) Water and Environment Section recently overseen the development of a new public convenience facility on the island. The site was agreed with the Very Rev Seán O'Gallchóir, to whom DCC is very grateful.

The project was only possible following Appropriate Assessment and approval by the National Parks and Wildlife Service owing to the sites EU Designation for its biodiversity and importance ecologically. The facility was designed to a very high standard by Mr. Sean O'Donnell of DCC’s Regeneration & Development Team. There is a unisex and fully accessible cubicles catering for users of all abilities. Construction was by McMenamin Brothers Contractorswho completed the facility to a very high standard. 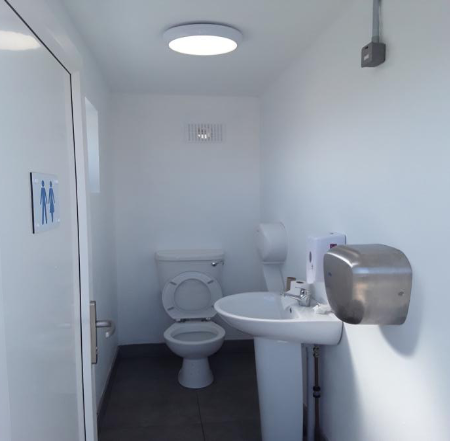 Management of this public convenience will be overseen by the recently formed Island Committee.