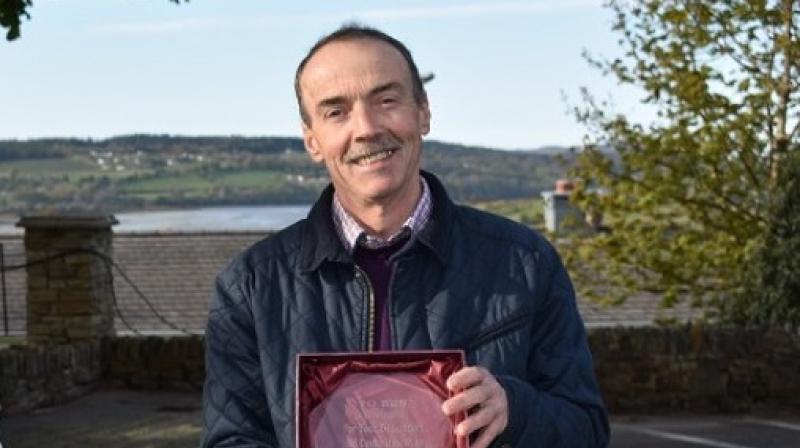 The late Ben McFadden, pictured with his community award which he received last year

Friday night’s edition of RTÉ’s Nationwide programme ended with a message of sympathy to the family and friends of Creeslough man, Ben McFadden who died this week.

Ben featured on tonight’s edition of the popular programme which was filmed recently in the Donegal village.

In May of last year, Ben, who was chairman of the Creeslough Community Association, was honoured by members of the local community when they presented him with a special award for all that he has done for the village.

And his enthusiasm and love for Creeslough was so very evident when he spoke with immense pride on Friday night’s programme.

The show highlighted how after struggling since the recession, Creeslough has bounced back in recent years with new businesses and an active community playing their part in its success.

At one time, presenter Anne Cassin noted, Creeslough was a village that motorists just drove through as a way to somewhere else.

“But now the village has a centre of gravity thanks to a number of initiatives that arrived at just the right time.” she said.

Reporter Niall Martin visited the village and interviewed a number of local people, including Ben who  recalled the difficult years when Creeslough struggled to survive.

“It was just like a ‘passing through’ town,” Ben said.

“Nobody stopped. There was no reason to stop.”

Others to feature on the programme were Mairead McGinley, Lorcan Roarty of the Wild Atlantic Camp, Australia-based Creeslough brothers Charles and Martin Sweeney, Bernadette McFadden and Ann Laight and all spoke of how the community had rallied together to kick life back into the locality.

Ben McFadden pictured with his wife Bernadette, son Peadar and daughter Majella after he was presented with a special award last May

The final words were left to Ben McFadden who paid tribute to all those who were part of the community association and spoke of his excitement for the future of Creeslough.

“At the minute there are at least three or four different people talking about getting businesses in Creeslough,” he said.

“There’s a chain reaction. Give us three or four years and Creeslough will be even twice as good.”

The feature on Creeslough ended with Anne Cassin telling viewers of how news had reached the Nationwide team that Ben McFadden had passed away on Thursday.

“We’d like to extend our sympathy and our condolences to his family and friends in Creeslough,” she said.