Millions to one odds involved as rare Orange lobster discovered in Donegal Bay! 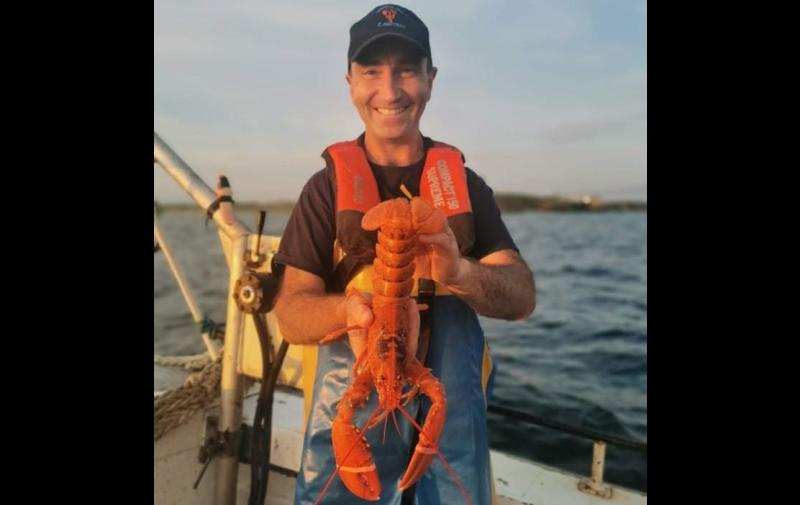 Experts may debate on how many million to one odds are involved, but for Bundoran lobster fisherman, Sean Carty, it was the equivalent of the ‘lotto lobster’ win, when he discovered one of the rarest creatures in the crustacean kingdom - an orange lobster.
Sean was genuinely taken aback last Friday, when he came across this rarity of nature, the first in his 40 years of fishing off the Donegal coast.
After bringing it into the west end pier to get a photo and show it to one of his sons, Daithí, he returned the lobster to its natural habitat.
“I did check out what the odds were of such a rare lobster, but whatever it is, I might try my luck with the lotto next,” he told the paper.
And while we must take Dr Google with a pinch of salt, when it claims that there is a 30 million to one chance, we can take its rarity as given. Other sites also put it at 10 million to one.
Sarah Clarke, Technical and Scientific Officer with the Marine Institute said that she would not speculate as to a bookie’s odds, but was happy to confirm that such a lobster was “really rare”.
When informed of the release, Ms Clarke said that they were happy for fishers or the public to contact them for their expertise or advice on such matters, but in this instance, the lobster being returned was “very probably taken the right course of action”.
“We collect data from all around the coast, but we don’t always get it from exact positions. We would work closely with fishermen on the ground and would often go out with them to carry out some analysis,” she added.

Sarah also pointed out that there was no correlation between the orange lobster having offspring of the same colour, in the future and its pigmentation was the culmiation of both dietary and environmental factors.

Ireland 'not prepared' for more frequent extreme weather and heatwaves

As to why he returned the lobster to the wilds of the north west Atlantic coast, Sean said that it was only right that a rare lobster be left back where she came from.
“Someone told me at the pier to give her to one of the aquariums but that just didn't sit right with me. I would be very happy if anyone else were to take her aboard, they have the same regard for her rarity and do the same thing. It was a female as well.”
“It was certainly the first one that I had seen. It was a proper sized female lobster and while I once came across a light blue one, this was my first time experiencing this, although a friend told me that he had come across a few in his time.”
Sean said that it probably weighed about three quarters of a kilogram (.75kg).


As to the current situation with lobsters he admitted that he would regularly return upwards of 75% of catches because they did meet the specified criteria.
“It is not as good as it was years ago. You would have to put out many more pots now than you would have had to in the past, just to get the same catch, if at all.”
And if you are interested in a lobster that isn’t orange or the very occasional bit of cod or mackerel, Sean can be contacted by messenger or phone or you might even catch him on the pier although some mornings that can be a 4am start.
ADVERTISEMENT - CONTINUE READING BELOW