Only 2% of Ireland's seas are currently protected 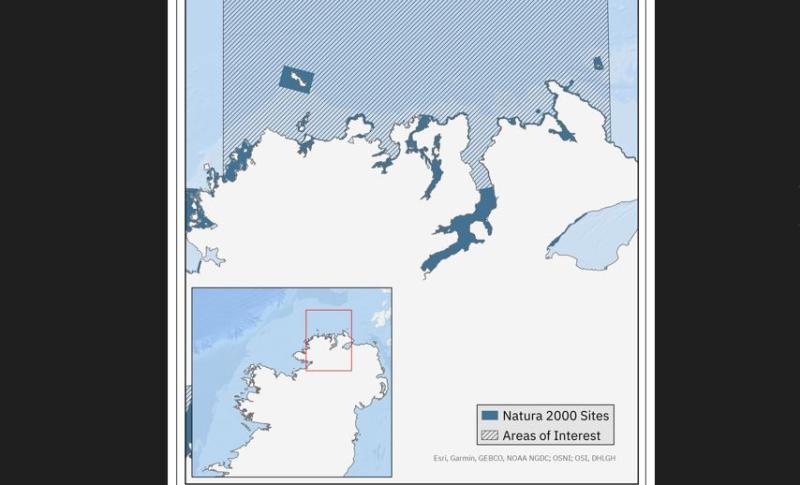 A map of the proposed 'Area of Interest'

The report points out that only 2% of Ireland's seas are currently protected.

Fair Seas is urging the Government to meet its target of increasing this to at least 30% by 2030, informed by the best scientific data and early and continuous stakeholder engagement. Fair Seas has identified 16 ‘Areas of Interest’ for Marine Protected Area designation in Irish waters.

You can read the report here: chrome-extension://gphandlahdpffmccakmbngmbjnjiiahp/https://fairseas.ie/wp-content/uploads/2022/07/FS_full_report_pages.pdf#page=26

The ‘North Coast Area of Interest’ covers 3,744km² and is rich in biodiversity. Basking sharks are seen in large numbers, especially around Malin Head, where between 60 to 75 individuals have been seen in a single sighting. Bottlenose dolphins and harbour porpoises are found along the north coast year-round, with particularly high numbers at the mouth of Lough Swilly.

Marine Institute surveys found this area to have one of the highest average catches per haul of tope shark. The tope shark is listed as Critically Endangered by the International Union for Conservation of Nature (IUCN).

Threat
The main threat to this species is overexploitation from commercial fishing as there is still allowable catch even though evidence shows it is declining. Thornback skates are found across this area and Lough Swilly is a refuge site for the critically endangered flapper skate, the largest skate in the world, reaching up to 2.85 metres in length.

The cliffs from Horn Head to Fanad Head are home to important colonies of seabirds of high conservation concern such as kittiwake, razorbill and puffin. Lough Swilly provides sanctuary for breeding terns, black guillemots and black-headed gulls. Tory Island and Inishtrahull are rich in seabird diversity. Bloody Foreland is of major importance to migrating birds with more than 31,000 seabirds and 24 species recorded over a four-year period.

Fishing communities
MPAs allow species and habitats to recover and thrive while benefiting fishing communities and coastal economies. The ocean is the largest carbon store on Earth, so MPAs have huge potential to fight climate change.

As noted by Professor Mark Costello in the foreword of ‘Revitalising Our Seas’: “If properly planned, MPAs can lead to more stable and sustainable coastal fisheries, with added benefits of increased tourism and public enjoyment of marine life.

"There is no evidence of any MPA anywhere in the world reducing fishery catch. There are many examples of MPAs restoring fished populations and these restored stocks consequently repopulating adjacent areas where they contribute to fisheries.”