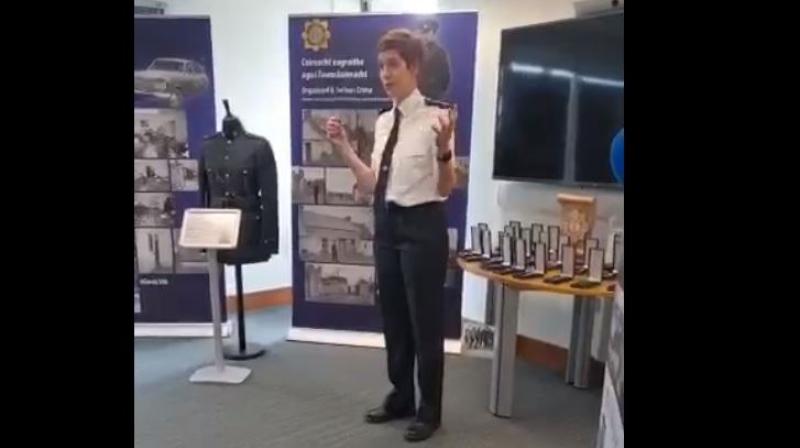 Superintendent Goretti Sheridan at the presentation of centenary medals and certificates

A number of retired garda members from the Buncrana district were presented with special centenary medals and certificates by Superintendent Goretti Sheridan in recognition and appreciation of their service to the state and their commitment to An Garda Síochána.

This was a follow on from the open day at Buncrana Garda Station recently.

Saturday marked the anniversary of the transfer of policing duties from British rule 100 years ago this month.

About 450 gardai retraced the steps the first Garda commissioner Micheal Staines took, along with Ireland’s newly formed Civil Guard, as they marched into Dublin Castle, the headquarter of British rule, for the handover of duties on August 17, 1922.

Gallery: DylanFest on the Lough returns to Moville

The parade began at the Gresham Hotel in O’Connell Street, the location for the meeting in February 1922 of the committee formed by Michael Collins to establish a new police service for the State, before making its way to Dublin Castle via Dame Street.

It included members of the Garda band, the ceremonial unit, officers corps and other units.

The Civic Guard, formed by Michael Collins and the Irish Government in 1922, was later renamed An Garda Siochana.

The ceremony also included a performance by the Garda band of a specially commissioned piece of work by Odhran O Casaide.

The Commissioner described the transfer of policing duties from British rule as a “pivotal” moment.

He told the crowd gathered the 14,000 gardai and 3,000 garda staff are all working to “uphold the ideals of those who founded us 100 years ago”.

Justice Minister Helen McEntee described the parade through the gates as a “hugely symbolic statement”.