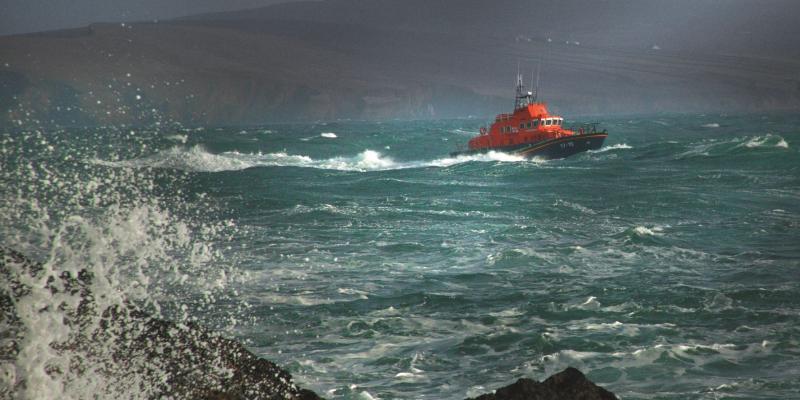 Ballyglass RNLI made the journey across Donegal Bay to assist the trawer. PHOTO: Irish Coast Guard on Facebook

Four fishermen have been rescued from near the coast at Malin Beg after their trawler lost power.

Ballyglass RNLI came to aid of the fishermen in Donegal Bay in the early hours of Wednesday morning after their 55ft trawler got into difficult.

The lifeboat made the journey north to assist the fishermen as Arranmore RNLI’s all-weather lifeboat is currently in dry docks for routine maintenance.

A number of volunteers involved in the rescue had also recently played their part in the challenging 22-hour rescue of a kayaker stranded in a cave.

A spokesperson for the RNLI said: "The volunteer crew left their beds when they were requested to launch their all-weather lifeboat by Malin Head Coast Guard at 2.20am and go to the aid of a drifting trawler four miles west of Malin Beg in Donegal.

Both emergencies dealt with successfully

"The lifeboat launched under Coxswain James Mangan and set out immediately across Donegal Bay just after 2.30am to assist the crew of the large vessel that had lost power and was drifting.

"Conditions on the overnight passage were less than favourable with southerly Force 5-6 winds, a 2-3m sea swell and poor to fair visibility.

"Once on scene at 5.25am the lifeboat crew assessed the situation and found that the fishermen were safe and well. A decision was then made to establish a secure tow and bring the vessel to the nearest safe port at Killybegs where they secured the trawler at 11.40am.

"The crew then began the preparations for the return journey to Ballyglass."

Eric Geraghty and Ciaran Deane, two of the volunteer crew onboard the lifeboat were also out on the 22-hour callout just three days ago to rescue a kayaker who got trapped in a cave at Downpatrick Head.

Man ‘in good spirits’ after rescue from Mayo sea cave

Speaking after the trawler was safely berthed, Pádraig Sheerin, Ballyglass RNLI Lifeboat Operations Manager, commended the crew for their dedication.

He said: "We would like to wish the fishermen well.

"Despite the very early hours of this morning when the pagers went off, there was a great turn out once again from our volunteers with plenty of assistance and team work to launch the lifeboat as promptly as possible.

"It is thanks to the commitment, dedication and hard work of the volunteer crew, along with the top-class training and equipment provided by the RNLI, and the funds raised by all those who donate to the lifeboats, that allow us to continue saving lives at sea.

"A sincere and heartfelt thank you to one and all."