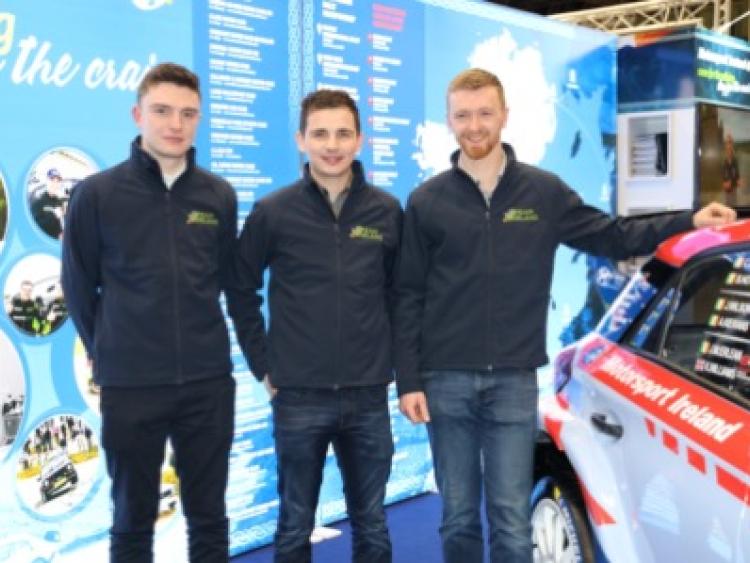 Callum Devine (centre) is going from strength to strength

The winner of the Donegal Harvest Rally is one of three young Irish rally drivers who is being given the chance to break through into the big time in 2020 after it was announced he will drive Hyundai i20 R5 cars at domestic and international events.

Callum Devine, from Co. Derry, will have the opportunity to compete in one of the most hotly-contested rally classes (R5) this season.

James Wilson and Josh McErlean were also unveiled next to a Hyundai i20 R5 at the Autosport International motorsport show at the NEC in Birmingham.

Devine is the current Motorsport Ireland International Driver of the Year and in 2017 won the Billy Coleman Award for being the Young Rally Driver of the Year. He and co-driver Brian Hoy will compete in all rounds of the European Rally Championship, with the first six rounds counting for the ERC Junior U28 title, and the last two rounds for the Overall ERC Title.

They secured their first podium victory in Ireland in October as they took the honours in the Donegal Harvest Rally staged around Redcastle.

Callum Devine said: “I have experienced driving this car in a round of the ERC last year and I have to say that I can’t wait to get behind the wheel again. Having a full campaign in the Hyundai R5 will allow myself and Brian to target the Junior ERC for podium finishes and hopefully even championship honours as well.”

Wilson, from Co Armagh, the 2018 Billy Coleman Award Winner, and co-driver Arthur Kierans will compete in the National Irish Forestry Championship and selected rounds of the Irish Tarmac Championship, providing him with invaluable experience on mixed surfaces which will be required as he progresses his career onto the international stage.

McErlean, from Kilrea, Co Derry, who last month was named the Billy Coleman Award Winner for 2019, will compete in all rounds of the British Rally Championship which has been the launch pad for so many drivers now competing on the ERC and WRC stage. Josh impressed on his debut R5 drives last year on Wales Rally GB and at the Monza Rally Show and will be aiming to take that form into 2020. He will be supported in his endeavours by co-driver, Keaton Williams.

Josh McErlean said: “I have to thank everyone involved. I never dreamed when I started rallying that I would win the Billy Coleman award let alone be involved in a programme that will enable me to compete for a full campaign in a top spec R5 like the Hyundai. For a young driver like myself this is an opportunity I intend to grasp with both hands and prove to those supporting myself and Keaton that their confidence in us is justified.”

Leo Hassett, CEO Motorsport Ireland, said: “It is a great testament to the work of the academy that we are in a position to announce this today. These young men and their co-drivers have the opportunity to compete at the highest level in the sport both at home and internationally.

“This unique opportunity is only possible because of the incredible support we have received from Sport Ireland, the Team Ireland Foundation, which is generously supported by, amongst others, John Coyne and John Campion. Of course, Hyundai Motorsport Customer Racing and their work with the academy also needs to be acknowledged. As important is the proven ability of the Billy Coleman Award process to identify talent and reward its participants with this type of experience that will be invaluable in their future careers as drivers representing Ireland on the international stage.”

Andrew Johns, Senior Sales Associate Hyundai Motorsport Customer Racing , said: “We are excited by the prospect of these talented young drivers showcasing their skills in the Hyundai i20 R5, and delighted that the car can play a role in the development of these drivers’ careers. All three have already showed they are able to compete in the incredibly competitive R5 class, and I have no doubt that with a full season for each of them their skill behind the wheel will see podiums, and maybe even championships won this year.”

Sean McHugh, coordinator of the MI Rally Academy said: “We are delighted to see these three young Irish drivers moving forward in developing their careers. Having the winners of the Billy Coleman Award for each of the last three years progress to top flight cars contesting major championships at home and abroad demonstrates the significant impact of the Rally Academy initiative”.

“The MI Rally Academy, now entering its second year, is designed to develop, support and promote young Irish rally drivers as they climb the ladder to success at the sport’s highest level, representing the best of Irish talent on the world stage.”