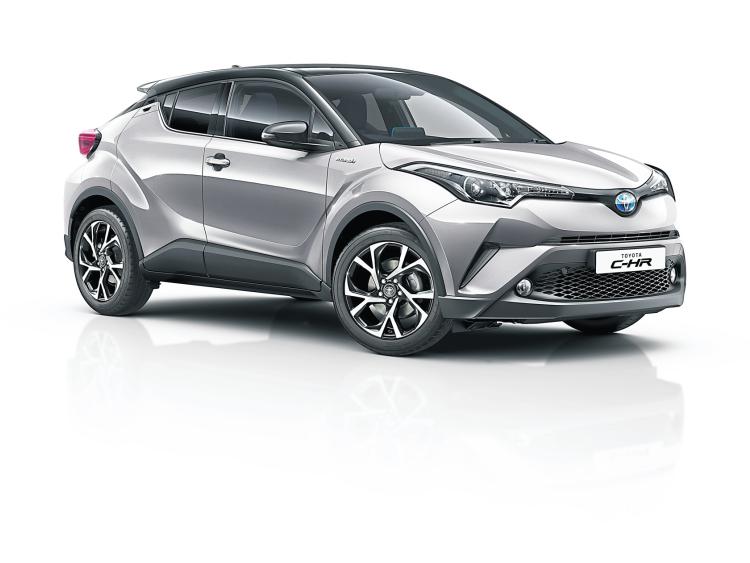 The new C-HR launched prior to Christmas.

Toyota’s known qualities - reliable, best resale value in Ireland, high levels of specification , competitive pricing , wide range of models, pioneers of hybrid motoring, consumer led offers etc …. are well documented in the various press & media outlets throughout the course of the year.
It is however at the end of each significant registration period when official statistics are released that we get a true picture of our performance for the year.
Kelly's Toyota were delighted as SIMI published official statistics for 2017 to hear that they have retained our No.1 position in Donegal as the best selling passenger car brand for 2016. This has been further enhanced by Toyota having also secured the No1 position nationally.
In a year that saw the Irish motoring market experience growth of 17.5% Toyota enjoyed 18.5 % year on year growth, becoming the best-selling car brand in Ireland with sales of 15,530 passenger vehicles and an overall market share of 10.6%.

On a local note, there were 3,525 vehicles registered in Donegal of which 534 were Toyota’s occupying an impressive market share of 15.15%.
We are not surprised that four of the Top 10 models sold in Donegal are Toyota branded. They are the Toyota Yaris (128 cars), Toyota Auris (111 cars), Toyota Rav 4 (110 cars) and the world’s best selling Toyota Corolla with 109 cars.

A true reflection off the ability off the Toyota range to suit all needs from a small hatchback to the family sized saloon to the ever popular SUV.
Our hybrid market increased by a significant 28% in Donegal in 2016. The move to hybrid vehicles is increasing as customers recognise the advantages and superior driving experience that they offer. Luckily Toyota are world leaders in this market and now have five of their mainstream models available in a hybrid option including the yaris, auris, prius, rav 4 and the new C-HR launched prior to Christmas.
Toyota Ireland cites its brand and Dealer Network strength in addition to competitive pricing, high levels of specification as well as consumer led offers as the key to its success.
Commenting on the news, Steve Tormey, Chief Executive, Toyota Ireland said:
“2016 was a great year for Toyota and we are proud to have once again regained the status of being the best-selling car brand in Ireland. Particularly pleasing was the continuing strong demand we experienced right across our range coupled with significantly increased consumer movement into hybrid vehicles. We believe this trend will continue with our newest model, the C-HR as well as other new model introductions later this year.
As we get ready for another busy 2017, we extend a welcome to all to visit our dealerships in Mountcharles & Letterkenny, our sales staff will be delighted to discuss your individual requirements and hopefully we will have product which will suit your needs. You can visit us at Port Road, Letterkenny or Drumbeigh Mountcharles, alternatively visit our website www.kellystoyota.com . Toyota Built for a Better World.