"The minister has shown no leadership" - Paul Diver, IHF 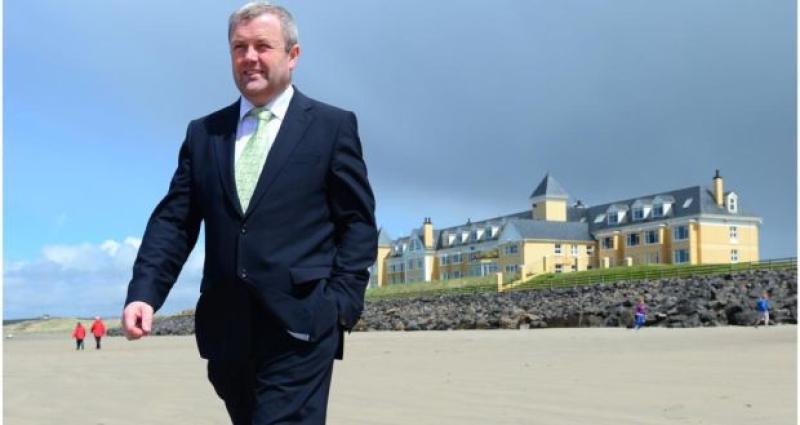 A prominent Donegal hotelier has made an unprecedented attack on the outgoing government’s failure to support the hospitality sector in Donegal and nationwide.
Pointing the finger directly at Minister for Tourism, Shane Ross, who he accused of “showing no leadership” at all, Paul Diver of the Sandhouse Hotel in Rossnowlagh claimed appeals from the industry for support from the outgoing government had “fallen on deaf ears”.
Diver’s scathing criticism will carry more weight as he is the chairman of the Donegal branch of the Irish Hotel Federation.
Diver, who came to national attention when he fronted a successful bid to secure the future of the renowned Rossnowlagh Hotel and protect and increase employment there, was unequivocal in his condemnation of Fine Gael’s failure to help the industry in Donegal:
“Numerous delegations met with the department on the question of the increased VAT rate and cost of rates and insurance and all to no avail. It has simply fallen on deaf ears. There are locations in Donegal which would simply be devoid of employment were it not for the tourism industry.”
He added: “Without a doubt the tourism industry is the biggest employer in the county incorporating not only the larger hotels but also the various SMEs, craft shops, guest houses and the various ancillary services. It is a hugely important sector here for myriad reasons, not least offering employment to hundreds of people seasonally and on a 12 month basis.
“The minister should realise that Donegal is not Dublin - many of our hotels are open for seven to eight months, yet, pay fixed costs for the full twelve months, we are lacking in infrastructure and our access routes are limited.”
Mr Diver stressed that he was not anti-Fine Gael, and was keen to point out that previous Fine Gael administrations had served the sector very well, but this had changed drastically under Shane Ross’s baton: “Previous Fine Gael-led governments, led by former Minister for Tourism Enda Kenny worked closely with both Sean McEniff and Dinny McGinley in the promotion of the county.

Higher costs
“Years ago under a previous Government the “good value concept” of Ireland as a tourism destination was mooted and was achieved. Regrettably this has been eroded as a result of much higher costs and lower margins.
“At a time of uncertainty with Brexit on the horizon we now need a strong proactive government who are committed to the hospitality and sustainable jobs in rural areas,” he added.
Mr Diver went on to state that it was crucial that those seeking election would look seriously at assisting the sector and it was his view that as a sector they must push all political parties and independents to outline their plans for ensuring that the industry is properly supported and livelihoods are protected.