The show that is packing in the crowds around the country . . . not to be missed! 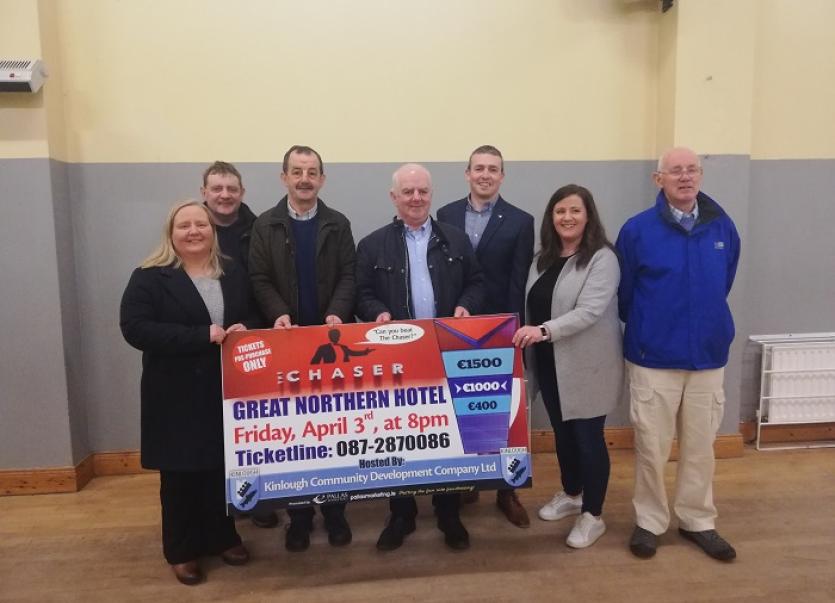 It's gripping the nation. It's one of the most exciting shows around and it's coming to Donegal to help fundraise for a new community centre in Kinlough. And you could win a tidy little sum of cash! What more do you want?

For on Friday April 3rd Kinlough Community Development Company brings the hugely popular “The Chaser” to The Great Northern Hotel in Bundoran.

This show has attracted large audiences all over Ireland and is fast becoming the most popular source of fund-raising for groups, schools and clubs.

The €200 and €400 are milestones – contestant must choose after each question if they wish to bank the amount won or take another question.

Contestants have two lifelines “Ask the audience” and “Take one” which will reduce the number of answers by one. Each lifeline can be used once.

These works include a new re-drained, re-aligned pitch with new fencing, goals, ball-stops and dugouts, a new extension to the community centre with 2 new meeting rooms including a economic hub with hotdesks, a new fully equipped kitchen and new tarmacked car park.

The launch night for the show was held in the Community Centre on Wed March 4th with a large attendance including Tom Shanahan from Pallas Marketing (show providers).

We spoke to Pat Gallagher, Chairman of the Fundraising Committee about the show at the launch night who advised as follows: “We have been in contact with several other groups who ran “The Chaser” around the country with great success. We are all looking forward to a great night on Friday April 3rd in The Great Northern Hotel Bundoran as the show is excellent, its really hi-tech and offers a superb night’s entertainment for everyone.

"The show is timed to start at 8pm and we would encourage people to come early to ensure a seat” said Pat. “We would also like to say a particular word of thanks to our exhibitors Spar Kinlough, BMG Hardware & DIY, McGurran Oil, Henrys Restaurant, Kieran Walsh Construction, October House Design, Curran Contracts, PK Motors and W8 Holiday Village and also to all the other local businesses who have taken out advertising at the show”, he continued.

There is still some large screen digital advertising space available for the show, please contact kinloughchaser@gmail.com or 087 2870086 for further information.

Tickets for “The Chaser” are available from any member of the fundraising committee and must be purchased in advance of the night.

Tickets are €20 or a special family ticket for €50. Numbers will be limited – so dont miss out!

Anyone wishing to attend should contact a committee member, call 087 2870086 or message kinloughchaser@gmail.com. It promises to be a great fun family event and one not to be missed!