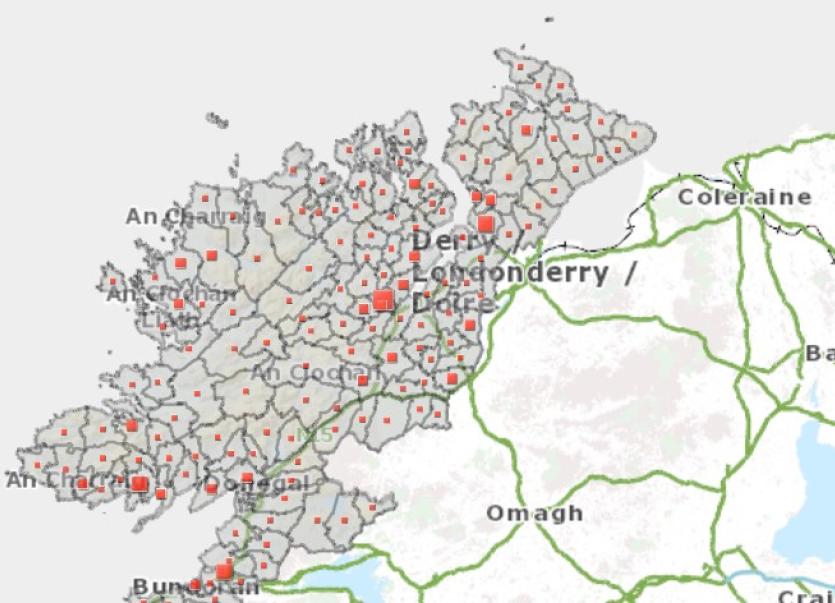 Killybegs, Ballyshannon, Letterkenny and Fahan have been identified as areas where some of the largest number of confirmed Covid-19 cases in the county over the past three months.
A total of ten cases were recorded in the Electoral Division of Annagry.
As of Tuesday evening at 8pm Leterkenny University Hospital (LUH) reported that it had no confirmed Covid-19 cases but recorded three suspected with Covid-19 symptoms and were awaiting test results.
Sligo (SUH), which covers part of south Donegal had no confirmed cases but did have 10 suspected cases.
The total number of confirmed cases in the county has also been reduced over the past week, as small numbers continue to be denotified.
That number currently stands at 464.
The current transmission breakdown is 2% from travel abroad, 31% from community transmission and a much larger 61% from contact with a confirmed case.
A new map has also been launched which shows the number of Covid-19 confirmed cases in people's own local areas.
You can search by your address, Eircode or just zone in on the map.
Dr Ronan Glynn, deputy chief medical officer, Department of Health, said: "A new Covid-19 dashboard provides up-to-date information on the key indicators of Covid-19 in the community, including the number of daily cases, deaths, number of people in hospital and ICU and a daily update on testing figures.”
The electoral division (ED) breakdowns give an indication of where in the county the highest number of cases occurred.
Letterkenny Rural is said to have had 45 cases, with Letterkenny urban standing at 9, as of June 12.
Large numbers were also reported in Fahan (33) and Buncrana Urban (19) and Buncrana Rural (12).
In the east of the county Clonleigh south reported 12 cases.In the west and south of the county the highest number of confirmed cases included Killybegs with 24 and Ballyshannon Urban with 22 confirmed cases.
Other ED areas other than Annagry reported single digit cases.
Areas that had 5 or less cases are not indicated for the purposes of privacy to the petients convcerned.
Meanwhile, the number of people in receipt of a Pandemic Unemployment Payment on 23rd June in Donegal stood at 16,800.
The previous week's figure stood at 18,100 - a weekly reduction of 1,300.
At its height there were a total of 22,700 people in the county receiving the Pandemic Unemployment payment.