Friendships made as young golf players take to the fairways 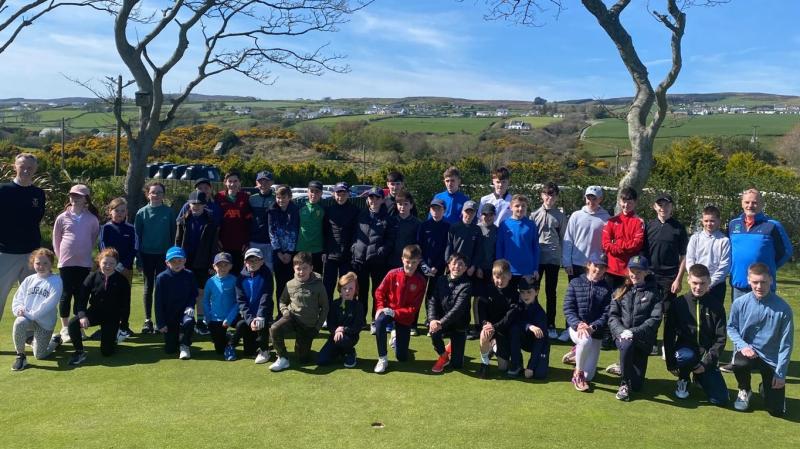 The young golfers from Letterkenny and Greecastle, pictured with their coaches

The rise in the numbers of young golfers taking up the sport was apparent last week when a team of Letterkenny Golf Club’s junior golfers travelled to play a challenge match against Greencastle juniors.

Juniors on both teams ranged from 6 years to 16 years, a mix of boys and girls.

The course was in superb order, the greens running true and a stiff breeze tested  the shot making skills of all.

Four Donegal players named in gaa.ie Team of the Week

Friendships were made and in a most sporting match Greencastle Juniors made home advantage count to win the match on a 5 1/2 to 4 1/2 result.

Greencastle’s Junior Convenor Tony Gillespie, Gemma Mc Clenaghan and their Junior team are thanked for the hosting of the match  and the splendid welcome given to all Letterkenny Juniors and their parents.

Afterwards kind words were advised to the Juniors from Greencastle Lady Captain Ann Vekins and President Paula Mc Galloway was also in attendance. A return match at Letterkenny in June is eagerly awaited.

Meanwhile Letterkenny Girls Junior Captain Cliodhna Patton hosted a Junior Scramble at the club as a fundraiser for the Relay For Life cancer charity. Eight teams of Juniors took part in a scramble format. All the Juniors games were sharpened up from the Greencastle match the day before. The winners on the day were the team of Jonathon Russell, Charlie Carr, Dylan Gildea, Laura Murphy.

Cliodhna collected €505 for Relay For Life. Congrats and thanks to all who contributed for this most worthy charity.