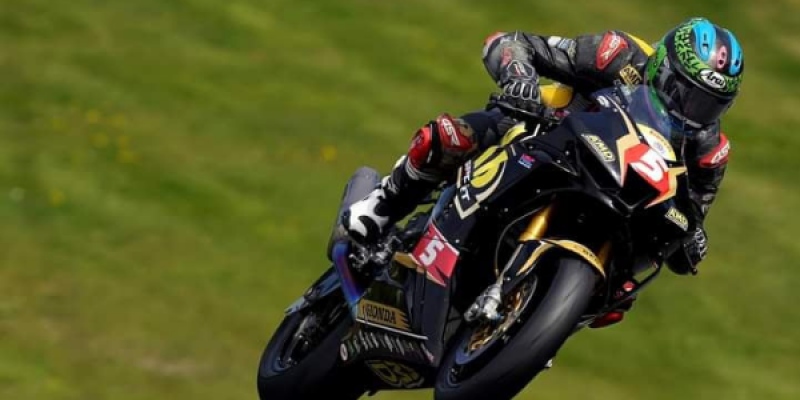 Richard Kerr and AMD Motorsport took their first victory together at the weekend with the Kilmacrennan rider taking the win in the second No Limits Pirelli Super Series 1000 race at Donington Park.

Looking to make use of the track time ahead of the third round of the Pirelli National Superstock Championship, which takes place at the same venue in less than two week’s time, Kerr did just that on the CBR1000RR Honda Fireblade.

Fifth for Callum Morris in Scotland

Victory in Saturday’s National Endurance race, where each rider put in a 30 minute stint before handing over to one of their team-mates, got the weekend off to a perfect start.

On Sunday, Kerr opened his account with a close second to fellow Honda rider Brayden Elliott in the first Pirelli Super Series 1000 race.

Elliott, currently second overall in the National Superstock Championship, got the verdict from Kerr by just 0.318 seconds with Joe Talbot, Tom Oliver and Ashley Beech following them across the line in close formation.

Kerr turned the tables later in the day though with a 1.8s winning margin over Talbot with Elliott a further tenth of a second adrift in third.

The trio did battle again in the final 14-lap race of the weekend and, although Elliott came out on top once more, Kerr ensured it was a more than successful visit to the 1.97-mile National Circuit with another second place.

It’s been a really enjoyable weekend and great to get my first win with the team,” Kerr said.

“I’ll need to reduce my lap times a bit for the next Superstock round but the track time was invaluable and it was all about laps and miles under my belt. I learned a lot about both myself and the bike though in terms of where our strong and weak areas are and that will stand us in good stead going forward.

“I had some really good battles with Brayden and Joe and it was great to get the better of them, especially Brayden whose started the season so well.

“I also need to say a big thanks to Billy and Bob who were a great support in my first Endurance race. It was important to stay nice and calm, stay disciplined and focus on being fast and smooth. It was also good for my fitness so we’re all glad we made the visit to Donington and a big thanks, as always, to Fraser and Mary Dykes and the whole AMD Motorsport team.”

Kerr will return to Donington Park on May 20-22 for round three of the Pirelli National Superstock Championship.