The Donegal Under-15s came out on top in Galway on Saturday. 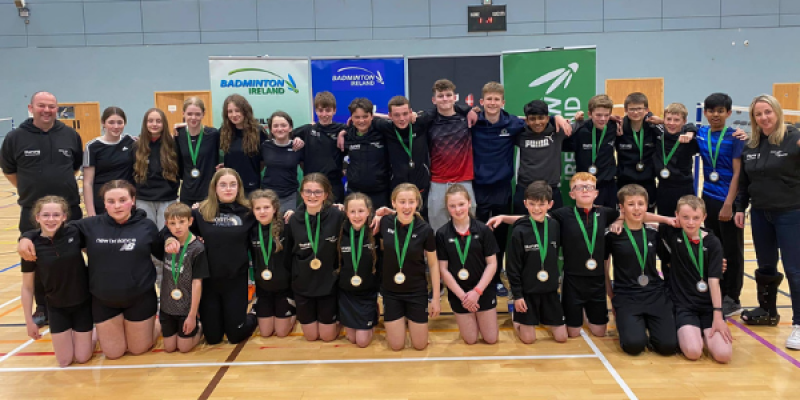 The Donegal squads with coaches Drew Chambers and Miriam Magee.

Donegal Under-15 badminton team won their sectional at the 2022 Juvenile Inter County finals on Saturday.

The tournament was hosted at NUIG Kingfisher in Galway.

Donegal’s under-15s came out on top with an 8-1 win over Clare and a 5-4 triumph against Dublin.

Their joust with Dublin was deadlocked at 4-4 and it took the courage of Rhys McAuley and Holly Northey to take them over the line.

McAuley and Northey came from 20-16 down in their last match on the court to take a 22-20 win and secure the gold medals.

McAteer sees off Blackmore to win at the Curragh

The competition sees the best county teams from each province compete against each other for the All-Ireland title.

Donegal under-13s left with the silver medals, beating Kerry 6-3 before losing to Dublin, while the Donegal under-17s went down to narrow 5-4 defeats at the hands of Dublin and Waterford.

They were accompanied by coaches Drew Chambers, Wesley Knox and Miriam Magee.