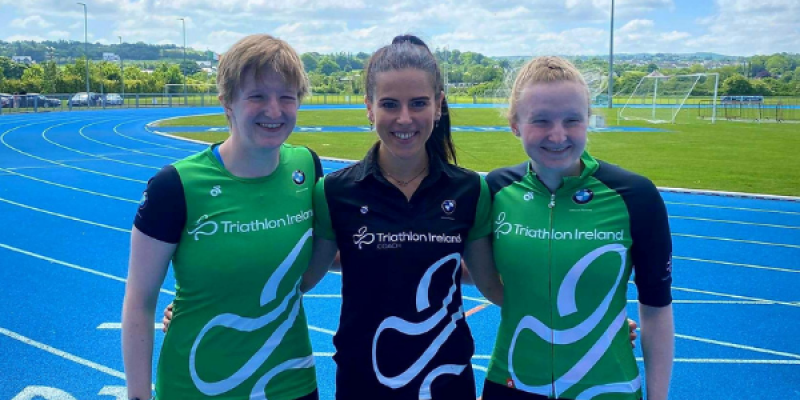 Natasha Kelly with Chloe and Judith MacCombe at the Finn Valley Athletic Campus.

Northern Ireland para triathletes Chloe and Judith MacCombe spent this weekend in Donegal for a training camp as their preparation for the 2022 Commonwealth Games continues.

The MacCombe sisters from Claudy in County Derry are coached by Glencolmcille woman Natasha Kelly.

A weekend camp at the Finn Valley Athletic Campus was the latest stop.

Kelly, recently appointed as the North West Development Officer and Para Triathlon Project Coach with Triathlon Ireland, is excited for the summer.

Burke and her Letterkenny AC colleague Noeleen Scanlan finished inside the top 10 with over 20,000 participants toeing the line

“I do believe that there is a podium there for them,” Kelly, a Finn Valley AC athlete, told Donegal Live.

“It’s how we approach the next few weeks and how things progress and grow.

“The idea of the camp is that we can gel them, try out new things, make all the mistakes we’re going to make now, sort out the nitty-gritty stuff. We’ll do loads of trial and error and a big thing is creating a team environment for us. We’ll train hard while getting to know each other better.

“We’re so lucky at Finn Valley to have everything on-site for a camp like this; we’re really thankful to everyone for the use of the facility.”

Guides Catherine Sands and Anne Paul were also present for a hectic weekend.

Next up for the MacCombe sisters is the World Para Triathlon Cup in A Coruña, Spain, on June 19. The National Championships take place on July 9 before they go to the Commonwealth Games in late July. The assistance of the Sport Institute of Northern Ireland (SINI) in Jordanstown and the Commonwealth committee with support in areas of nutrition, psychology and lifestyle has been instrumental of late.

“My main goal is to get Chloe and Judith to the start line as the best possible versions of themselves they can be. I need them on the start line fit and healthy, in a good headspace.

“We want to create a really good, positive environment around them to have them feeling confident in themselves.

“It’s pretty new, but it’s been a very good experience for me. It’s been really good learning.

This week, Kelly goes to Wels, Austria for the Europe Triathlon Junior Cup and will be assistant coach to lead coach, the Letterkenny native Gary Crossan.

“It’s a fantastic opportunity for me,” Kelly said.

“I’ll see a real diverse mix of everything. I’m still a young coach and I don’t know yet where my strand is. It’s possibly in high performance, but I always say I love the juvenile end of it too.”