‘Donegal is the cream of the crop’ - Declan Gallagher 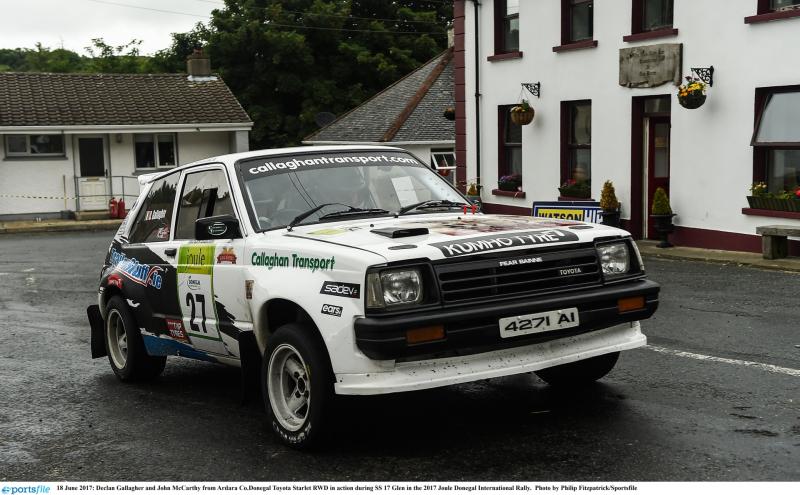 Declan Gallagher in action during the Glen stage of the Donegal International Rally. Photo: Sportsfile

Declan Gallagher still winces when he recalls the small margins.

It is eight years now since the Ardara man was just 0.2 seconds behind Gary McPhilips at the head of the leaderboard in the 2014 Donegal International Rally.

His pursuit ended on special sage 5 and a year later he was 21 seconds in front when he crashed out on Corradooey.

“It’s a long road and a lot of corners to go around,” Gallagher says now ahead of his latest voyage around Donegal’s tar this weekend.

“It’s sore on man and machine, but hopefully we can get to the finish line anyway.”

‘The Milkman’, with Derek Heena as co-driver, will take to the start line in the famous Toyota Starlet.

Gallagher was always destined for a motorsport career.

His early memories of seeing his uncles, Joe and Dermot McHugh, competing, lit a fuse. The flames were fanned on watching the likes of Bertie Fisher, Austin McHale and Kenny McKinstry.

Donegal is always the one that endures.

“It was there from an early age,” Gallagher said.

“Donegal is the big one. You can go to a lot of rallies and the atmosphere and everything is just different here. You only have to look at the line-up. It’s something else, the crowd that it draws to the county. You wouldn’t get it anywhere else.

“Donegal has the buzz about it. It’s different to any other rally. Everybody talks about Donegal and the stages we have here really draws the crowds. It’s a great rally and there’s great excitement about the whole thing.

“The stages are so challenging. We’ll try and get the car ready as best we can and hope for the best after that.

“Everyone wants to do well at home. Donegal is the cream of the crop. Anyone who can get their name on Donegal, that’s the one everyone wants. We’re looking forward to it – hopefully it’ll go ok for us.”

Gallagher won the overall national championship in 2014 and remains one of the popular figures on the entry list.

The field is littered with top talents, but the Fear Bainne will hope to thrill this weekend.

He said: “The likes of Ryan Loughran, Gary Kieran, Daniel McKenna and Kevin Eyes, they’re all going to be really battling. Sea time isn’t on my side this year. We did Carlow and we have a bit of work to do. We’ll give it a rattle and go as hard as we can.”