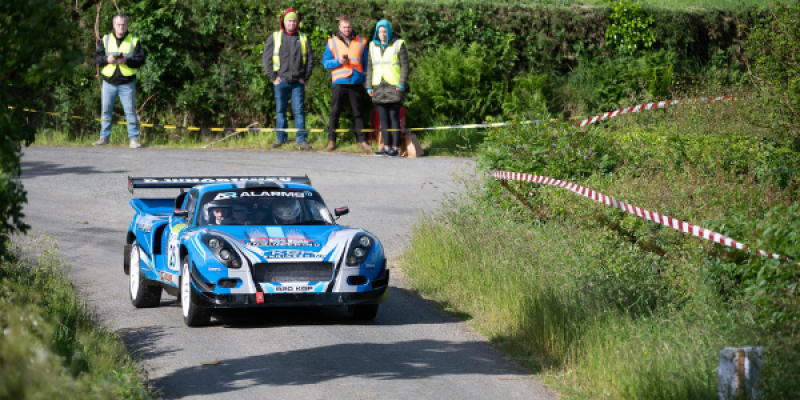 Kevin Gallagher on a charge in the Donegal Rally. Photo: Clive Wasson

The Rathmullan man had a superb drive in the Darrian T90 GTR and had one minute and 0.5 seconds of an advantage on James Stafford, also in a Darrian.

Gallagher had run well in Donegal in 2017 and 2019, but the ultra-competitive modified crown eluded him - until now.

“I’m delighted to get it,” he told Donegal Live.

“It’s been a long time in coming. It’s the only rally we’re building up for. I don’t do a whole lot of rallying with work.

“I’m over the moon, delighted.”

Gallagher had just 1.7 seconds to spare on Friday evening and extended that to 31.4 seconds by the close of action on Saturday.

Partnered by Ryan Moore, Gallagher had to drive over the last three stages without a clutch in the Darrian.

He said: “It was a long, tough three days of rallying. We had a good push on Saturday to get enough of a cushion.

“We had a problem with the clutch and couldn’t get it sorted. We had to make do without a clutch for the last three stages. You just have to drive on past everyone and not stop. We got a push start off the line so we managed alright.

“In the stages was fine, it was getting away, you’re just watching yourself that you don’t spin anywhere

“The weekend was very good, bar the clutch problems on Saturday. We’re happy out.

“We had a good run. We’re lucky to get here, but we just watched ourselves.”

He said: “The car was good all weekend so we’re happy out. It was a wee bit tough, but it’s lovely to get it. I’m delighted.”