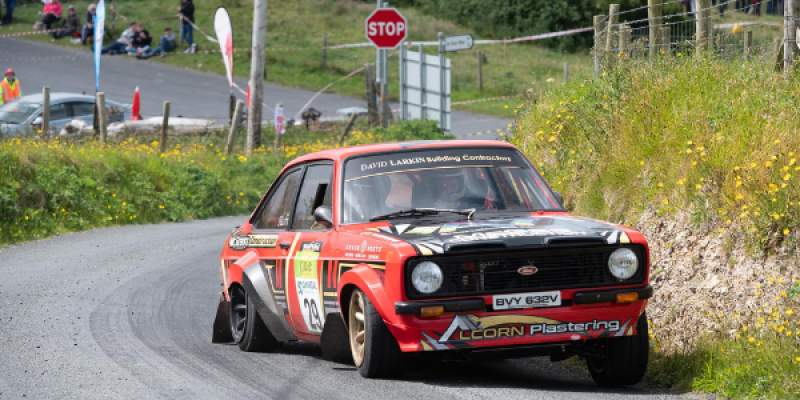 Mark Alcorn and James McNulty in action in the Escort. Photo: Clive Wasson

Mark Alcorn delivered a reminder of his talents behind the wheel over the weekend.

Alcorn finished 14th overall at the Donegal International Rally and fifth in the modified category.

As Alcorn flew over his home stage, the Gartan loops, his mind wandered.

HIs mother, Margaret Noel Alcorn, passed away in February 2022.

The red Escort was the third quickest car overall on SS15, Gartan and he was the sharpest of the modified men on both runs of the stage.

“I was thinking on Mammy the whole way around it,” Alcorn told Donegal Live.

“She’d have been delighted to see us come around the (Lough) Akibbon with the quick times.”

Alcorn, with Ballybofey’s James McNulty as co-driver, was 20th overall on Saturday night and was really on the pace on Sunday.

Stage mileage was cut short, though. High Glen ran just once while the first run of Atlantic Drive was cancelled after an accident that spelled the end of Matt Edwards’ involvement.

Alcorn said: “It was a good day. It’s just a pity we didn’t get enough stages, but it was good.

We weren’t really looking at the leaderboard at all. The boys were far out in front.  We just kept a wee push on.

“I’m rusty. I don’t be out too often so it takes me a day or two to get into it. I got my confidence back a wee bit with the Cooper tyres. It was just like I was back in the Corolla again, so that helped me.”

It was clear to see Alcorn’s comfort in the cockpit was on the up as the weekend moved on.

He said: “I am delighted. It’s hard to get into Donegal when you haven’t had a couple before it.

“We were focussed, the car was ready, James was ready and we did everything right. We knew that if we stayed in it that the pace would start rising with us.”