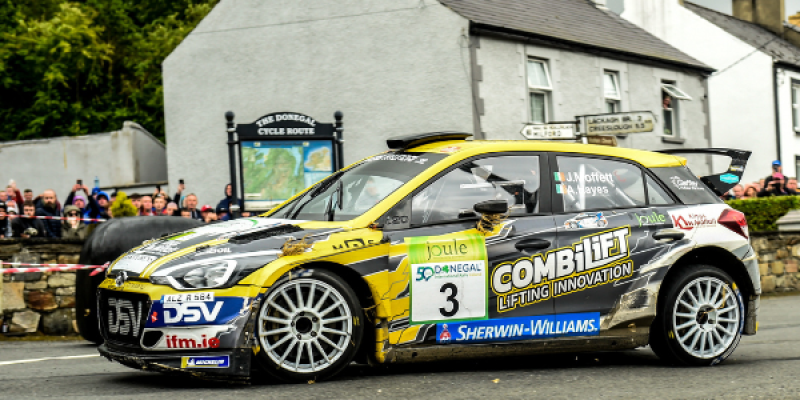 Josh Moffett and Andy Hayes on their way to winning the Donegal International Rally. Photo: Sportsfile

They deal in the smallest of margins.

Rallying is all about the inches, not the miles. Every point of a second is a prisoner.

Donegal has become a Mecca for rallying fans. Last weekend, tens of thousands turned out for the 50th anniversary Donegal International Rally.

A special event on Sunday, the third and final day of the 2022 event, saw some past winners of the rally, drive through the Gartan and Atlantic Drive stages in a demonstration run.

They were led by Ari Vatanen, who won Donegal in 1978 having also competed three years previously. The Finnish rally driver, the world champion in 1981, was in a Bastos BMW M3.

“Donegal means a lot to me,” Vatanen observed.

“Early part of my career and whatever happened I still remember it as if it was yesterday. That’s forty-odd years ago. It’s unbelievable. In this place, Donegal, you can feel how people are genuinely and sincerely passionate about rallying. I’m welcomed with open arms. I am happy to be a part of the Donegal team.” 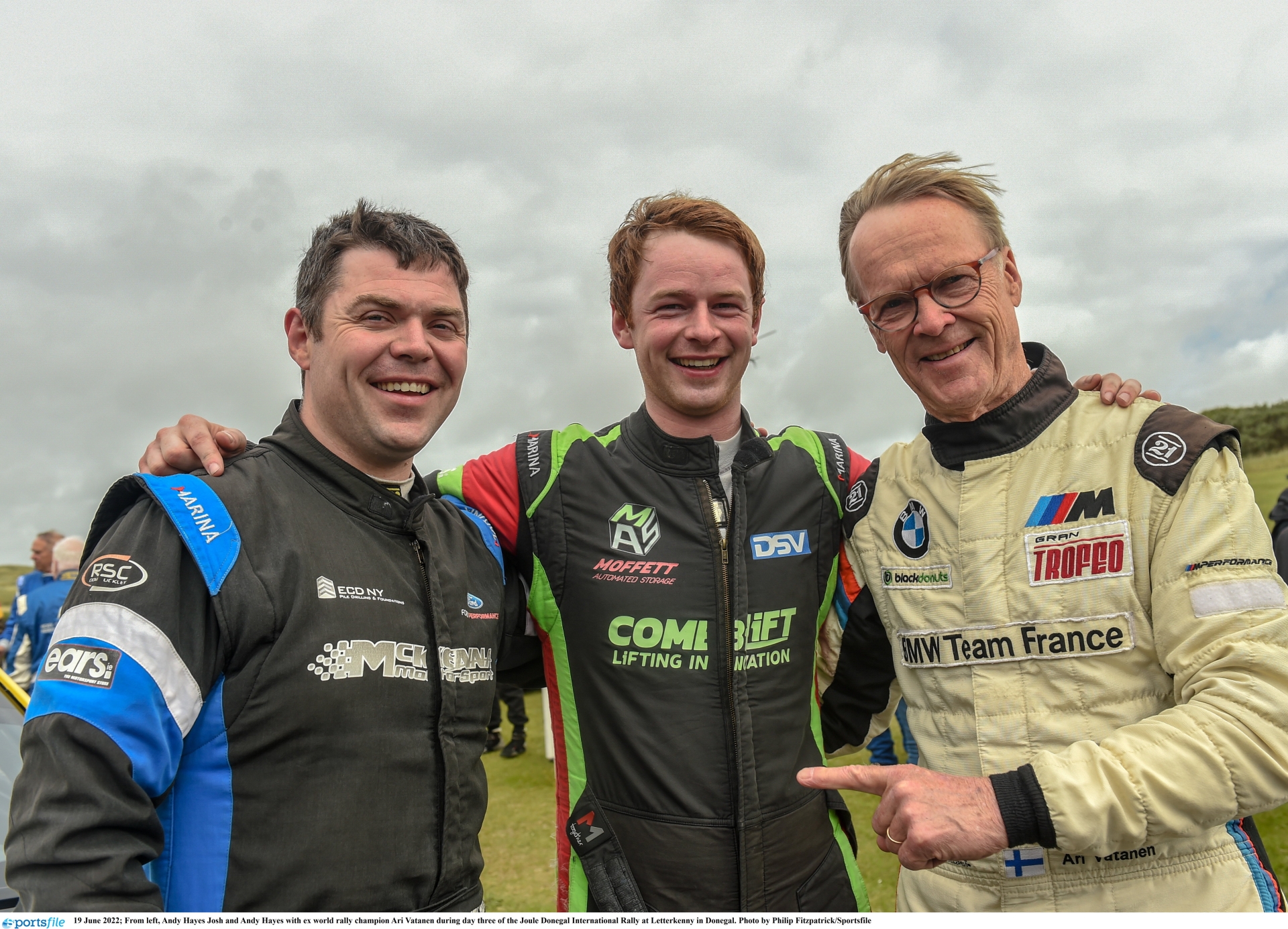 When it comes to rallying, Donegal can really go with the old ‘Up Here It’s Different’ tourism branding.

“It’s got that prestige. It wasn’t until we got to the finish line that the emotion flooded in.”

When Moffett brought the Hyunda i20 R5 off the Atlantic Drive stage just outside Downings he was embraced, first by his girlfriend Aoibhin Kiely, and next by his brother Sam.

Nothing is expected in Donegal apart from the unexpected.

Callum Devine was seemingly cruising on Saturday evening when he was 17.7 seconds ahead of Matt Edwards.

Devine set the pace from the first stage on Friday, Dooish. After Knockalla on Saturday evening, he was still the man in the box seat.

After clipping a round bale entering a chican,e Devine irreparably damaged the radiator of the the VW Polo GTI R5 on Sunday’s first stage, Gartan.

Suddenly, Devine was out and Matt Edwards, the defending and three-time British Rally champion, assumed the lead. 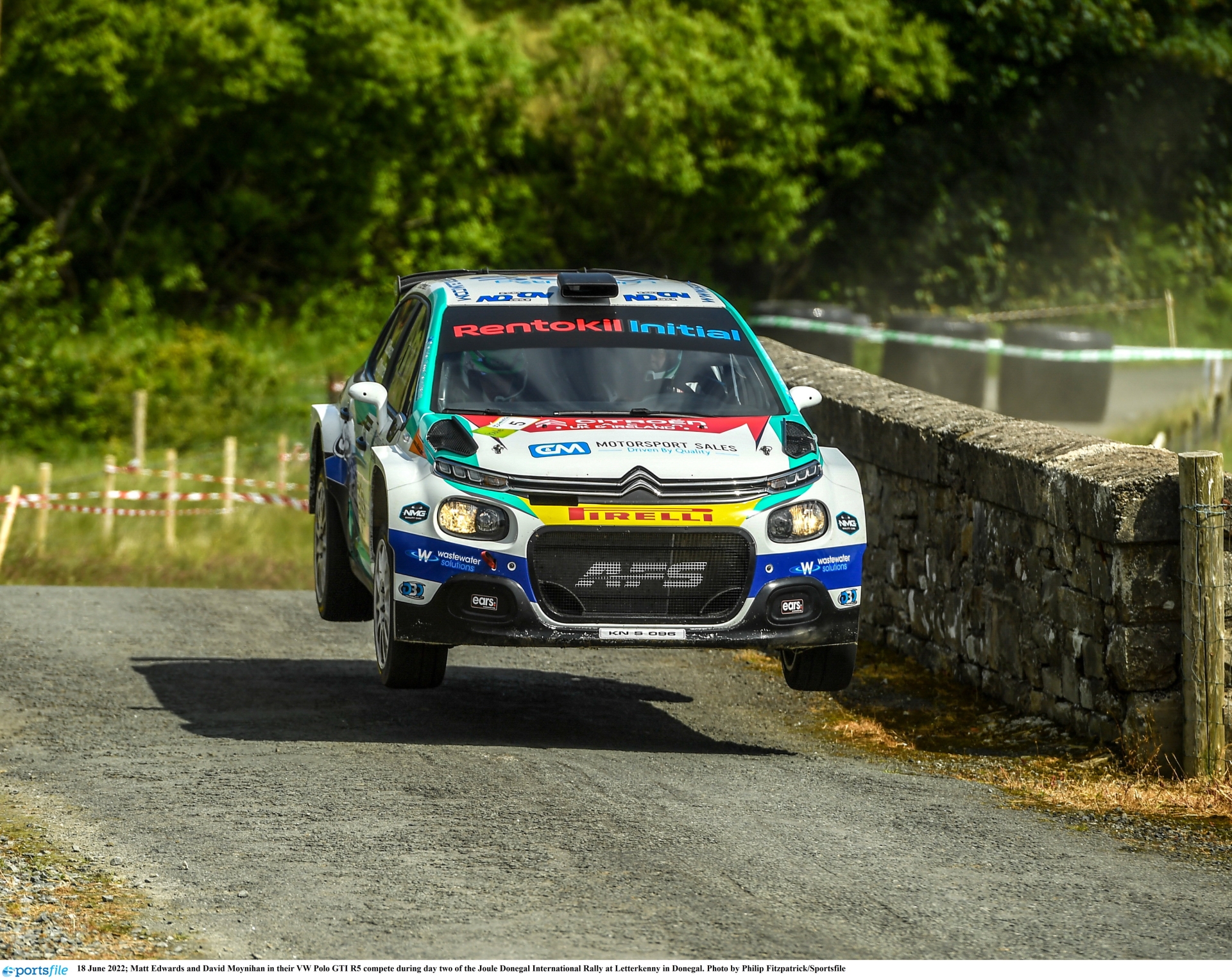 On the next stage, Atlantic Drive, a fifth-gear corner ended Edwards’ weekend and left he and co-driver David Moynihan in Letterkenny University Hospital for a couple of nights.

The stage was immediately halted due to the immediate severity of the accident.

“I couldn’t see the concrete block so it was very unexpected and knocked the wind out of us very severely for a lengthy amount of time,” Edwards reflected this week. “The impact wasn’t expected because all I could see was a bale.”

Having nicked a kerb on the right-hander previous, Edwards missed the next left and out he went.

The assistance of the two cars behind, Alistair Fisher and Josh Moffett, was highlighted by Edwards.

“Had it been more serious, it’s obviously good to know that almost the first emergency service is the car behind,” the Welshman said. “It’s a good message and obviously a very good showing by Ali and Gordon in that situation despite the pressure of the rally.”

At the next service, Fisher had suddenly found himself back in the mix.

He trailed Josh Moffett by just one second with three stages to go. As he readied for Gartan, High Glen and Atlantic Drive, Fisher was a contender again.

He thought back to the days of watching his uncle, Bertie - a four-time Donegal winner in an Opel Manta and a Subaru Legacy in the 80s and 90s - and of feeling the buzz around service, then at the Milford Mart.

“It’s the highlight of the season,” he beamed.

He, too, would soon count the cost of misfortune.

“A disaster to be honest,” he would reflect. “It wasn’t meant to be. We’ll live to fight another day.

“The margins are fine here.”

Donegal was important, too, for Tarmac Championship points.

And, yet, there they were at the start of the Atlantic Drive stage, Fisher’s competitors assisting in changing a puncture, making sure he got going again. One image shows driver Cathan McCourt replacing the passenger wheel, which had to come off for them to bleed the brakes.

Edwards spoke too about the wafer-thin lines between the crews.

“There are no tenths given,” he said on Saturday evening at Parc Ferme.

“We had a mistake on the first Knockalla, which pretty much cost us the difference that we’re behind now.  We have tried hard and we haven’t left anything behind. We gave a little bit away on one stage, but when you’re trying to work out where you lost .9 of a second over nine or ten kilometres, it shows the level that everyone is at.” 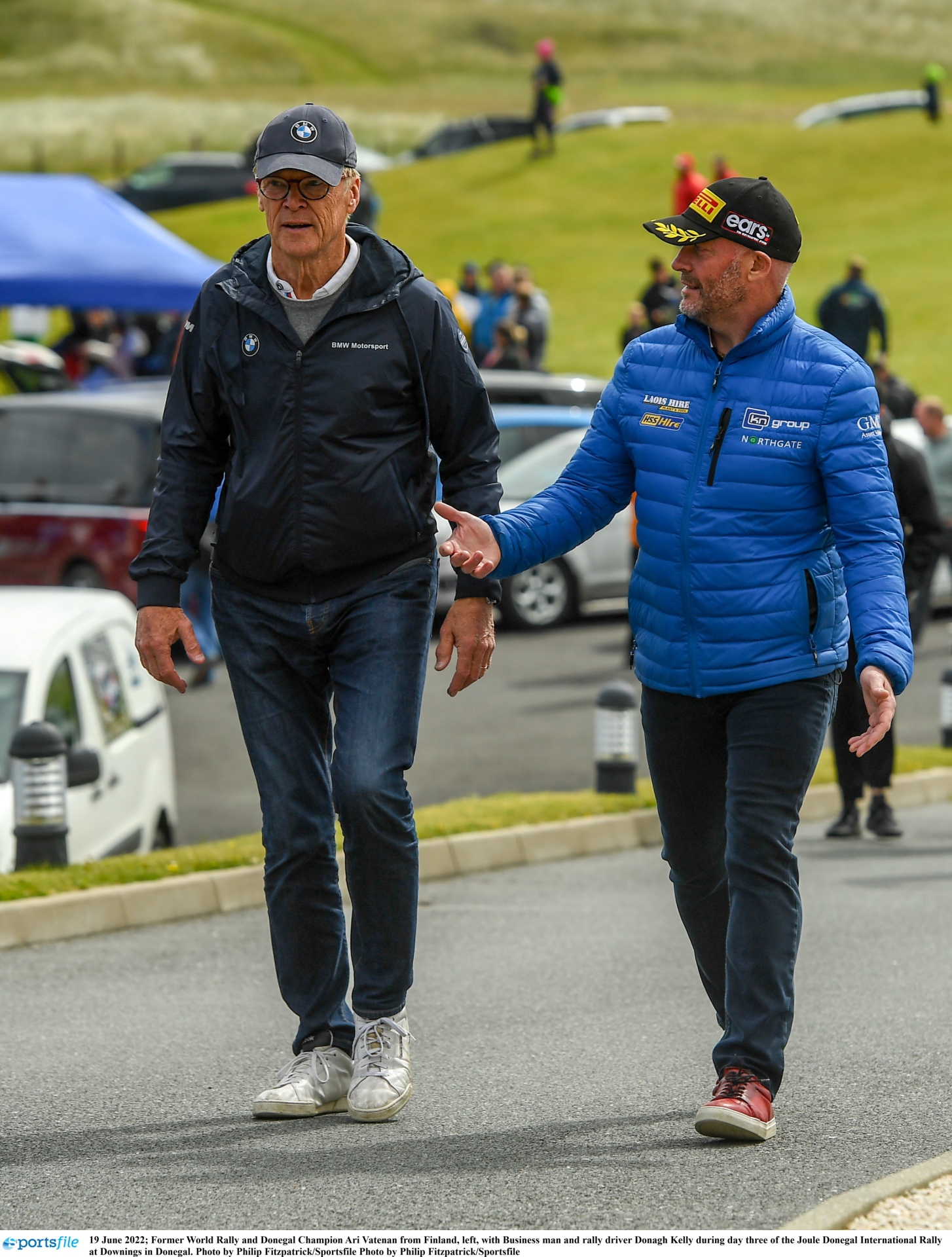 Edwards was able to reflect that his other run at ‘legendary’ Knockalla was a ‘career high’.

Some wondered whether Edwards, then with what might have seemed a comfortable advantage, was pushing a little too over-zealous when he crashed out.

“Twenty seconds would soon disappear in some of those stages if you took your eye off the ball, so I’ve got to drive quick,” he noted.

Moffett went to the last stage with a 51.1 second advantage, but even at that his stomach churned.

“I was a bag of nerves for that last stage,” the Monaghan man said.

The nerves whistle for the crews right through the field.

Joseph Kelly has watched the Donegal Rally since he was a boy. He had racked up plenty of stage miles in recent times, but last weekend was his first to tackle Donegal.

“A real rollercoaster,” was how he described it, “with Friday being so slippy to Saturday being really fast. The nerves were there, It was my first time to sit in the car for three straight days. It’s the only place in Europe where it’s like this.”

The enjoyment was evident all throughout the weekend.

“Everyone is laughing coming off the stages so that says a lot,” Callum Devine remarked at one point.

“The adrenaline and the feeling inside the car is just unreal,” Edwards added.

Amy Burke was on the notes in a Civic VTi on Sunday in the junior category. Midway through Atlantic Drive, her notes were impeccable.

A brief pause followed and it dawned on Newtown man Stephen Gallagher, the driver: ‘The famous shed!’

The pair had become the latest in a long line to land into Hugh McClatchey’s now iconic shed - one of the landmarks of the Donegal Rally. The footage was widely shared this week, the laughs and the feeling inside the car obvious even to the outside viewer - a flavour of how, with 210 entries across the main, junior and historic fields, Donegal has become one of Europe’s biggest rallies. Everyone wants to be here.

Speaking of small margins on Sunday at Atlantic Drive, we couldn’t help but think back to 2016. The Drive was then the penultimate stage. Keith Cronin led the way as he headed for Fanad Head.

When the sums were toted, they won by 0.5 seconds.

That win marked the first of a three-in-a-row for Kelly and Barrett. The 2019 staging saw Kelly tragically killed while competing on the Fanad stage.

Last Sunday, Donall Barrett was in the passenger seat of the S12B Impreza in which he’d had so much joy with Kelly. He was there for the demo run with Donagh Kelly driving. Their’s was another rivalry that was masked by a real friendship - one of the features that marks rallying out as different to other sports.

It has a habit, too, of pulling on the heartstrings in all sorts of ways.

In Donegal, it just means more.

Luke Barry from DirtFish, the world-renowned rallying brand, was in town last weekend.

“You’d have to go very far and wide to discover a love for a rally as deep as what exists for Donegal,” he wrote. “I’m racking my brains trying to think of a finer spectating experience than what I had on Saturday up on Knockalla, but I really can’t think of one.