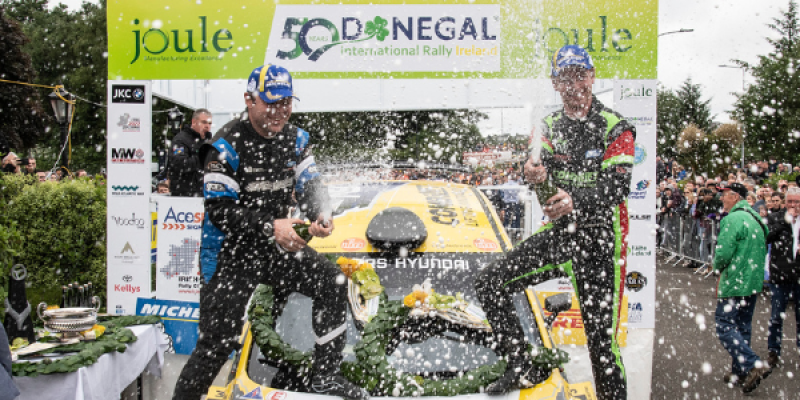 The jewel sparkles as bright as ever.

High stakes, high speed and high drama marked the return of the Donegal International Rally at the weekend.

Rally fans flocked in their tens of thousands as the classic stages served up titanic tussles through the three days.

Josh Moffett popped the champagne’s cork at the Mount Errigal Hotel on Sunday evening amid exciting and emotional scenes.

The Monaghan man had 46.7 seconds to spare after Callum Devine and Matt Edwards - each having had their spells at the head of the pack - crashed out on Sunday.

Even when Alastair Fisher, who was just 3.8 seconds behind at the time, suffered a puncture on the penultimate stage, High Glen, Moffett couldn’t relax.

“We had a breather going into the last stage, but it didn’t settle the pressure anything,” Moffett said.

“We worked away all weekend and we pushed so hard. To get home is unbelievable. We were so, so careful on that last stage. I’m just so glad to see the end.”

Devine crashed out on special stage 15, Gartan, having led from the first stage on Friday. His exit allowed Matt Edwards, the three-time British champion, to take command, but his event ended on SS17, Atlantic Drive.

Moffett follows in the footsteps of his brother Sam in winning Donegal. It’s eight wins from eight starts for Moffett in the 2022 Irish Tarmac Rally Championship, but there was no doubt that Donegal stands tallest of all.

“It’s one of the best moments of my career,” Moffett said after winning in a Hyundai i20 R5 alongside co-driver Andy Hayes.

“Coming home with a win from here is pretty special.

“We kept fighting the whole time and we got ahead. We’re over the moon. We’ve won a lot of rallies, but this is special. Coming off and winning Donegal is brilliant.”

This is the one I’ve always wanted,” Gallagher said.

“It’s been a long time in coming. It’s the only rally we’re building up for. I don’t do a whole lot of rallying with work. I’m over the moon, delighted.”

Edwards mightn’t have made it to the finish, but the Welshman was high in praise of the event.

He said: “The stages are fantastic. “They’re classics. It’s quite something to be a part of.”

The Donegal International Rally toasted its 50th anniversary this weekend and it was a fitting return for the event following a hiatus since the 2019 staging.

Covid-19 put the brakes on the rally in 2020 and 2021 and Moffett was the first winner since the tragic death of three-time winner Manus Kelly while competing in the 2019 event.

The Kelly family were at the finish ramp to present Moffett with the Manus Kelly Memorial Trophy.

The cameras flashed as the huge crowds swayed for a glimpse. Moffett paused, briefly returning to his cockpit to ensure his helmet, which bore an emblem remembering the Glenswily icon, was in the shot.

In many ways, it was the perfect finale.