Fintan Dewhirst was zapped last Friday evening as he returned to Glenties having had no sleep for a day after winning a European silver medal.

His mother, Rosemary, was driving him from Dublin Airport, where he had media obligations to attend to before the spin home.

When they eventually rolled into Glenties, the sleepy Dewhirst soon stirred.

“There was just this huge crowd at the turn up to the house,” the 16-year-old recalls. “As soon as I won the medal, I had to go through doping and then it was back to the hotel to get packed straight away.

“I was on zero sleep. I didn’t sleep at all on the plane. I slept a bit in the car, but the crowd was just huge. I couldn’t believe it when I saw the whole load of people standing there and cheering away for me.” 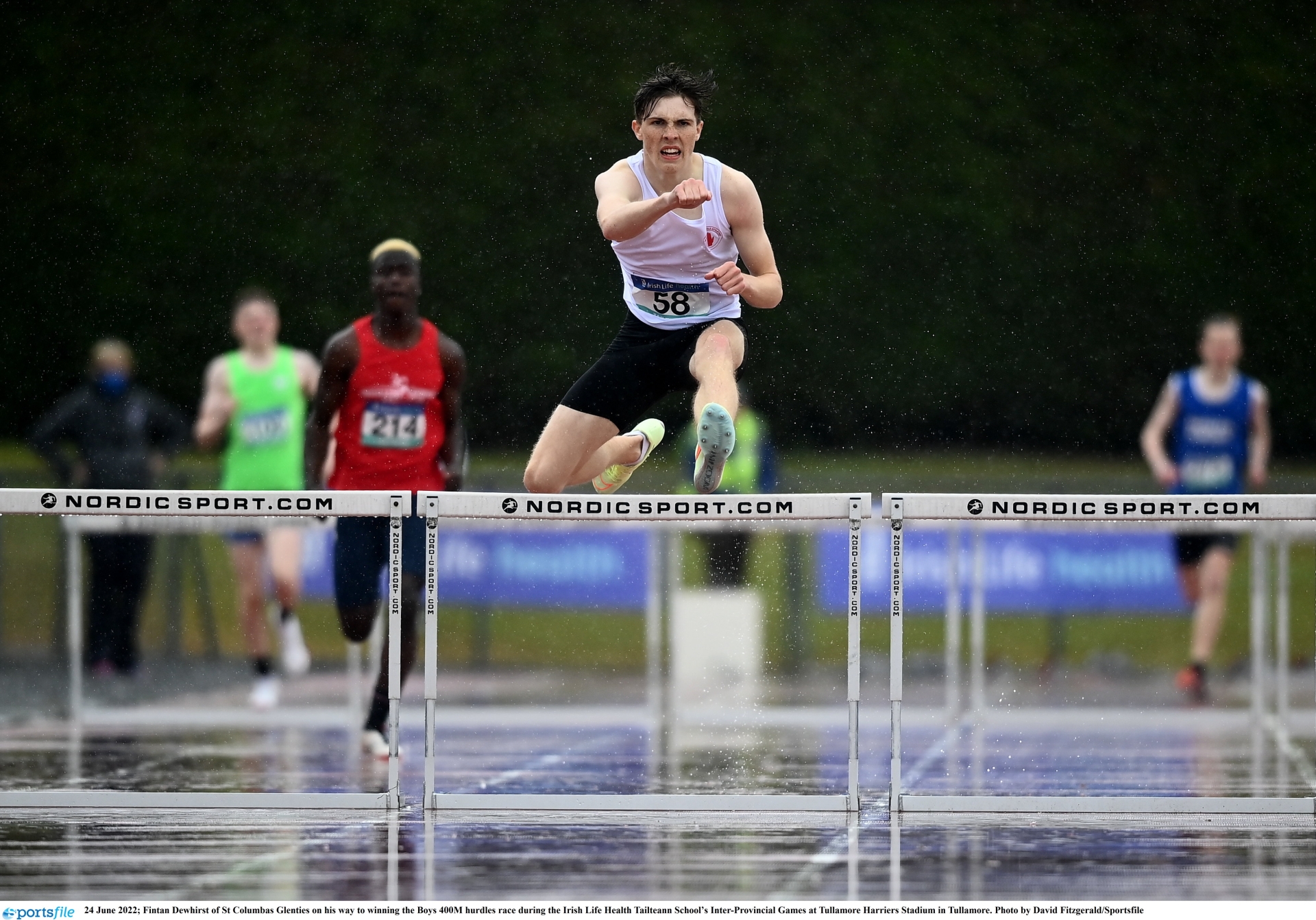 A scorching run, finishing in 51.65 seconds, saw Dewhirst win silver last Thursday.  Dewhirst went to Thursday’s final having gone 52.58 seconds in his heat on Tuesday. The new Irish under-18 record is Dewhirst’s now, with Norway’s Bastien Elnan Aurstad taking the gold with a 50.89 run.

His rise has been rapid.

Just last month, he competed in an Irish vest for the first time.

In France, a massive new personal best time of 52.98 won the 400m hurdles at the Franconville Under-18 international.

As an international athlete, Dewhirst went to Israel as a novice, but returned as a new star of Irish athletics.

“I haven’t had much time to process it all, but the last month has been zero to hero,” he says. “In France, that was my first time to compete for Ireland. Wearing the Irish vest was amazing. Last week was my first time to do that in what I’d call a real competition. This is my country, the country I represent.

“It was a bit new for me. It was fun, but it was nerve-racking at the same time.”

Dewhirst had his own goals when he boarded a flight last Monday. A new personal best and landing the Irish under-18 record were aims that were attainable.

“It just got better and better,” he says. “I was chuffed even to get the PB in the heat.” 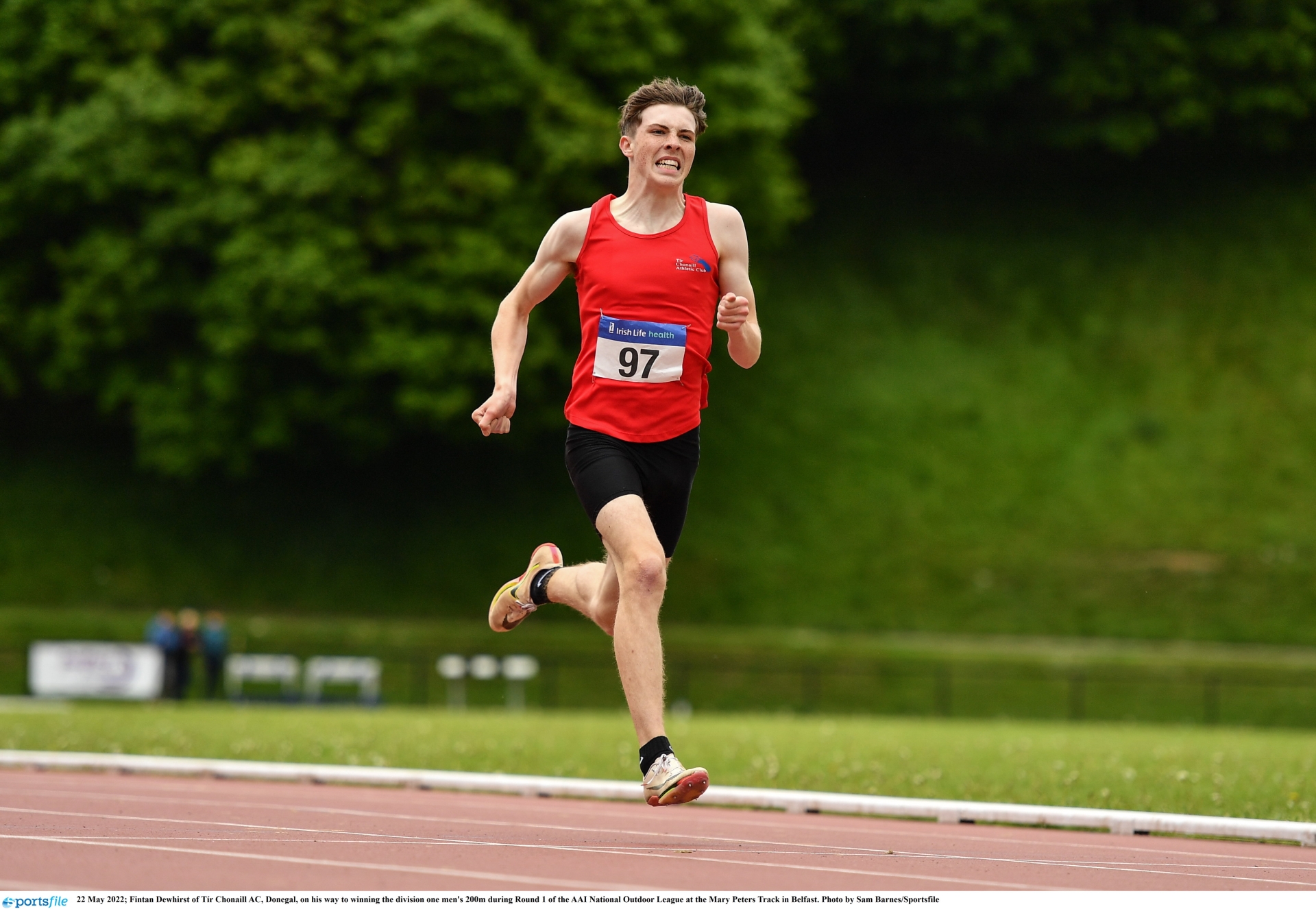 Coached by Brian McGonagle, who he describes as having been a ‘huge, huge help’, Dewhirst went to the final with few mentioning him as a medal prospect. The logistics of traveling to Jerusalem were exacerbated by some difficulties that saw the athletes endure a lengthy wait in Zurich with some left without gear and officials in a panic over the absent items.

“We didn’t get to do much in Jerusalem - it was just hotel and track really. We were supposed to get a little tour, but we got there Monday and I didn’t do too much because I didn’t want to get heatstroke. I was competing for the rest of the week and it was home then.”

Yet, it was the St Columba’s Comprehensive School student who nosed in behind Aurstad and just in front of Gergő Takács from Hungary.

“My thought process coming down the home straight was like: ‘I am really doing this!’ You can see that I ease off at the end; I thought I had it.

“It felt really good just to cross the line and finish. To know that I got second place was just crazy. I told all the Irish people to cheer me on, especially for the last bit. There was a group of Irish people there and everyone was going mad.

“I couldn’t tell you where this all came from. It just started last year and kept going.”

In August, Dewhirst was the silver medalist in the 300m hurdles at the National Juveniles - his first national medal.

Just after the turn of the year, he all-rounder set a new Irish Youth heptathlon record, bagging 4138 points at the National Indoor League in Athlone.

It's no too long ago since, owing to a family wedding, he found himself entered in the National ‘B’ Championships.

“I started competing when I was eight,” he remembers. “My first competition was doing the high jump at Ulsters. Mum is a coach in the club so, whenever I was old enough, I joined up. I loved it from then.”

The multi-eventer put the shoulder to the wheel in October, but was fifth in the combined events at the Irish Schools Championships.

“I was a bit frustrated at that time,” he says. “I just trained really hard in the winter and I had a go. My focus was more on training at that time.”

This weekend, he competes at the Celtic Games on Saturday before competing in Tullamore on Sunday. The focus now, although not a complete priority, will be to attempt an ‘A’ standard for the World Under-20 Championships, which take place in Santiago de Cali, Colombia, from August 1-6.

“I’m going over the higher hurdles now this weekend,” he says. “The PB will probably stay the same for this year with me going onto the higher hurdle, but I’m certainly hoping to beat the time.

“I’m going to be training hard to compete for Ireland any chance I get.”