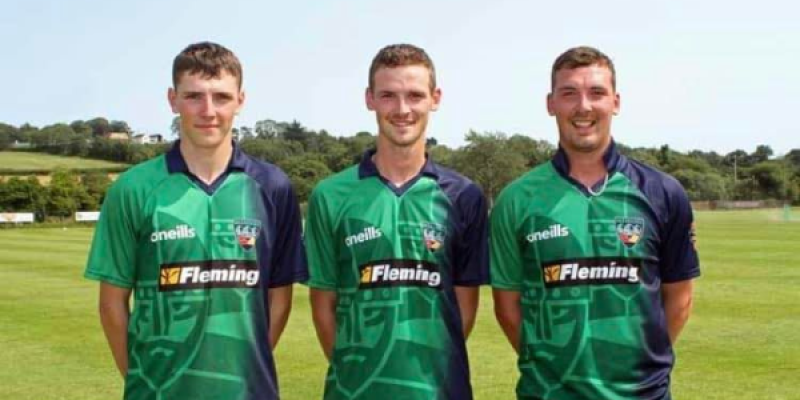 The Macbeth brothers at The Bleachgreen on Monday,

Ballindrait brothers Ryan, Scott and Jack Macbeth all featured for the North West Cricket Union’s ‘Emerging Warrior’s on Monday against the Ireland Academy.

The Warriors, under the charge of Boyd Rankin - the Bready man and former England and Ireland international - won by three wickets at The Bleachgreen, the home of Ardmore Cricket Club.

Scott Macbeth, who plays his club cricket with Bready since moving from St Johnston earlier this year, top scored with 92 runs. Scott seemed on course for a century, with 11 fours and three sixes in his tally, before he was bowled out by Muzamil Sherzad.

Jack Macbeth, who is still at St Johnston Cricket Club, weighed in with six runs as the Warriors reached 280 runs for the fall of seven wickets. It took the Warriors 47.2 overs to reach that mark having been set a target of 278 by the Ireland Academy.

Ryan Macbeth, now of Brigade, claimed the wickets of Walter and Luke Whelan with the former stumped by Jack Macbeth off his brother’s ball.

Scott Macbeth helped take out Ryan Karunakaren, who was the Ireland Academy’s top scorer. Karunakaren was on 78 runs when he was caught by Graham Kennedy off the bowl of Macbeth.

Scott Macbeth featured for Ireland at the Under-19 Cricket World Cup in the West Indies earlier this year and top-scored against India when reaching 32.

Cricket is in the genes of the Macbeth boys. They are grand-nephews of Irish cricket legend Roy Torrens while their father, Ian, and uncles Alan and David are stalwarts at St Johnston Cricket Club.