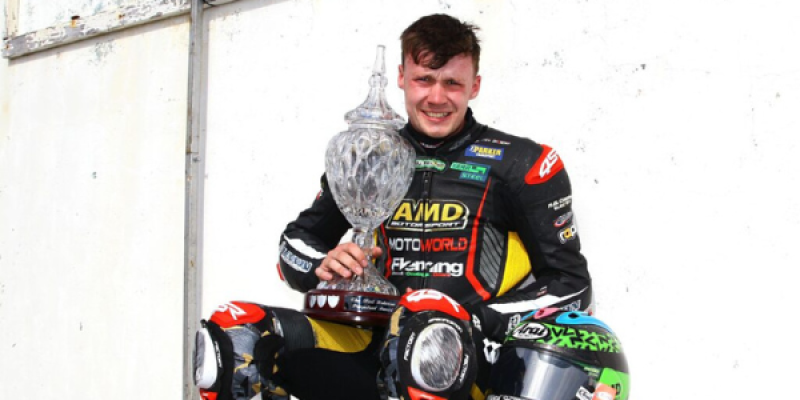 Richard Kerr took victory for the AMD Motorsport team at Bishopscourt on Sunday in a successful foray into the Irish Superbike Championship.

Competing at the venue for the first time in three years and for the first time on the CBR1000RR Honda Fireblade, the 22-year old quickly got dialled in to the 1.824-mile circuit despite limited track time and qualified in third place behind championship leader Alastair Seeley and Jason Lynn.

Saturday saw two races take place with the first, held over the shortened distance of six laps, seeing Seeley and his Yamaha R1 Superbike lead from start to finish but Kerr lapped more than a second quicker than what he’d done in qualifying and was only 4.4s adrift at the chequered flag.

The second encounter later in the day, held over eight laps, followed a similar pattern although Kerr led in the early stages on this occasion. The Donegal rider upped his pace further to 1’07.094s and, although former double British Champion and record North West 200 race winner Seeley managed to overhaul him, Kerr claimed another fine second place.

The County Down venue again enjoyed perfect conditions on Sunday and although Seeley completed his hat-trick in the first Superbike race, Kerr again led in the early stages and set yet another personal best, 1’06.389s, on his way to a third successive runner’s up position.

That just left the feature 12-lap Neil Robinson Memorial Superbike race and Kerr saved the best until last leading from start to finish to win the highly prestigious trophy that has been won in the past by some of the sports finest riders including Joey Dunlop OBE MBE and Carl Fogarty MBE. Seeley crashed out on lap four.

“I really enjoyed the weekend and ending it with a win and the Neil Robinson Memorial Trophy was the obvious highlight,” Kerr said.

“It was my first time at the circuit in three years and my first on the big bike and there was no time to settle as it was straight into full attack mode for qualifying. I got quicker and quicker with each outing though and I was pleased with my times on the Stock bike.”

“Alastair was on a Superbike with slick tyres, so he had the edge and he was strong getting out of the corners particularly coming onto the start and finish straight.

“He got the better of me in the first three races but then tucked the front in the last when just behind me, so it was nice to get the win and a big trophy.

“It was good to get a run out ahead of Brands and the Sunflower meeting being held here later in the year so a big thanks to the AMD Motorsport team and all my sponsors.”

Kerr and the team head to Brands Hatch, Kent this weekend for round five of the Pirelli National Superstock Championship where he’ll be looking to add to the win achieved last time out at Knockhill.