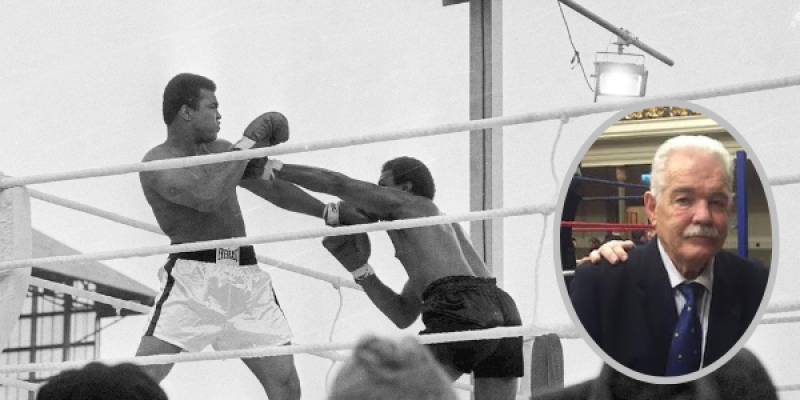 Paddy Doherty can still feel the noise, even now, 50 years on.

The year was 1972 and Ballyshannon man Doherty, a Commonwealth Games bronze medallist two years previously, was on the way to the ring for his sixth fight as a professional boxer.

Doherty was 3-2 as he headed for the canvas and a middleweight tussle with Welshman Bobby Ruffe.

At Croke Park, 20,000 people were in awe of the contest that preceded Doherty versus Ruffe.

Muhammad Ali stopped Al ‘Blue’ Lewis in the 11th round of a 12-round fight.

‘He risked life and limb to make it to the sanctuary of the dressing rooms,’ the Irish Independent said of Ali’s exit.

‘Sections of the crowed mobbed the former world champion as he made his way across the pitch from the ring.’

Doherty was in the middle of it all as he set to work.

“The crowd was just phenomenal. Once the referee stepped in between Ali and Lewis, the crowd went mental,” Doherty recalled.

“I was on just after Ali. I met him at the Gresham Hotel at the weigh-in and when I was on the way out to the ring he shook my hand and patted me on the head going by.

“Ali had so much security around him. He was a gentleman and very down to earth. There was a great presence around him. You knew that you were in the company of greatness.”

Lewis was a sparring partner of Ali’s and was chosen to face the great Ali at Croke Park. Michael ‘Butty’ Sugrue put up £300,000 to get Ali to flight Lewis in Dublin.

‘It was a night of colour and excitement with a marvellous atmosphere prevailing in the stadium,’ the Irish Independent reported.

‘Muhammad Ali was acclaimed by a 20,000 crowd at Croke Park last night after he had beaten Al ‘Blue’ Lewis in the 11th round of their 12- round contest. The referee stopped the contest one minute, 15 seconds into the round as Lewis could no longer defend himself.

‘Gardai battled with spectators the whole way from the ring to the tunnel under the Cusack Stand to clear a passage for Muhammad Ali as the crowd tried to get near him and it was just one other indication of the way he has captured the imagination of the Irish crowd since his arrival in Dublin.’

Lewis was down in the fifth round and he gave up in the 11th round.

The night wasn’t quite the roaring success it had promised, however.

“It was great to look forward to it, but I left Dublin that night with only £100 in my pocket when everyone else had got their cut out of the £400,” Doherty said.

A year earlier, Doherty saw Ali in an exhibition bout with his own sparring partner Johnny Frankham at the Royal Albert Hall in London.

The paper, under the headline ‘Doherty too good’, reported: ‘Former national amateur champion Paddy Doherty from Ballyshannon saw his contest with Bobby Ruff of Swansea stopped in his favour in the second round of their middleweight affair. The smaller Irishman was far stronger and midway through the second round opened a cut over Ruff ’s left eye and referee Paddy Finnegan, at the second examination, stopped it.’

The above is an extract from Boxing In Donegal: A History, the 2021 book written by Chris McNulty