The Finn Valley AC man was just 0.05 seconds off his own Irish record in reaching the 800m semi-finals in Oregon 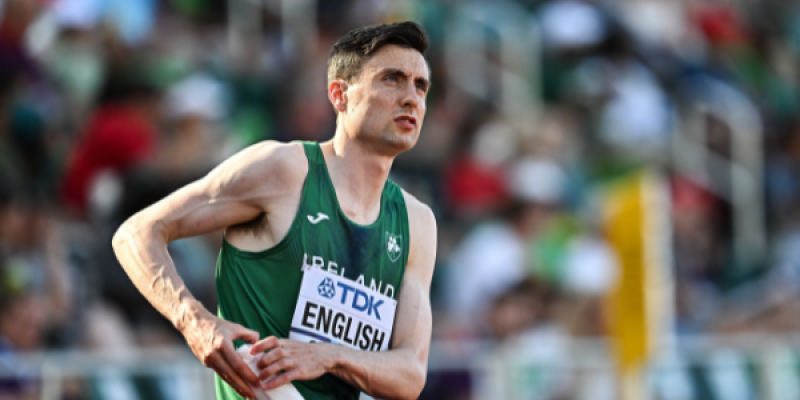 Mark English will run in the 800m semi-finals at the World Athletics Championships. Photo: Sportsfile

Donegal athletics fans have another redeye alarm call with Mark English ready for his 800m semi-final at the World Athletics Championships.

At 3.18am on Friday, the Finn Valley AC man goes against some of the world’s best middle distance runners in his semi-final following a magnificent heat on Thursday morning.

English was just 0.05 seconds off his Irish record when running 1:44.76 at the Hayward Field in Eugene, Oregon.

Out strong from the get-go, English stayed with the front-runner, Sweden’s Andreas Kramer.

The Donegal doctor stayed on strongly and while he finished fourth in the heat, the disqualification of US athlete Jonah Koech, for barging Kramer, upgraded English to automatic qualification.

The two-time Olympian and three-time European medalist would’ve been a comfortable qualifier in any case. His time was the fastest ever 800m by an Irish athlete in a Championship race and was inches from the 1:44.71 he clocked last summer in Spain when qualifying for the Olympic Games.

The new season’s best time also secured English of his place at next month’s European Championships in Munich.

English will be in the last of the three semi-finals so will know beforehand the territory he needs to run. The fastest two in each heat plus the next two fastest times secures a place in the final.

Spaniard Álvaro de Arriba, a regular competitor of English, is in the same heat, as is world under-20 gold medalist Emmanuel Wanyonyi of Kenya.