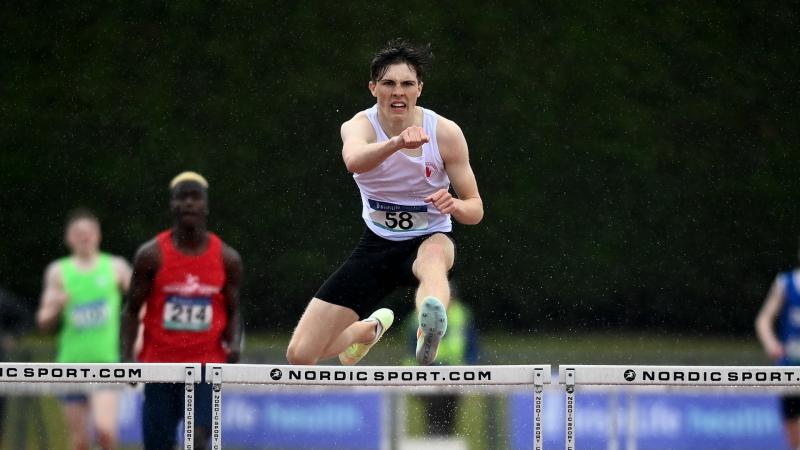 Fintan Dewhirst in action in the 400m hurdles

Four Donegal athletes have been selected to compete at the Welsh Under-20 International next month.

Tir Chonaill AC’s European Under-18 silver medalist Fintan Dewhirst will be in action in Swansea on Wednesday, August 17.

Dewhirst became Ireland’s seventh European Under-18 medallist when taking silver over the 400m hurdles in Jerusalem. Dewhirst finished in a new Irish Under-18 record of 51.65 seconds at the Hebrew University Stadium.

Dewhirst will go in the 400m hurdles in Wales.

Gallen won the under-19 hammer in the recent Irish Juvenile Championships in Tullamore. Gallen threw out to 50.02m.

Gillespie was just 0.04m off the under-19 triple jump at the same Championships. He jumped a 13.81m and added a long jump gold and high jump bronze.

At the Under-23 Championships, Gillespie recorded a new PB of 13.99m to win gold.

Kelly was the under-19 1500m and 800m champion recently and will join the ranks of the NI and Ulster team for the international against teams from England, Scotland and Wales.