Fintan Dewhirst and Conall Mahon were among the key performers as Tir Chonaill AC came out on top in Division 1 of the AAI National League on Sunday in Athlone. 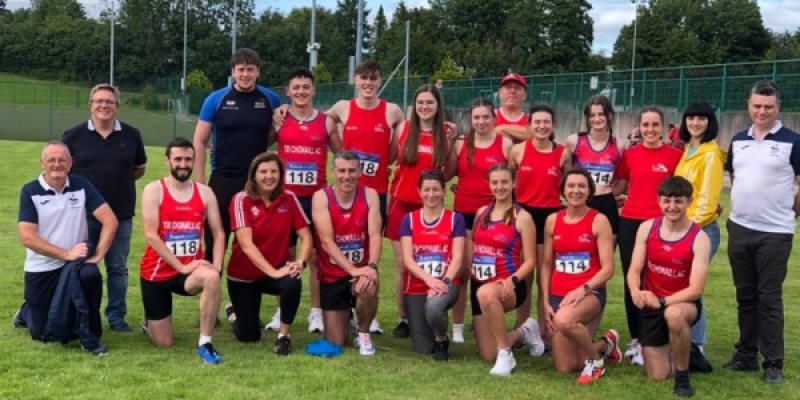 Tir Chonaill AC men won the Division 1 competition in round two of the AAI National League on Sunday in Athlone.

World Under-18 silver medalist Fintan Dewhirst helped to lead the way for the Tir Chonaill squad.

Lifford-Strabane AC’s Brendan O’Donnell donned the Tir Chonaill vest for the competition and he won the hammer when reaching out to 58.66m. O’Donnell was also second in the shot put, throwing a best of 13.28m.

Gareth Crawford, another Lifford-Strabane AC man who was representing Tir Chonaill, won the javelin with a 64.87m best.

Jack Murphy’s 2.80m best won the pole vault while Robert Anderson threw to 5.67m to win the weight for distance.

Anderson was fourth in the 3000m walk and the discus, while Jack Kelly came fifth in both the 800m and 3000m steeplechase.

Michaela Galvin won the triple jump when going out to 10.58m and was second in the javelin with a 22.19m throw.

Kitty McNulty won the pole vault, going over the bar at 1.70m, while she was third in the 3000m steeplechase and fourth in the high jump.

Kathryn McDevitt clocked 27.36 seconds for second in the 200m and her 13.12 seconds saw her finish second in the 100m. McDevitt also stepped in for a fourth-place finish in the shot.

Galvin, Lexi Campbell, McDevitt and Helen Quinn were second in the 4x100m relay, finishing in 54 seconds.

Alexis Campbell won the long jump with a best attempt of 4.73m and she was fourth in the 400m.