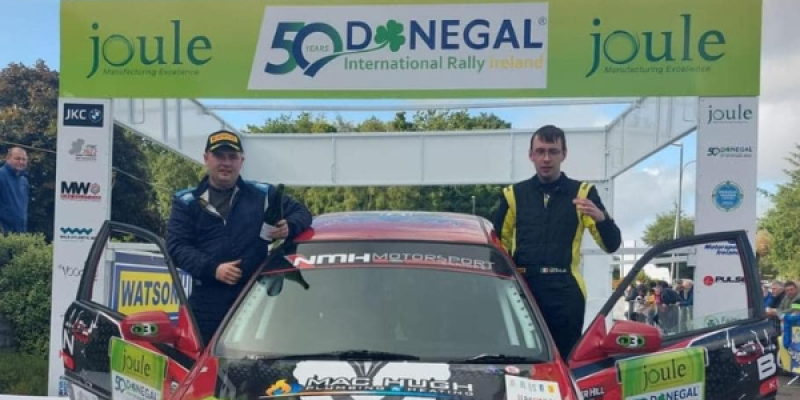 Ryan MacHugh and Declan Boyle after the Donegal International Rally in June.

When Ryan MacHugh stood at the end of the third stage of the Cork 20 International Rally at the weekend, little did the Frosses man think he’d be crowned the Irish Tarmac Junior Champion on Sunday evening.

The distributor was gone in the Honda Civic VTi and needed towed back to service. With the aid of his father, Brendan, they towed back to the service area to attempt repair.

Over the Ardfield stage, MacHugh says he was ‘going as hard as we were all year’.

In service, they got the issue sorted and almost defied the odds to get to the finish on Sunday evening despite falling to the rear of the field. After the 15 stages, MacHugh and his co-driver, Declan Boyle from Glenties, were well down on the junior winners, Evan and Aaron McEvoy. However, in finishing MacHugh scored the point to seal the title; he now has an unassailable advantage over Jason Farrell.

“I registered for the Championship and didn’t have much intention of going it to be honest,” MacHugh says.

“I knew what I had to do at the weekend. We knew that we didn’t have to push very hard so we said at the start that we wouldn’t go mad. We were going as hard as we were going all year on stage 3.

“Near the end of the stage, the distributor went. I don’t know if we were up or down on that stage. It was a lot drier so we pushed a bit hard.”

MacHugh competed for the first time in the 2021 Donegal Harvest Rally and won the junior category.

The calendar turned and MacHugh headed for Galway, where gear linkage issues hampered his run.

“In fairness, Galway was my own fault,” he says. “We blew the engine before the rally in Galway and I was working at the car myself beforehand.

“The Civic has been good for us this year. The first time she let me down was the weekend - and that’s a common problem too.” 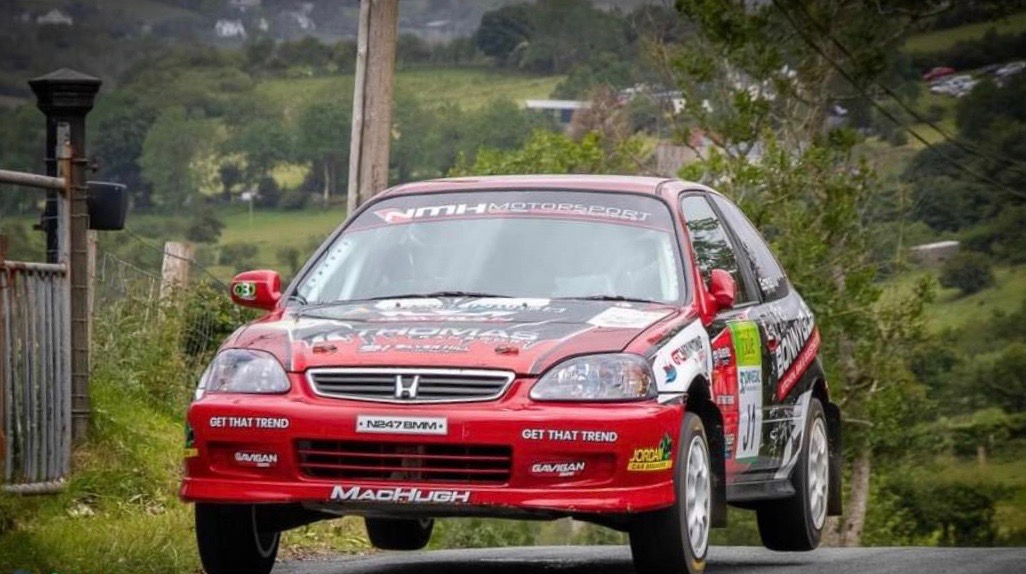 MacHugh won the junior category at the Circuit of Ireland Rally and was fifth in Killarney. All of a sudden, the points were clocking up.

Motorsport is in the blood. His cousin, Declan Gallagher, has been one of the most popular driver’s for an age now. ‘The Milkman’ rarely doesn’t dazzle at the wheel of his now-iconic Toyota Starlet.

His brother, Neil, runs rally cars for David Kelly and Garry Jennings and his uncle, Joe, has also competed, winning the Donegal Harvest on a couple of occasions.

The highlight of MacHugh’s year so far was in mid-June: ‘Donegal’.

An epic battled brewed in the junior rally. Over High Glen, the penultimate stage, MacHugh took 10 seconds out of Pettigo’s Dylan Eves, the leader. Mickey Joe Brown from Brockagh was just 2.8 seconds on MacHugh’s tail.

Eves spun and lost a further ten seconds to MacHugh, who was 2.2 seconds quicker than Brown. With a margin of five seconds, MacHugh was popping the champagne at the finish ramp.

“Donegal is always the one,” he says. “It’s the one everyone from Donegal - and everywhere - wants to win. It’s a great one to get. I had the eye on it all year and was the one I wanted to win most. It didn’t start too well because we were 15 seconds down after the first stage so we had a lot of time to make up.”

With the Championship crown sealed, with a round to spare, MacHugh’s focus is now on the Donegal Harvest Rally in October. The Killarney Historic Rally in December is another option.

“I’m delighted to win the championship,” he says. “I was happy to get it after Sunday. It’s a shock that I won it, to be honest. I enjoy rallying and I’ll see now what to do for next year. I’ll talk to the boys who help me, they’re always on board with good advice. You couldn’t buy that. I’d love to maybe try to get into a Rally4 car, but we’ll see what we can put together.”