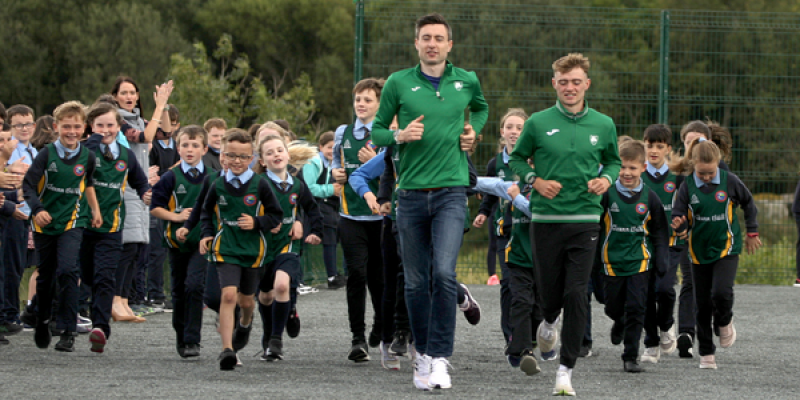 Mark English and Sean McGinley lead the Glenswilly NS athletes on a lap of their new track. Photos: Thomas Gallagher

Fresh from wining bronze in Munich at the European Championships two weeks ago, English cut the tape before leading the Glenswilly NS athletics team on a lap of the new gravel track..

“It’s an amazing facility. I would have loved something like this growing up. Make the best use of it now and give it everything.”

English was joined by fellow Finn Valley AC athlete Sean McGinley, a past pupil of Glenswilly NS and a multiple national gold medalist.” 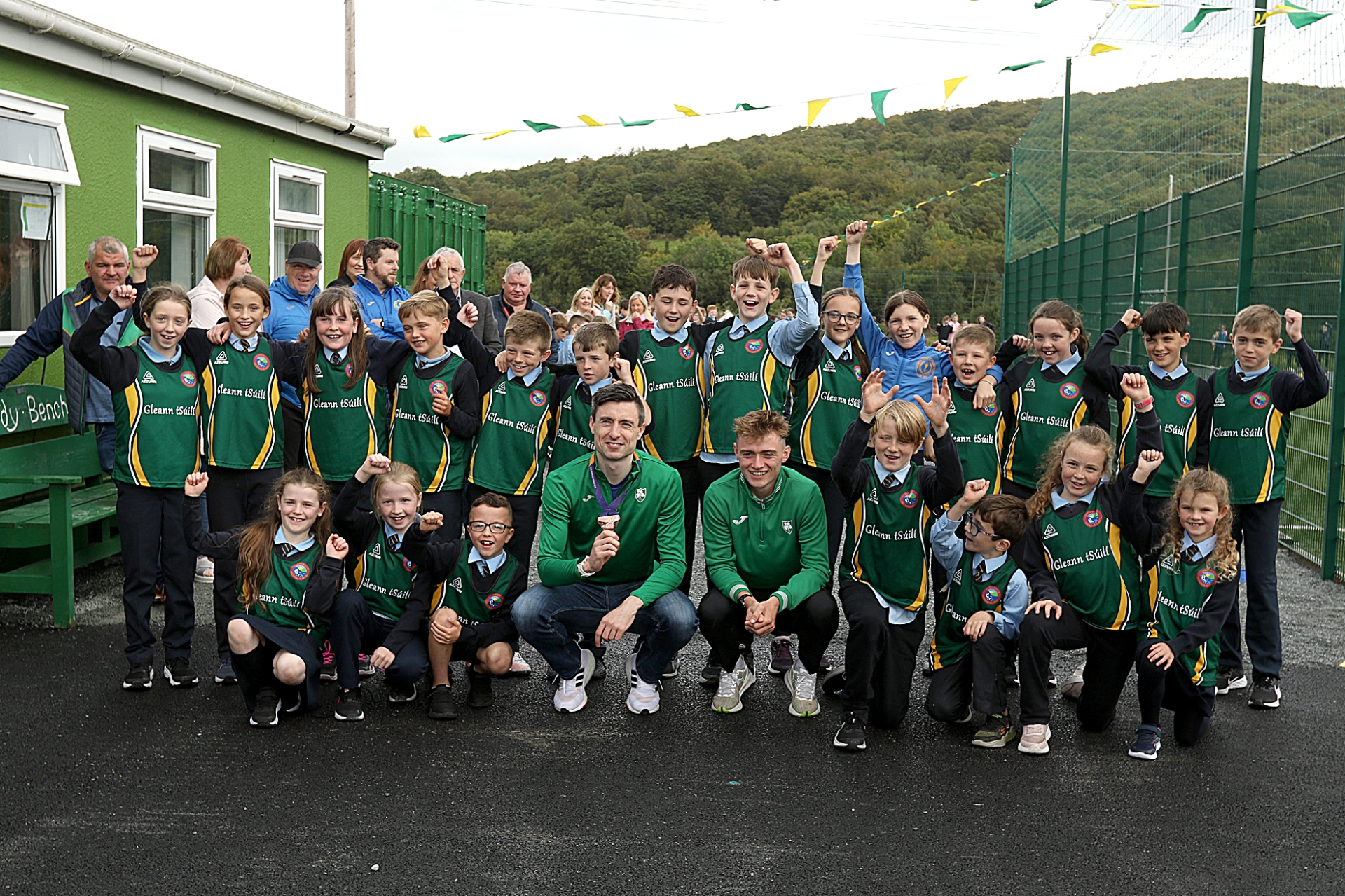 The 200m track runs around a recently-developed astroturf facility at the 260-pupil school.

Glenswilly NS Principal, Mr Joseph Gallinagh, hailed the efforts of those behind the school’s athletics team and the input of the local Olympian YAC, who were represented by Martin O’Donnell and Bryan Faul.

The help of the Board of Management, under the chairperson Eileen Quinn, was noted while contractor, Sean Bonner, came in for special praise.

Former Irish athletics team manager Patsy McGonagle was also among those present for the occasion.

“Patsy has been in more stadia and tracks in the world than most of us, but his advice for us was so important in what we were doing,” Mr Gallinagh said. 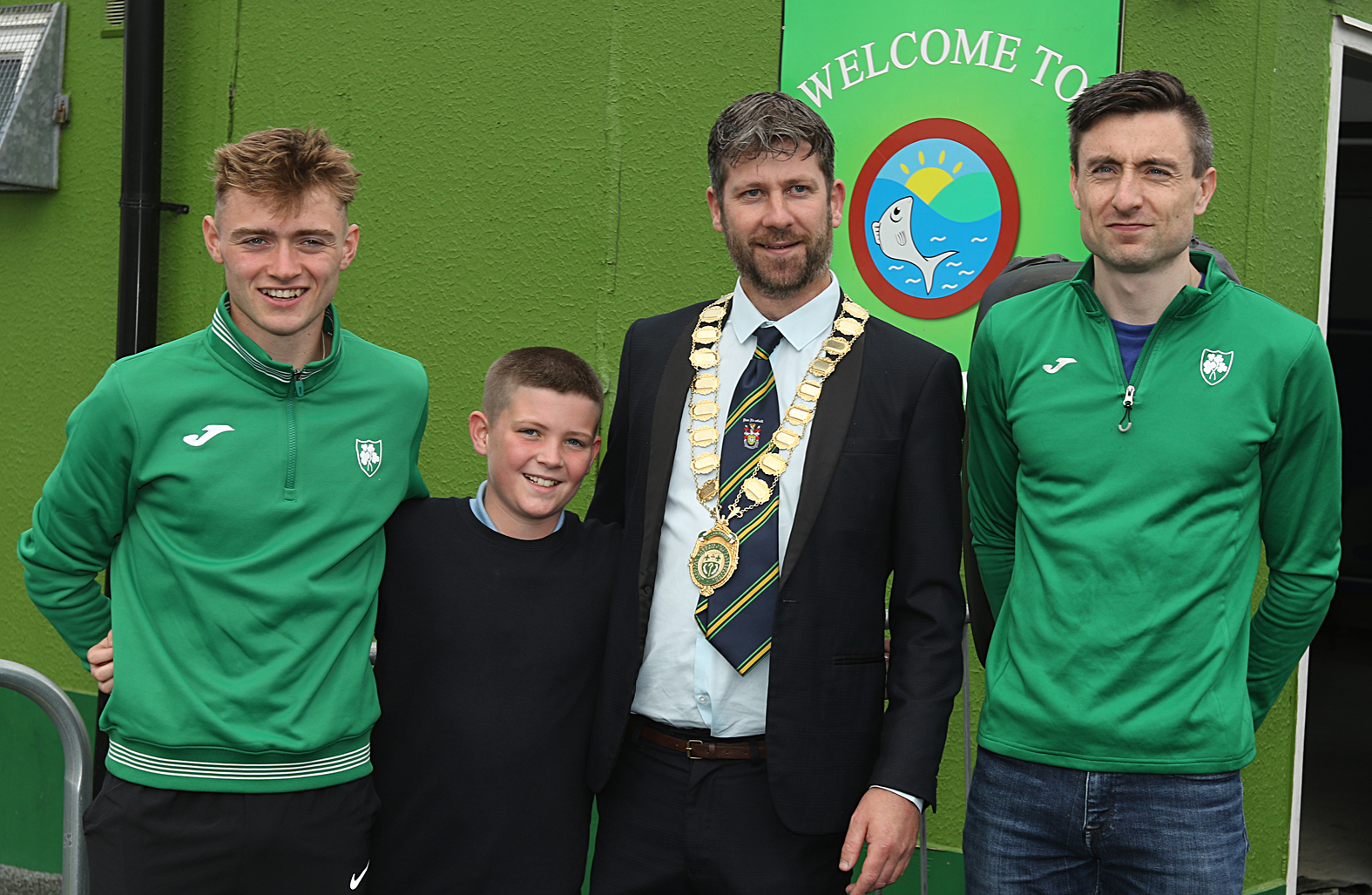 Funds raised by Anne Marie Roche, who organised a series of races, and the Paddy McDaid Honda Run were highlighted.

Mr Gallinagh said: “There is a lasting legacy in the area here.

“It is also very important that we keep continuing to improve the facility and we will keep building. Basic and all as this track may be, who knows it could inspire the next Mark English or Sean McGinley.”

Councillor Donal Kelly, the Mayor of the Letterkenny-Milford Municipal District and a former pupil at Glenswilly National School, praised the progressive school for the development.

“It is great to see this kind of work being done in the school and the community,” Councillor Kelly said.

“I was just thinking how far this school has come since I was here. It’s a fantastic facility here now and we are very fortunate to have this in our area.”