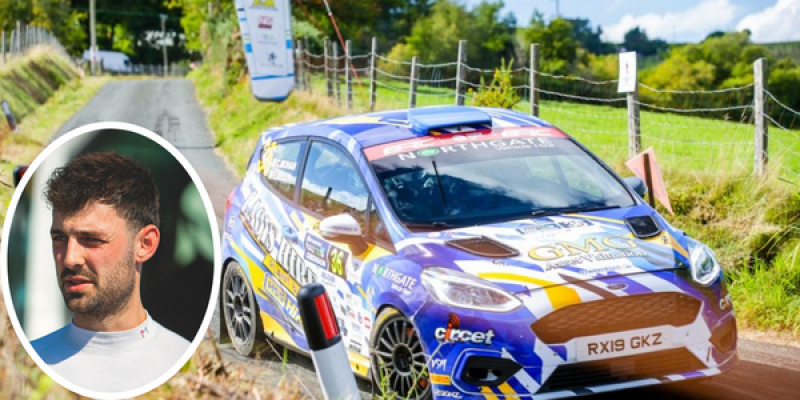 Eamonn Kelly (inset) in action at Rali Ceredigion in Wales.

Eamonn Kelly was never going to escape a life in motorsport.

“I was always doing something around speed as a kid,” Kelly, the newly-crowned Junior British Rally Championship winner, says.

Kelly popped the champagne at Rali Ceredigion in Wales on Sunday evening, the Frosses man topping the charts in the Junior BRC, an ultra-competitive series of multi-surface events.

Last year, Kelly competed in the Junior BRC for the first time and came second, beaten only by William Creighton.

“Every single rally last year, we picked up something to carry forward,” he says. “The effort last year has paid off this year; we knew after last year what it would take.

How the Inver parish is leading the way in motorsport

“I came in with a crop of really fast drivers last year and took on brand new events. I had never rallied on gravel before and the Junior BRC is primarily run on gravel. There were a lot of firsts for me. I tackled everything with a car mindset and learned a lot.”

Last month, Kelly inched himself closer to the overall title when winning the Grampian Forest Rally in Scotland. With three rounds to go, he headed for Aberystwyth knowing that the title was within touching distance.

“After being second last year, we came in believing we could do it this year,” he says. “It has been the goal for the whole year. To finally get it and achieve it so early on, it’s a special feeling. It’s unreal. It was just class and it’s a credit to the hard work of the whole team. We came in last year to the Junior BRC as newcomers and we realised that we needed a big effort to do well.”

Outside of the cockpit, Kelly is as meticulous as he is behind the wheel of the Fiesta Rally4.

He has been working with Alan Heary, a sports psychologist, this year.

“I worked a lot on settling my mind,” Kelly explains. “I look at it as a process and no one event is a big deal. I knew going into Wales that I had three rounds left. I went for it and didn’t put pressure on myself. I knew we had the speed and we had put the work in to make it happen.” 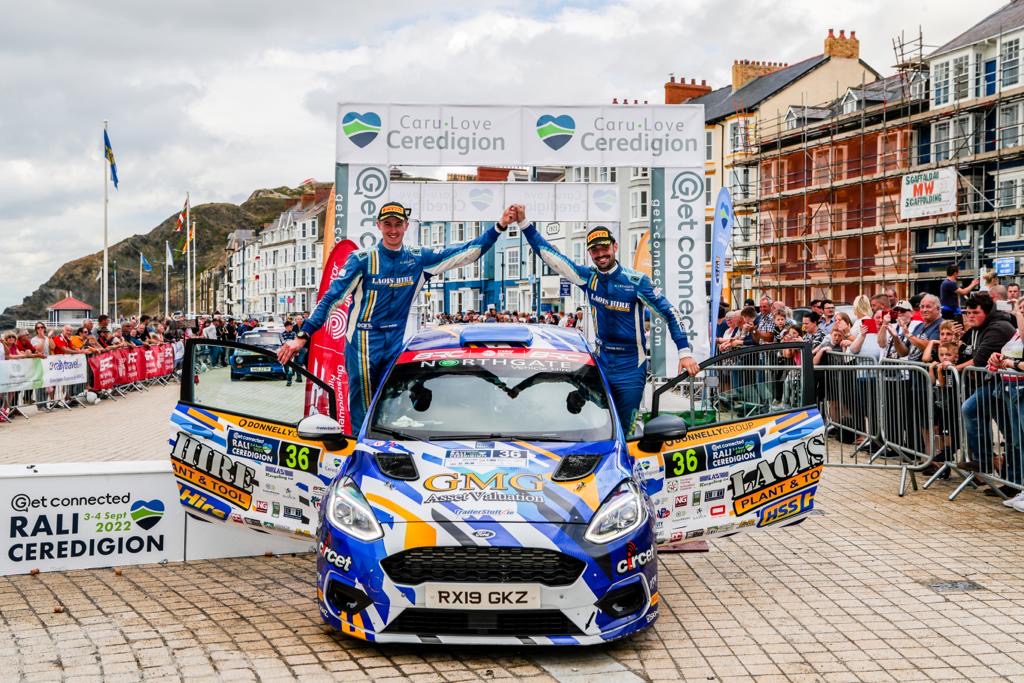 In this game of high stakes and high speed, the experiences are far from plain sailing. On the first stage on Sunday, Kelly momentarily lost control and the car clipped a Church wall, bending the back aces.

“We were fit to push on with the car because of the notes we had and the preparation we had done,” he says. “Still, when we came back in to service and saw the times, I was gobsmacked.

“There is different elements of preparation and the main one is the pace notes. You get a DVD ten days out with a recording of the sages. I will really analyse them and by the time the rally comes around, different sections won’t faze me.

“It’s important to keep fit physically, too. You’re going on 16-mile long stages and that takes a lot of focus, especially the nature of the weekend we competed in there, where it was so long and so fast. Once you’re physically fit, the mental fitness will come and you feel the togetherness coming. I try also to keep relaxed and enjoy the process.” 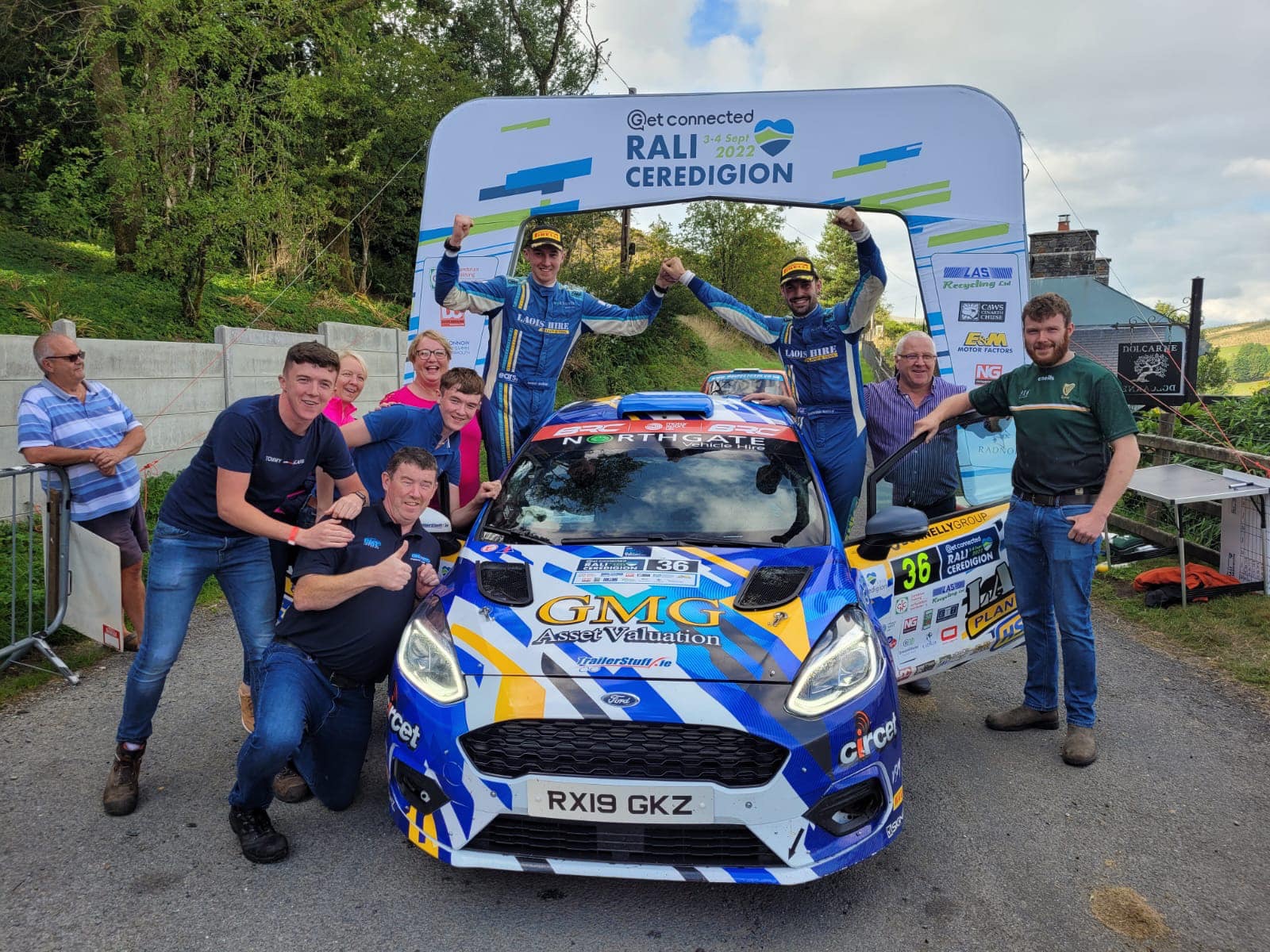 Kelly was the second Junior BRC at the Nicky Grist Rally and the Corbeau Seats Rally and won the section at the Jim Clark Rally.

“We had a really good push then and the Jim Clark was one of our most dominant rubs, We almost felt untouchable. That’s just an unreal feeling.”

At the Nicky Grist Rally, Kelly put the foot down on a big push and caught a car ahead of him only to get dazzled in dust, losing not just time but the power steering in the car for two stages. Still, he clawed back to finish second.

Kelly is quick to point out that he is indebted to his sponsors and supporters - those, he says ‘who have been with me from a lower level, people who are very invested as they want me to succeed’.

He is just 23 and is one of the promising names in the sport.

Kelly can never remember a time when there was no motorsport.

His father, Donagh, was the Irish Tarmac Rally champion in 2015 in a Ford Focus WRC. His father’s success in rallying and business has inspired.

“Dad started off really at the lower end of rallying, working his way up and that came with his own success in life,” he says, “I remember he did a Turkey Run rally around about 2005 in an Evo and he really showed his true talent. When he got the opportunity to showcase the speed in WRC machine, he had a lot of great times and that did inspire me.

“I always looked and saw dad’s passion. I was sitting in recce cars from I was six years of age; I could never escape it. I started in Alltrak Rallysport when I was 11 in Northern Ireland. I did some co-driving with dad when I was 16. It was never questioned and, I suppose, it was just bred into me.

“Dad not only supports me, but he believes in me. That’s a huge confidence boost and he isn’t a bad coach to have - he has been around a lot of bends! Without his belief, it wouldn’t be possible.”

Since 2018, Kelly has worked closely with navigator Conor Mohan. The Monaghan man clicked instantly and the pair have grown close.

“We’ve grown together as a pair,” Kelly says. “Conor is top class. We were both fairly new to the whole thing when we started, but we stuck with each other, learned what works and what doesn’t. We have learned a lot. In this game, you need someone who is on exactly the same page.”

The thoughts have swung towards 2023 and Kelly will receive a supported drive in a Hyundai i20 N Rally2 in a World Rally Championship round as part of his prize for winning the Junior BRC crown.

He is already thinking of making a step up to an R5 car. The Volkswagen Polo GTI R5 previously driven by his father is an option. This year, Kelly and Mohan had the Polo for the Mayo Stages, the Circuit of Munster and the Donegal International.

“That’s the plan for next year,” he says. “The Polo is an unbelievable machine. We’ve not done many rallies, but it was an amazing experience. We haven’t had a chance yet to play with the set up and it’s going to be a new experience and a new chapter.

“We’re talking about some different ideas about Championship races, but we’ll step up in machinery. We’ve got the most out of the front-wheel drive car and it was always the plan - we always said that we won’t move into R5 until we wrung the neck out of the R4 car.”