McCourt sent off as Galway pick up the points 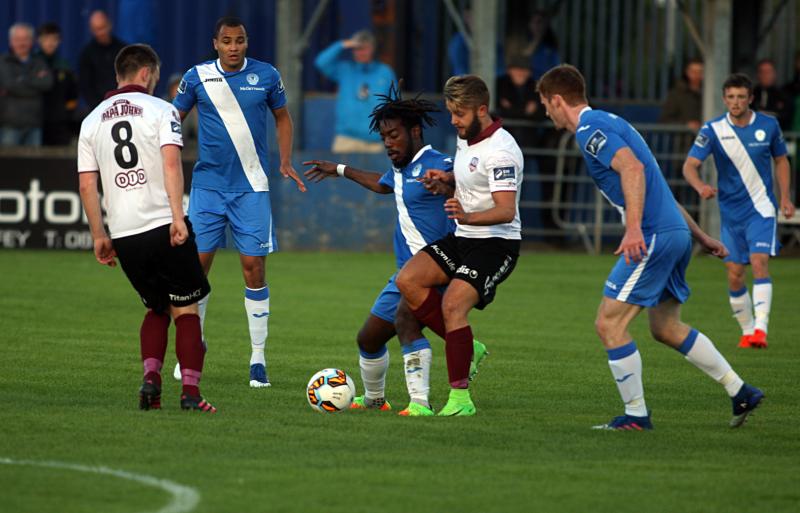 Ronan Murray scored twice in the closing 15 minutes to give Galway United a vital win and maintain their excellent recent record against Finn Harps.

The Tribesmen have only lost once in the league against Harps in almost a dozen games and they were deserving winners of this latest encounter.

Harps weren’t helped by the dismissal of the influential Paddy McCourt following a second yellow card six minutes into the second half.

That incident turned the tide in the visitors’ favour and they took full advantage with a convincing second half display.

With the game level at 1-1, they went in front on 75 with Murray firing home a wonderful free kick from 25 yards.

The same player made it 3-1 on 83 minutes when after getting the better of Killian Cantwell, he turned the ball home much to the delight of the travelling supporters.

It was an impressive win for Galway and an important three points in their battle to move out of the relegation zone.

Harps made just one change from the side that won at Bray last Friday night. Gareth Harkin returned to the side in place of Barry Molloy who dropped to the bench.

Despite reports that a vomiting bug had hit the Galway camp during the week, their manager Shane Keegan was able to field a strong starting eleven which included new signing Jonah Ayunga who has joined on loan from Brighton having spent the opening half of the season at Sligo Rovers.

The big striker was excellent in the first half and caused the home defence no end of trouble. He set up Galway’s opener on 12 minutes when his run and clinical pass released Gavan Holohan and he squeezed the ball past the out-rushing Ciaran Gallagher.

Harps had started the game well but once Galway got their noses in front, they controlled much of the opening half with Holohan, Ayunga and Murray all having chances.

The home side were presented with the perfect chance to draw level on 27 minutes when Eddie Dsane was brought down inside the area by Paul Sinnott. Dsane picked himself up and took the resulting penalty but saw his effort well saved by Conor Winn.

So when Dsane headed the Harps equaliser on 45 minutes, he was probably the most relieved man in the ground. And he had Caolan McAleer to thank for creating the opening when the Harps wideman blocked down a clearance on half-way and raced clear before delivering a delightful cross for Dsane to score.

Harps however, were dealt another blow early in the second half when Paddy McCourt picked up his second yellow of the evening following a foul on Colm Horgan.

With the best part of 40 minutes still to play, the home side’s task was suddenly made all the more difficult.

Galway almost added to their troubles within minutes of McCourt’s dismissal when Gallagher made a fine stop to deny Holohan a second.

The visitors, with the extra man, were well on top in the second half and they went back in front in spectacular fashion on 75 when Ronan Murray hammered home a free kick from 25 yards.

They were denied a third soon after when Ayunga smashed an effort off the post.

But they made sure of the points when Murray struck again on 83.