Task to stay up is getting tougher 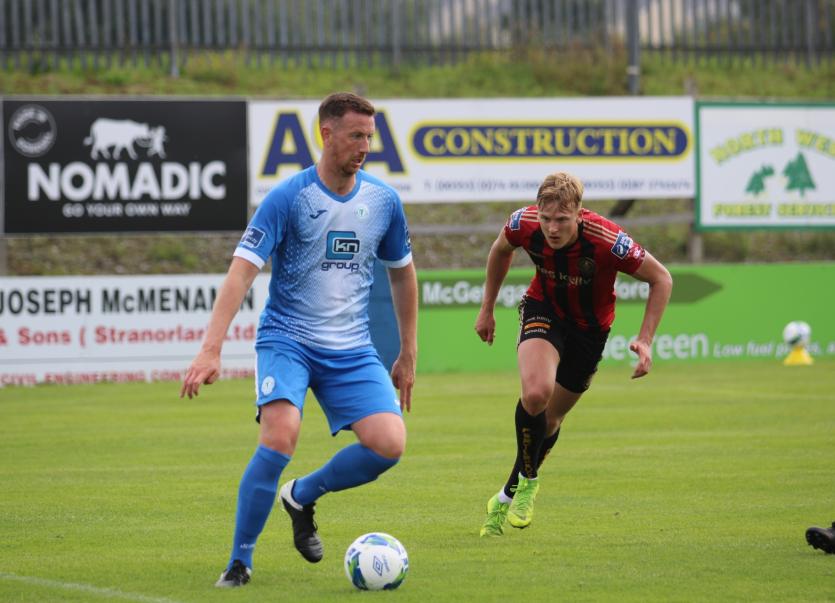 Finn Harps’ hopes of staying in the SSE Premier Division suffered another blow as they lost out to second placed Bohemians as a sun-drenched Finn Park.

This result moves in-form Bohs to within three points of leaders Shamrock Rovers, albeit with a game more played.

Bottom of the table Harps have won just once in eight outings and with two successive away games to come against Waterford and Sligo Rovers - plus a trip to Bray in the FAI Cup wedged in between - these are worrying times for the Ollie Horgan managed team.

Their next home game is against arch-rivals Derry City on September 13.

To add to Harps' woe on the pitch, Horgan, who had already been booked, was shown red late on and banished to the stands for some touchline protestations.

Harps, who had beaten St. Pat’s 1-0 in the Cup last Monday, made two changes with Barry McNamee and Shane McEleney in for Ruairi Harkin and Adrian Delap.

In a lively opening, Harps spurned a wonderful opportunity to take the lead in the third minute. McNamee, in his first start since the season resumed, whipped in a free that was headed back across the goal at the far post by Kosovar Sadiki, but the in-rushing Karl O’Sullivan was unable to connect from just a few yards out.

Shortly afterwards, Keith Ward, spotting Mark Anthony McGinley well to one side of his goal, stepped up with a quickly taken free that had the Harps custodian having to scramble across to get down and save.

Bohs took the lead on 23 minutes when Andre Wright found Danny Grant and he turned inside Sadiki before carefully placing his shot beyond the advancing McGinley.

The Gypsies, who fielded the same starting eleven as the side that triumphed 2-1 over Dundalk last time out, then went close on 34 minutes with Dan Casey’s initial effort being blocked, and both Andre Wright and Rob Cornwall were then both being denied by the Harps defence.

With Kris Twardek a threat on the right flank, Bohs looked the more threatening in attack for a spell but just before half-time, although Harps went close to an equaliser when the influential McNamee slipped the ball through to veteran Raff Cretaro but he was unable to score.

Harps had a minor scare five minutes into the second half when Dan Casey - who got away from his markers - rose to meet a corner but could only head wide from a promising position.

At the other end, from a corner McNamee found Stephen Folan just inside the Bohs penalty area and he lobbed in a teasing ball - but there was nobody at the back post to pose a goal threat.

The final quarter saw little in the way of goalmouth action with both defences on top.However on 86 minutes, Bohs had a real let-off when goalkeeper Stephen McGuinness failed to hold a corner ball but fortunately for the visitors there was no Harps player on hand to capitalised and the danger was averted.

Overall, while they didn’t create too many clear-cup chances, Bohs were the stronger outfit and left with the full points.

Harps didn’t lack effort, especially in the second half, but they could just not find any way through.