Damien McClafferty has been managing Bonagee United in the Donegal League for five seasons now. They've just booked a place in a first ever Brian McCormick Cup final and are riding high in the Premier Division. 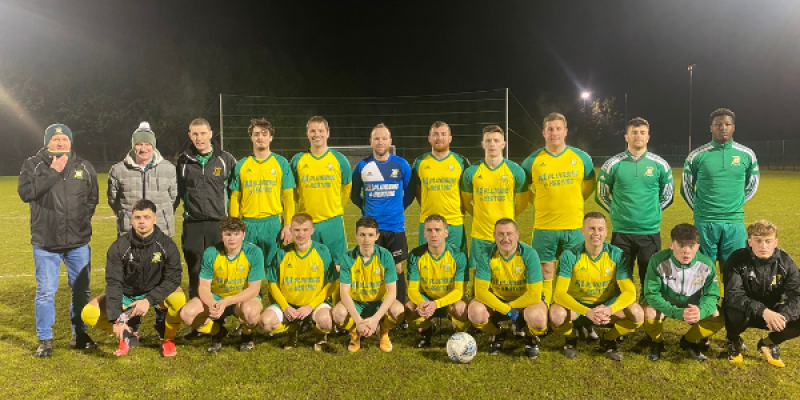 In his fifth season as manager of Bonagee United’s Donegal Junior League team, Damien McClafferty feels as if the blend is close to perfect now.

Bonagee won promotion to the Premier Division when winning Division One in the 2018/19 season.

Bonagee are perhaps something of a surprise second-placed side in the top flight. But they could go top this Sunday were they to beat Convoy and Kilmacrennan - who currently lead the way - fail to beat Kildrum Tigers.

Kildrum sit ominously back just seven points off Kilmac’, but the St Johnston men have five games in hand.

For now, though, Bonagee and the other title hopefuls have to keep putting points on the board.

“We’re second in the League, but we know it’s in Kildrum’s hands,” McClafferty admits.

“If we have a bad result, we could put ourselves out of the picture again for it. The Cup final gives us something to look forward to and hopefully will give us some momentum. It’ll keep us going to the end of the season now.”

Adam Murphy and David Boakye have graduated from their Donegal Youth League squad of 2021 to join Finn Harps, but McClafferty’s squad contains plenty of young blood with the likes of Sergey Alcorn, Aaron Wasson, Niall McCrossan and Evan McCroary all coming through the underage ranks of late.

The experience of the likes of McLaughlin, Eamonn Cannon, Darren Hunter, John Carr, Taylor Russell and Lee McMonagle - all mainstays in the yellow and green - gives McClafferty a rather neat mix.

“The energy and buzz that the youth players bring is needed in the team. They bring quality.

“We were maybe too experienced before, but we have legs now. We have energy. We have buzz.

“The quality is there as well. You still need the old heads too to get you through matches. They know how to win matches and they’ve been there before. Those type of characters you need.”

Brogan scored a delicious second goal late in the game at The Diamond Park. Brogan stepped in from the left to fire a superb shot beyond St Catherine’s goalkeeper Michael Mullin.

McClafferty said: “It was a great finish by Coady. It suits him cutting in from that left-hand side. He has that in his locker. He should be doing more of that.

“He has more ability in the locker and hopefully that’ll be a kick-start for him. He’s a finisher and has goals in him.

“I didn’t see our first goal coming. It was great play by Evan (McCroary) to make the chance for Aidy (McLaughlin). I felt that whoever got the first goal would win it. It was one of those games where chances were few and far between. We put away the chances and that was the difference.”

McLaughlin’s opener, in the 66th minute, came against the run of play with St Catherine’s having enjoyed a good spell without managing to break the deadlock.

“The scoreline flattered us a wee bit,” McClaferty admitted.

“John Carr made a one-on-one save early in the second half and that was a big moment. We came out slow after half-time and they started well. John pilled off a big save. I thought that one goal would win it. I think John is the best shot stopper in the League. I have no fear there.”

Whatever happens in the League, Bonagee have a big day out to punch into their calendars.

McClafferty says: “It’s been a good season for us so far. The boys are all pulling together in the same direction and we’re seeing the results. It’s good for the club and good for the team.”