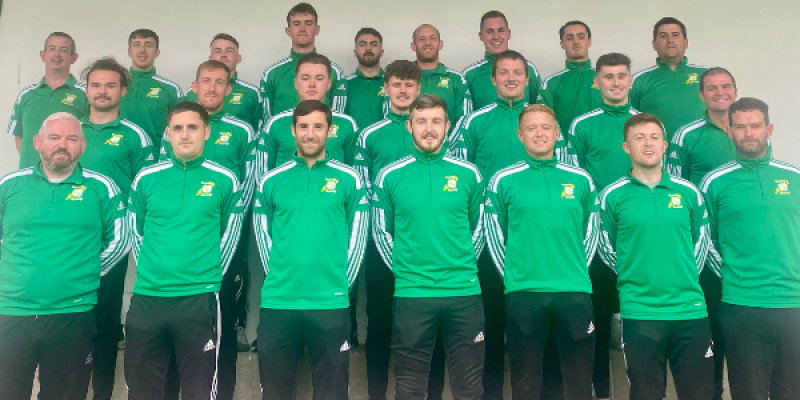 Jason Gibson got a measure of the progress made at Bonagee United this week.

As Gibson chewed the cud with a long-sanding committee member at Dry Arch Park, the realisation dawned.

His team have three cup finals in the next three weeks and they reached the last eight of the FAI Intermediate Cup. In the Ulster Senior League, Bonagee were pipped by Cockhill Celtic.

The first of the finals sees them face Cockhill in Saturday’s Donegal News USL League Cup final at The Diamond Park (kick-off 2pm).

“It showed how far we have come where we’re now expecting to get into cup finals,” Gibson told Donegal Live.

“We were disappointed that we didn’t run Cockhill closer in the League and that, again, shows the progress we’ve made.

“Being greedy, we want to win all the finals. We want to win as much as possible and, obviously, winning on Saturday would get the cup finals run off to a positive start.

“Mind you, I don’t like the fact that three results now can define a season. We’ve still had a decent season, regardless, if you look at the League and Intermediate run and we’re in three finals.”

Pre-Christmas, Bonagee defeated Cockhill 4-0 but the Inishowen side turned over their title rivals 3-0 in the return meeting at the Charlie O’Donnell Sports Grounds.

“There are usually fine margins and that’s what we expect this week, but the two League games were strangely one-sided,” Gibson said.

“I’m not concerned about this being a cup final and our capability of playing in a big game. The size of the game doesn’t come into it. These lads are used to big games now.

“They have played in big cup games and we’re well used to playing Cockhill. A couple of years ago, there was all ‘first this, first that, first other’, but hat has passed now and we’re well aware how difficult Cockhill will be.”

Bonagee are the League Cup holders and under Gibson’s management they’ve also won a Knockalla Caravans Senior Cup. In the coming weeks, they have another assault at the Knockalla Cup and will also contest the final of the North West of Ulster Intermediate Cup final.

“I’m a blow-in to Bonagee, but it’s great to see every part of the club being competitive now,” the Manor native said. “The Donegal League team is a game away from winning the Donegal League, the ladies are competing on all fronts and the youths are top of the League.

“The club has a busy month ahead, but these things are rewards for all they do for the club.”

Gibson expects to have close to a full squad available as they look to topple Cockhill’s bid for a League and Cup double.

Cockhill won six doubles in succession until 2018 and recently clinched a ninth USL title in a row.

The dominant force in the local intermediate scene over the last decade, Cockhill will look to reclaim the League Cup.

Laurence Toland, Jack Doherty, Oisin McMenamin and Ronan ‘Newman’ Doherty have been absent of late and are likely to miss this weekend’s final.

Keegan Hegarty returned to their XI at the weekend having come back from the United States.

The teams met in a low-key final USL game of the season on Sunday, Christy McLaughlin earning Cockhill a point after Peter Carr opened the scoring for Bonagee.

“I don’t think it will be looked at for a few years what we’ve really done,” Cullen said.

“There was one stage there where we went four seasons unbeaten. We have only lost one League game this season. At the height, we’ve only lost about ten league games in all of that time. It’s phenomenal.

“You have to set standards. Players set their own standards and the management do too. Anyone who comes in and doesn’t follow that, they don’t last long. They have come in and bought into it well.”